Apple’s stock got a nice bump of 6.5 percent yesterday following earnings that were less bad than expected. While that drove the company’s market value up to $564.34 billion, Apple still faces declining sales of its core products and investors who seem mainly concerned about stock buybacks and dividends.

A day later, however, Facebook reported stellar earnings, highlighting for me the notion that this is a company firing on all cylinders. Its stock got a less modest bump than Apple’s. But that go me wondering:

How big is the gap between Apple and Facebook? And could Facebook, or any other tech company, be in a position to overtake Apple in the coming year if its revenues and profits continue to tumble?

It’s hard to predict how investors might react to any given set of circumstances, of course. But I decided to look at four of the largest U.S. tech companies by market value: Amazon, Facebook, Alphabet (FNA Google), and Microsoft.

Starting with the day of Facebook’s IPO in 2012, each of these companies — led by Amazon — has seen its stock rise substantially more than Apple’s. And yes, that includes Microsoft: 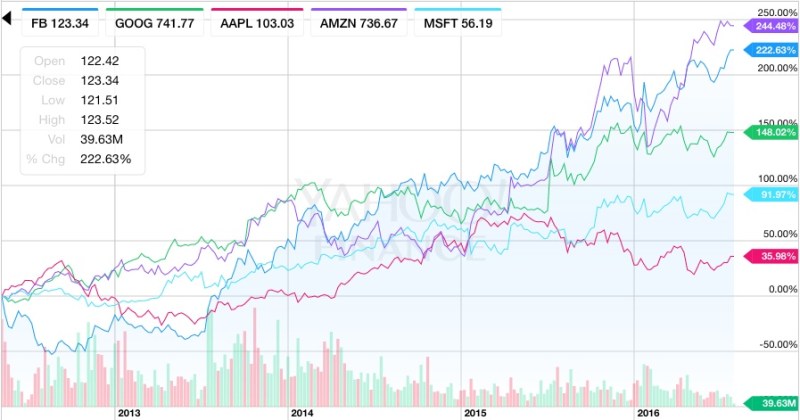 That’s even more true if you look at the past year, when Apple was the only one of these five to see its stock drop: 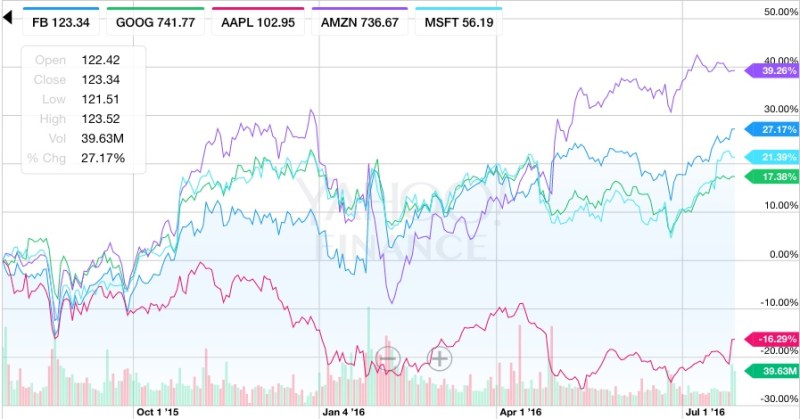 While each of these competitors has more momentum than Apple, they still have a way to go to close the gap on Apple’s $564 billion value. Here’s a look at where they rank (by order):

1. Alphabet/Google: $509.27 billion. Until Apple’s latest bump this week, the gap was not so big. And these two have traded places before in the rankings. But, as the Wall Street Journal notes, Alphabet/Google has fallen short of analysts’ expectation in 8 of the last 12 quarters. That skepticism has caused its stock to lag behind Amazon, Facebook, and Microsoft over the past year. And that lack of momentum counts against the fact that it’s the closest to Apple in terms of market share.

2. Microsoft: $438.73. Yes, it’s always tempting to overlook Microsoft, which long ago lost the title of most valuable tech company. But…its stock has still enjoyed a stronger year than Apple’s or Alphabet’s. And CEO Satya Nadella seems to be rebuilding a lot of goodwill. If the results continue to match that, it will be interesting to see if the company can make a run at regaining its crown.

3. Facebook: $352.79 billion. After a bumpy start following the company’s IPO in 2012, Facebook’s stock has been on a steady climb. There’s still a large gap to close if it wants to reach Google and Facebook, but Facebook has already cut deeply into it. And with smart acquisitions of WhatsApp and Instagram, the company’s reach is enormous.

4. Amazon: $347.58 billion. The Seattle giant is only just a hair behind Facebook, but its stock has even stronger momentum over the past year and four-year periods. So despite still being far behind Apple and Google, it’s far from out of the race. And with a hunger for both acquisitions and new products, Amazon certainly acts like it plans to become the world’s most valuable tech company.