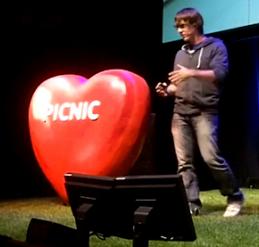 Location startup Foursquare is working on a new concept in its New York office — a recommendation engine.

Founder and chief executive Dennis Crowley described the project today while speaking at Picnic, an annual three-day festival for sharing concepts in Amsterdam. The feature, which is only an experiment at this point, takes advantage of the large amount of data that Foursquare has on its users and their friends. Currently, the feature tracks all the check-ins near the Foursquare office during lunch time, then creates a list of places. Foursquare determines which locations users have already visited, and it creates a final list based on where their friends have been and overall popularity.

While this is an initial experiment and very basic, you can see how this could blow up into a very useful and popular feature for Foursquare. Crowley continues with an example about how a person could walk down the street and have their phone, which knows you haven’t checked in anywhere for lunch yet, automatically alert them of a lunch place nearby where your friends may have eaten in the past and said they liked. However, having an application constantly asking for your location will in fact kill your battery very quickly. Crowley even notes that this is probably one of the biggest hurdles right now.

While the recommendation engine is still very much in its infancy, Foursquare continues to march on with additional features and functions. Today, the company announced a partnership with jogging application, RunKeeper, which would allow users to get badges for doing something, rather than checking-in. Also, a new version of its iPhone app now emphasizes the “to-do” list, which allows users to add a location to a to-do list and then receive alerts the next time you’re nearby.

As far as we know, none of the other location-based services competing with Foursquare, such as Gowalla or even Facebook Places, have been working on a recommendation engine, but we wouldn’t be surprised it they are.