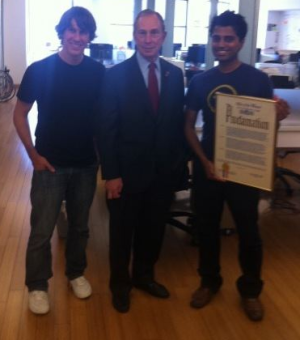 Foursquare is seeking a new round of funding estimated at $20 to $40 million, according to the Wall Street Journal.

Raising more money seems absolutely necessary for the location-based check-in service as it branches out to offer exclusive deals from local shops and restaurants — putting the company into more direct competition with group-offer sites like Groupon and LivingSocial.

While Foursquare has an active user base of eight million, the service has been unable to generate much revenue. The opposite is true for Groupon ($1.14 billion in funding) and LivingSocial ($632 million total funding), both of which have far more resources available.

By contrast, Groupon and LivingSocial rely entirely on the allure of deals from local businesses to generate revenue. Eventually, those companies will need to find additional hooks to keep customers coming back. Since Foursquare is a location-based social service, it doesn’t have that problem.

Foursquare is likely to use the additional funding to build out its new merchant platform, which allows local businesses to offer coupons and deals to consumers who check in when they visit. There are already over 250,000 merchants using the service, according to the company. But rather than focus on gaining users, the company would do well to figure out how to boost its revenue before the Groupons of the world turn into location-based social networks.