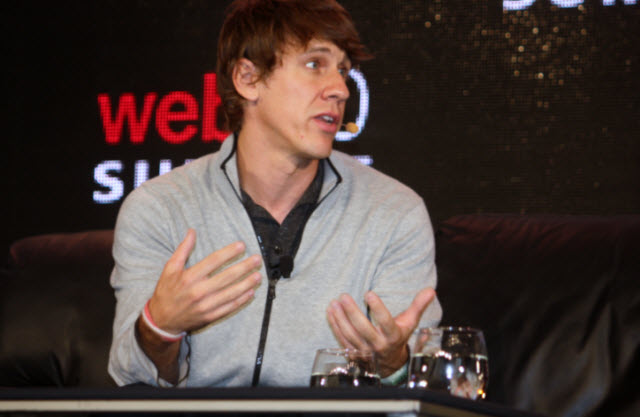 “We want to build tools that change the way all the people in this room experience the real world,” said Foursquare founder Dennis Crowley at the Web 2.0 Summit today, as he described his company’s retreat from the game mechanics that first made the check-in service a success.

With more than 10 million downloads, Foursquare is the category leader for location services, even as it moves away from its initial offering. Crowley said Foursquare is about much more than check-ins, and features such as Foursquare Radar and Foursquare Explorer are going to power even stronger user adoption in the future.

When Foursquare launched, there were already a variety of location-based services on the iPhone, such as Loopt. Since then, Foursquare has survived the onslaught of location service launches from juggernauts such as Facebook Places and Google Latitude, while also fending off rivals such as Gowalla.

Foursquare’s biggest strength in these battles was its singular focus on real-world experiences, while its larger and better-funded competitors had to cater to a wide set of use cases, such as Facebook’s vast developers ecosystem.

“We have a very narrow focus on building features that help people experience the real world,” Crowley said. “How we were able to survive the Facebook onslaught — that was a big motivating factor for the entire company.”

In spite of banner user adoption, Crowley said he can identify with newcomers who are still struggling to understand why they should use a check-in service at all. Crowley said when he first downloaded Twitter, it was 18 months before he really understood why the product was worth using, because he hadn’t discovered that “thing” which made it special.

He sees Foursquare the same way. One of its biggest hurdles is that people have to think about using Foursquare, and then make the effort to take out their phones and check in at locations. With Apple’s recent iOS 5 mobile operating system update, iPhone and iPad users have a much lower barrier to entry, which Crowley thinks will “juice” the experience.

Crowley also said that serving the needs of merchants alongside users has been instrumental in creating the Foursquare experience. And as any regular Foursquare user knows, beyond the bragging rights you get as “mayor,” an increasing number of businesses offer discounts or other physical rewards, such as t-shirts or branded bottle openers, for users who check in at their location.

“Merchants have been around for the ride from the beginning,” said Crowley, adding that for every three user features his team launches, there’s one new feature created for merchants. Crowley also said there’s a whole subset of people who no longer use Foursquare for the game dynamics and check-ins, but to stay on top of deals and special offers from favorite local businesses.

In spite of the change of direction, Foursquare is not abandoning game mechanics entirely. As the company continues to improve its recommendation engine and build out features for the next three years of growth, there will likely be time to revisit the checking-in game that made Foursquare such a hit.

“I’m a big believer in game mechanics to push people to do new things in real life,” says Crowley.