Foursquare may be in the midst of an interesting, local search-focused pivot, but can it actually build a business? The answer, it seems, is still up in the air. Just ask Foursquare itself.

“This gets us closer to being able to prove that there’s a real business here,” Foursquare CEO Dennis Crowley told Businessweek, referring to the $41 million his company just raised.

Here’s the problem, though: Foursquare is four years old. It has 33 million or so users. It’s raised over $100 million. Put in that context, Crowley’s statement is not only immensely worrying but it underscores the strange reality that Foursquare is still trying to prove to the world it’s a viable business.

This was pretty obvious from Foursquare’s unusual $41 million loan, which wasn’t accompanied by an up-to-date valuation (the last one was $600 million, but that was from 2011). And that’s a bad sign, according to analyst Rocky Agrawal.

“The fact that Foursquare wasn’t able to agree on a valuation means there’s still a big risk in this company — more than there should be at this stage,” Agrawal told VentureBeat. 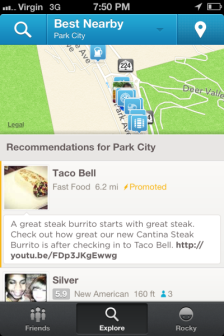 Above: TacoBell probably isn’t what most Foursquare users are looking for when doing local searches. (Image: Rocky Agrawal)

Earlier today, Agrawal was involved in a particularly interesting debate over Foursquare with GigaOm editor Om Malik, who, like me, is completely smitten by the Foursquare experience.

“I love it more than Yelp or any other service. I want foursquare to be around forever,” Malik tweeted.

But here’s the problem: A great app does not necessarily make a great business. We may love the Foursquare experience, but love doesn’t pay the bills — nor does it make  investors happy.

“There’s a fundamental disconnect between why people use the app and the ad structure Foursquare has set up. People use the app because they want local discovery, not advertisements from Chili’s,” Agrawal said.

(We’ve reached out to Foursquare multiple times with questions about this stuff, but the company has been slow in replying. Or something.)

That disconnect underscores Foursquare’s most fundamental problem: The company wants users to check in, discover, and explore, but very little of that is what’s going to make Foursquare the big bucks it needs to sustain itself.

These concerns are most apparent in Foursquare’s constant refusal to disclose how many people use the app each month. (When asked by AllThingsD, Crowley responded with a curt “We’re not disclosing that.”) In Agrawal’s view, this is a pretty clear indication that the numbers aren’t great.”If Foursquare’s numbers were bigger than Yelp’s, they’d announce them,” he said.

And then there’s the revenue question. According to Businessweek, Foursquare pulled in just $2 million last year, which isn’t terribly much considering it’s been around for four years.

All of which leads to one inevitable, crucial question: If this whole business thing doesn’t work out, what’s Foursquare’s exit strategy?

Agrawal’s take, which he shares with venture capitalist (and Yelp board member) Keith Rabois, is the buyout. “My best-case scenario is Yahoo would be interested in making a local play. Foursquare would be a good team to pick up with the team intact,” he said.

The prospect is both an expensive and unlikely one for Yahoo CEO Marissa Mayer, who has publicly said that Yahoo’s not interested in making any moves in local search.

Buyout or not, I’m not giving up on Foursquare, if only because it’s one of the few apps I use nowadays that I legitimately love. Love may not be enough to make Foursquare a sustainable business, but it must be worth something, right?