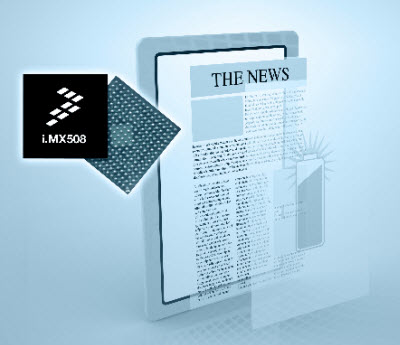 Electronic book readers are gaining so much traction that chip makers are starting to design custom chips to power them.

The latest example is from Freescale, which is launching the i.MX508 applications processor today. The chip uses an ARM Cortex A8 as its core brain and gathers a bunch of e-book functions together on a single chip. That eliminates other chips from the system and will help lower the cost of e-book readers.

The chip incorporates the hardware-based display controller from E Ink, which has created the popular display technology used in e-book readers such as the Amazon Kindle. Austin, Texas-based Freescale’s devices adds energy efficiency, cost savings and new features. The ARM core within the chip runs at 800 megahertz and has twice the performance of Freescale’s previous e-book processors. That means readers will be able to change pages faster. It also means they’ll be able to use advanced touchscreen features, color, and complex image processing. It supports display resolutions up to 2048×1536.

Freescale had about 90 percent of the e-book reader market — its chips are used in the Amazon.com and Sony e-book readers. Demand for e-book readers is expected to triple in 2010 to 14 million units, according to market researcher DisplaySearch. The Freescale chip can also be used in smartphones and hybrid devices such as smartbooks, which combine the features of phones and netbooks. The chip will cost less than $10 in volume quantities and will be available in samples in the early third quarter. Rivals include Marvell, which has also launched custom processors targeted at e-book readers.