Friendster, the social network that has been forgotten by many in the U.S., but which is thriving in Asia, is now opening its own developer platform, copying the move recently by popular site Facebook.

Third parties can build applications within Friendster, and can access the site’s user data. Other sites, from MySpace, Google to Hi5 are all planning similar moves. Friendster is letting developers start building now, but not letting the applications go live until November 30.

Friendster is a large and growing social network, with 26.5 million active users worldwide in September, according to Comscore, up from 15 million a year ago (see table, below).

The widget-makers that first built Flash widgets in Myspace, then built somewhat more complex applications in Facebook, are already pouring into the Friendster frontier, we’re hearing.

The key to success, as was seen during Facebook’s platform launch in May, is to get an application growing as soon as a platform launches. As RockYou and Slide showed then, an initially successful application can then serve as an advertising vehicle for the company’s other applications. As users use an application, their friends can see this (via feeds that track friend activity), and they may be tempted to try it, too. Applications can also market other widgets by including actual ads linking to them within the interface.

In other words, the more users an application gets, the more opportunity to continue growing. Successfully implemented, one or two successful applications can lead to an application empire on a social network. It’s a classic case of first-mover advantage.

Third-party developers know this, and some will go to extreme lengths — spamming users with scores of application invites, for example — to jump-start their user bases. This anti-user behavior was seen in the Facebook platform initial gold rush in May and June. One thing to watch upon launch is whether or not Friendster has watched and learned from Facebook’s foray — whether it will have designed the platform to protect users from this behavior.

The bigger play here is for the most successful widget-makers is to push their applications across social networks. RockYou and other ad networks like SocialMedia are making money by selling links and advertising space on the pages of successful applications. They’re selling these links to new apps, which buy them to get publicity. Slide, meanwhile, is experimenting with ways for users to include branded digital images within their Slideshow application. The more real estate on more social networks, the more space to test out these experiments in advertising.

Hopefully soon, we’ll able to see just how profitable these widgets can be. 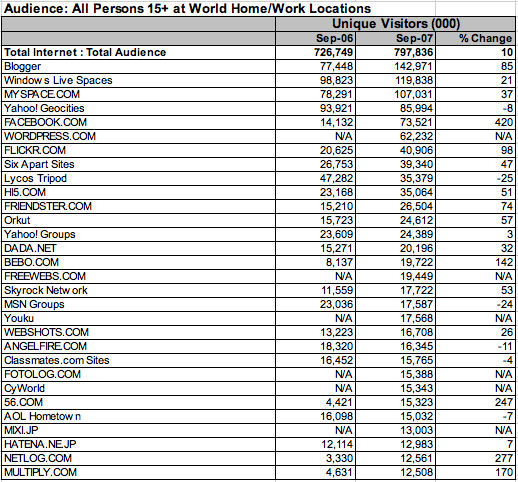