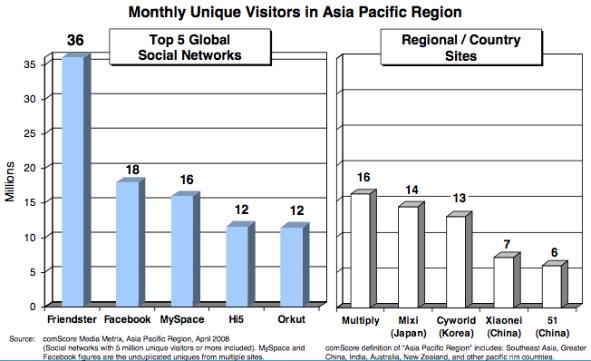 In the current international land-grab among leading social networks, Facebook is overtaking MySpace as the largest social network in the world. But there’s a big caveat — Asia — where a much-maligned older rival, Friendster continues to lead Facebook and everyone else by at least a two to one margin. The most recent data: This past April, Friendster clocked 36 million users in Asia, versus a distant second Facebook at 18 million.

And unlike social networking in the U.S., the opportunity in the Asian market is growing as more and more of the region’s 3.8 billion residents come online.

Friendster, because of its growth in Asia, has seen its user base nearly double from 23 million monthly active users in April of 2007, to 40 million users this past April, according to comScore. That growth rate seems to be increasing, as the company has added 10 million of those users since December. Friendster also points out that comScore doesn’t account for users who access the site through internet cafes. Internally, it says it sees range much higher in many countries.

Meanwhile, Friendster users are spending an average of 229 minutes on the site per month, the highest of any social network, according to comScore data from March.

This is looking more and more like a happy ending for the San Francisco-based company, which, as many of our long-time readers know, has seen many ups and downs over the years. Nearly from the start, it has been wracked by painful internal issues, including management conflicts, investor conflicts, technical problems, and mixed messages to its users about what was acceptable on the site.

It gradually ceded grounded in the U.S. to MySpace and Facebook, both of which now dominate the market here. But because the site had become popular with many Asian-Americans in the Bay Area during its early days, these users shared the site with family and friends in other parts of the Pacific.

A shot at the mainland China market?

The international friendships between Friendster users appear to be giving it an ongoing boost in Asia, with 23 percent of an average user’s friends located in a different country. This growth is happening across major Asian ethnic groups. With the site’s recent growth across countries, it may become the go-to social network for large portions of Asia, including Indonesia, Malaysia, the Philippines and Singapore

Most especially, it is the site’s popularity with Chinese speakers outside of greater China that may be give it a better chance of reaching users in the country. Among its international competitors, Facebook is contemplating how to introduce its Chinese-version site without inviting government censorship, and MySpace has been pumping money into its China site.

But life for internet companies in China is especially complicated. Domestic social network offerings from established companies like QQ and younger startups like Xiaonei and 51.com appear to have already grown prohibitively large. I say “appear” because there is little reliable data about any social networking traffic in China, so I — and many China observers I’ve spoken with — tend to doubt any internal numbers given by companies in the country.

The best shot at the rest of Asia?

Regardless of what happens in China, the site has already launched versions in both simplified and traditional Chinese, Indonesian, Japanese, Korean and Spanish. Today, it introduced a new version in Malay (see screenshot below), and has also recently added Vietnamese. It plans to translate the site into more Asian languages. Note: When I asked Friendster executives about its plans beyond Asia, I got a roundabout answer about Asia’s promise — so I’m guessing Asian users can expect 100 percent of the company’s attention.

The site has been aggressively launching other features, including a “fan page” for musicians and others to promote themselves to Friendster users similar to Facebook’s “Pages.” It has also been building out a developer platform, starting last October. We’ve been hearing positive things about it from some big third-party developers, including Watercooler (which counts Friendster as its second largest platform, with 1.5 million total users), Slide, and others. The platform has been live since December, and while it was developed before the Open Social effort to standardize developer platforms came into being, Friendster was a founding member of that movement. There are more than 350 third-party applications, with thousands of developers working on the platform, the company says.

Friendster’s executives attribute its recent growth to a composite of its demographics and new features like its pages and platform, along with its new mobile version. As we’ve written, large, web-based social networks appear to have a strong advantage over mobile-only social networks, so expect Friendster to continue to do well on this front, too.

There’s another interesting angle to Friendster, and it has to do with making money — but not ads. Many Asian gaming companies and virtual worlds are already basing large portions of their businesses on virtual goods. With an established user base of people who are used to spending money on virtual goods, the company is primed to introduce this sort of fea
tu
re. Maybe in the form of sending virtual gifts to friends for a small fee, like what Facebook already offers — but with a lot more users who care to do so. I’m not sure exactly what the company is going to introduce, at this point, as it isn’t saying much.

Meanwhile, as the number of internet users in Asia continues to grow — and gain more wealth, expect Friendster to do very well for itself. Indeed, if it maintains its lead in Asia, it may one day be larger than Facebook or MySpace.

Note: Friendster created the comScore-based graph at the top of the article. I’m using it with their permission. 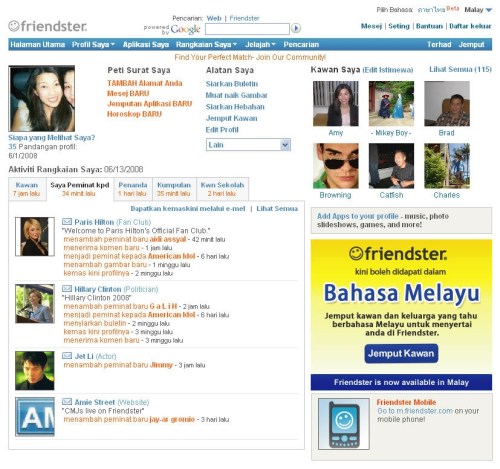