For those of us who live here, it may come as no surprise that Portland, the city of Roses, was recently awarded the top spot on Forbes list of best places for business and careers in 2017. Among the reasons Forbes cited was the Oregon city’s prevalence of tech companies and the jobs they bring taking root here. Portland has indeed been a hotbed for emerging technologies like immersive media and VR, the likely output of Portland’s quirky creative culture and the large community of young tech talent drawn to the area. However, Portland’s history with immersive media is much richer than some might imagine — dating back almost 100 years.

With the recent attention surrounding the potential of VR, there’s been an increased focus on immersive technologies of the past.  Lauded as the world’s first immersive media experience, stereoscopic images and the devices used to view them are experiencing a resurgence. One of the best known devices to view these types of images, The View-Master, was invented in Portland, Oregon by an avid photographer in the 1930s. Compared to today’s simple Google Cardboard viewer, the View-Master was originally created to view stereo images of tourist attractions and take the place or enhance the more traditional post card. Carlsbad Caverns and the Grand Canyon served as the first reels for these new, innovative immersive experiences.

Fast-forward almost 100 years and Portland has again given birth to a new way to explore the world around us. 360 Labs, a 360 degree film production company, has taken a page out of history by bringing the Grand Canyon to life with a VR documentary entitled “as it is”. The film works in web browser, in a Samsung Gear VR headset, or across global VR content platforms like VeeR, which are optimized for higher-end VR headsets such as the Oculus and Windows Mixed Reality headset. 360 Labs will be showing off this VR film at the upcoming Immersed Conference later this month.

Over the last several years, VR cameras that allow photographers to film environments in 360 degrees have gone mainstream, with even some smartphones now coming equipped with scaled-back versions of this capability. Almost anyone can take a VR video and post it or even livestream it on a platform like Facebook or YouTube, both of which support immersive video functionality. This certainly was not the case when the first 360 degree camera was built almost 25 years ago by another company founded in Portland, Immersive Media. 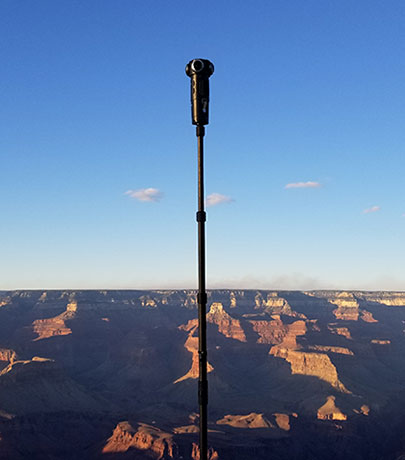 Above: This Z CAM S1 Pro Cinematic VR Camera was one of the cameras used to film the Grand Canyon VR documentary, “as it is.”

Immersive Media is the first production house dedicated to immersive commercial film. A few ex-Hollywood film professionals founded it in 1994. David McCutchen, founder and CTO at the newly formed Immersive Media, had developed a new video camera that could put the audience in the middle of the action. Originally developed to provide content for domed theaters in amusement parks, McCutchen believed his new camera and this immersive way to experience video was the content of the future. He convinced two colleagues to join him in starting up a business in Portland that would be devoted to creating immersive film, including the first immersive video movie, which was shot here in Portland in 1995. McCutchen chose Portland because he felt like it would be an easier place to grow and explore this new medium without the pressures and desperation of LA. 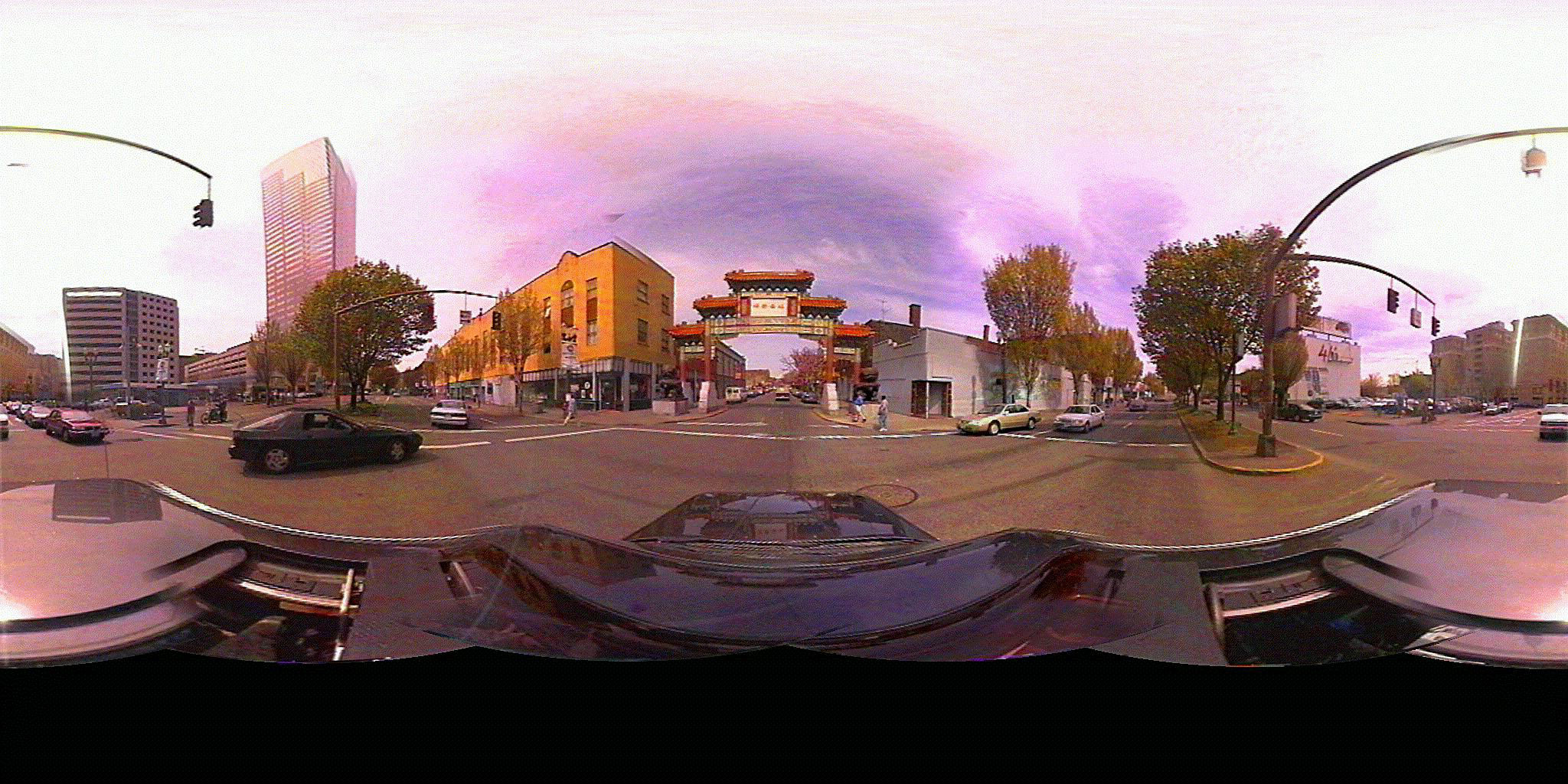 Static image from one of the first immersive films shot in Portland in 1997.

Many of the first films created with this new technology were filmed in Portland including a project for Intel that was developed to show off the computing power of the then-new Pentium processor. The 1997 launch event included approximately 20 demos that showcased case uses for the new, more powerful chip. One of these case uses included a 45-second immersive film from Immersive Media that captured Portland’s Chinatown district. The film was captured with their car-mounted camera and included inserted images that were superimposed over the walls that were filmed on Portland’s streets. This blend of real footage and inserted images was one of the first iterations of augmented reality, or enhancing our real environment with overlaid, digital content. 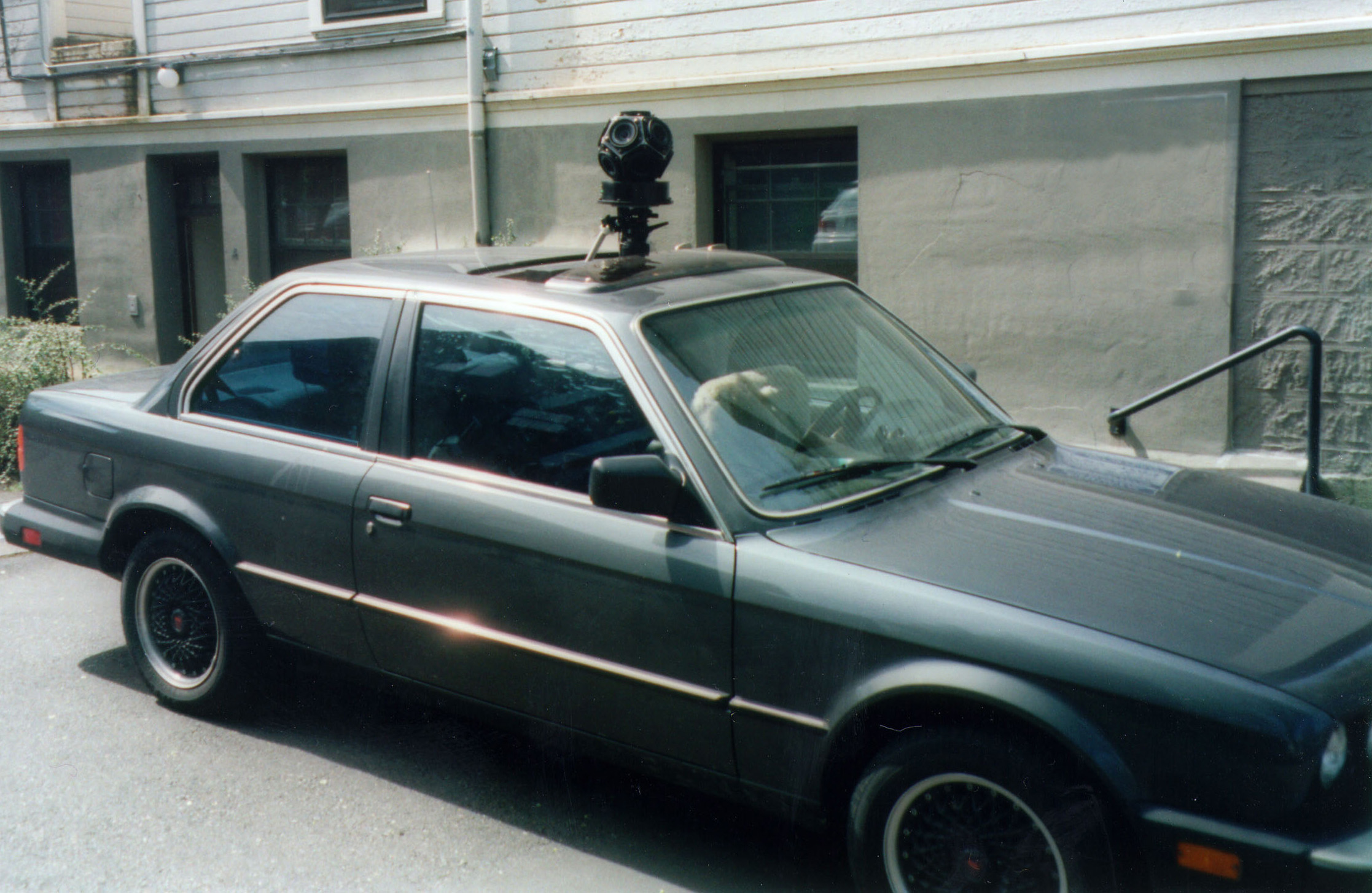 Above: The car and 360 degree camera used to film the project promoting Intel’s Pentium processor launch

Despite the interest that was generated by Immersive Media’s 360 degree films, they never reached a mass market. There were just too many barriers to entry for the average consumer and therefore finding the funds to produce the content became challenging. To engage with the short film, it required the viewer to download the asset from a physical CD onto the local hard-drive of a high-powered PC and then install a special viewer to enable the 360 degree mouse-view capability. According to McCutchen, “It was the usual problem with VR which is turning interest into business. We had no problem generating interest, the cool factor was never an issue. It was always about who’s going to pay for what. And that was the problem that VR was never able to solve and is still struggling with to this day.” 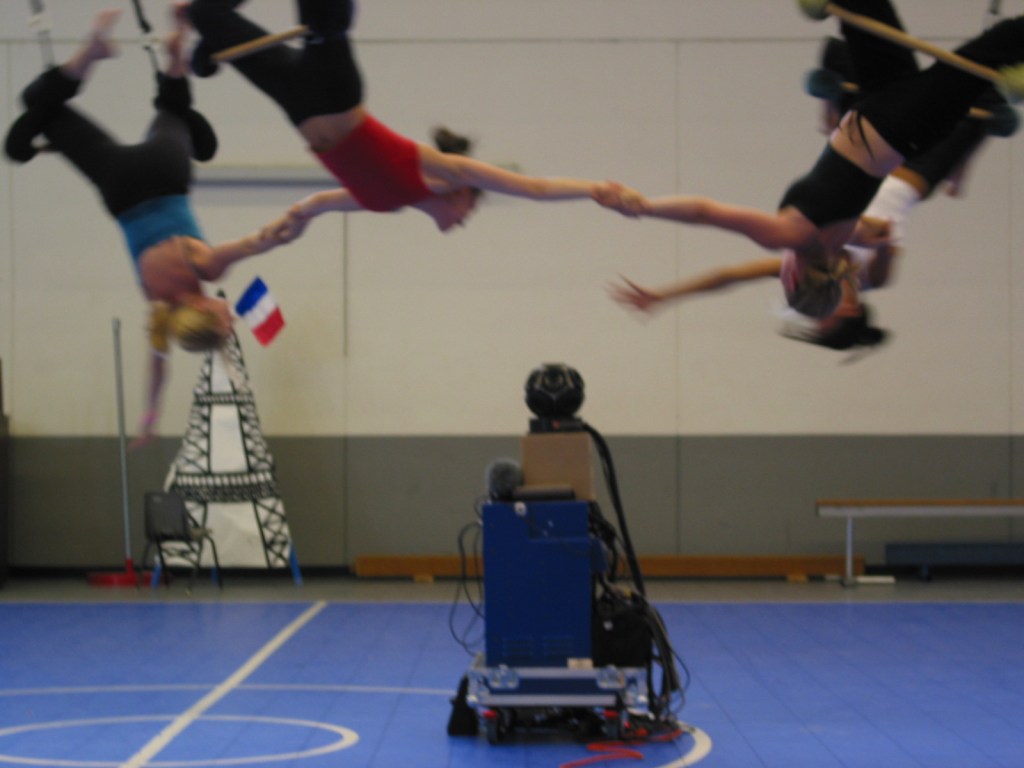 Above: An aerial dance troupe in Portland performs around one an early immersive camera in 2002

This obstacle didn’t stop David and his team from producing many immersive films over the years including working with artists, athletes and even Fox to feature behind the scenes footage at the Super Bowl. According to McCutchen, Immersive Media has a huge archive of immersive films with hundreds of thousands of hours of footage spanning two decades.

Lack of funds for the consumer applications of immersive film didn’t stop Immersive Media from slowly building a roster of clients interested in leveraging the technology for enterprise and commercial uses. Companies interested in high-tech surveillance like the military and CIA worked with McCutchen and his team and helped keep the lights on in the critical years. In 2005 Immersive Media had enough success with other business, entertainment and mapping work that enabled the company to go public on the Canadian stock exchange.

The Immersive Media team began to shoot city streets all over the country using their car-mounted rig. The idea was that the highly detailed footage would provide valuable details for mapping applications and Google agreed as they used Immersive Media’s technology and archive to launch their Street View product in 2007. Google Street View allows users to explore the world in 360 degrees using their smartphone. According to McCutchen, Google created their own simplified version of the technology using stills instead of the original video, to help make the content more accessible to a broader audience. At that time bandwidth and hardware couldn’t accommodate the fully immersive video footage that McCutchen’s team had been perfecting for over a decade. 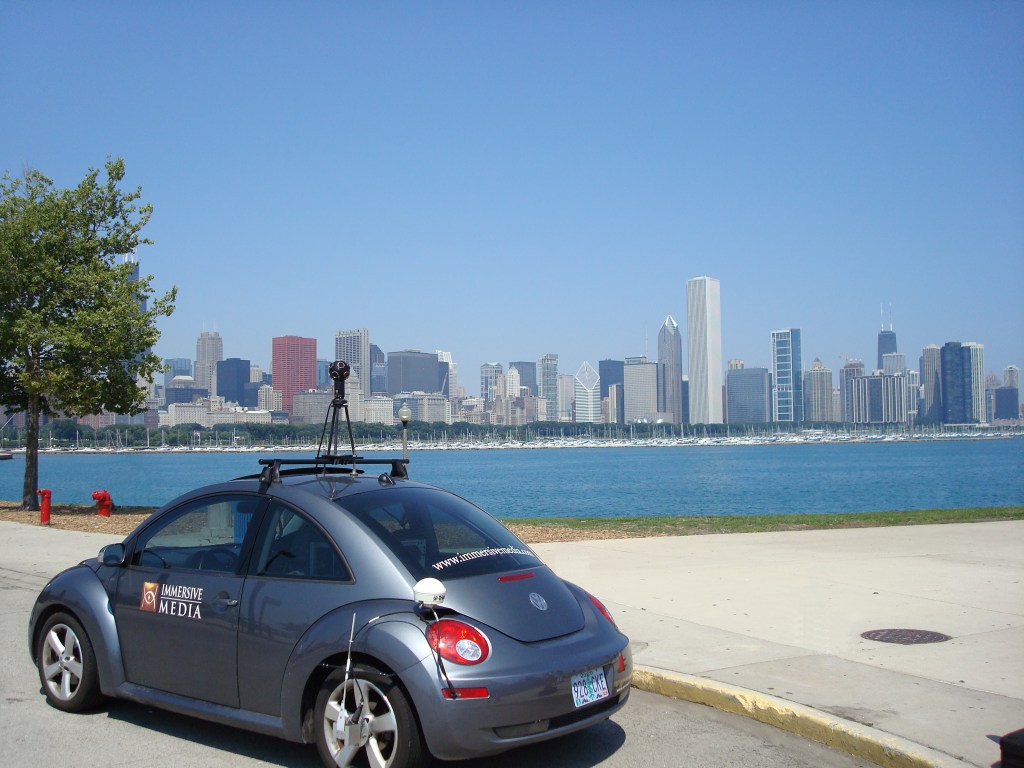 Above: Immersive Media’s technology was used to capture street view footage in Chicago in 2007.

With limitations on bandwidth and hardware becoming a thing of the past, McCutchen is excited about the new possibilities for 360 degree video. No longer requiring a high-powered PC, anyone with a smartphone can enjoy placing themselves in the middle of the action. He believes eventually all film will be immersive as playback devices such as VR headsets and AR glasses become more advanced, comfortable and affordable.

McCutchen still lives in Portland, and is a fan of the work of 360 Labs founder and President, Matt Rowell. Rowell started out shooting panoramic content in Portland for Google business listings and immediately fell in love with the new medium. In 2014 he partnered with two other panoramic photographers in the area and officially launched 360 Labs. Since then the VR projects have been rolling in as VR has become the new, ‘go-to’ medium for immersive storytelling. Rowell and his team will be demo’ing their VR documentary about the Grand Canyon at the upcoming Immersed Conference in Portland on April 21 and 22. The conference will focus on immersive technology both for entertainment and business applications.

Rowell, much like McCutchen 20 years earlier, could visualize the huge potential of immersive film and today technology has finally delivered upon that vision. He sums it up this way, “even on a laptop screen with click and drag I could see the possibilities for this new medium where every time you watch the video — it’s a new experience. From that point on I knew I wanted to shoot in this medium, we took a gamble that the resurgence of VR would give us a big boost, and it certainly did!”