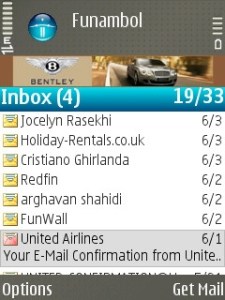 Funambol has raised $12.5 million in venture funding to fuel its open-source mobile messaging software business. On top of that, the company is announcing today that it’s landed AOL as a customer for its mobile synchronization software.

Funambol raised its second round from Nexit Ventures (which led), Castile Ventures, Walden International, and HIG Ventures. The new financing brings the total raised by the company to $25 million. The new funds will help the company expand in Europe and Asia.

Fabrizio Capobianco, CEO of the Redwood City, Calif.-based company, said Funambol’s software has been downloaded more than two million times, making it the top open-source mobile software. Mobile phone carriers put the “push email” software on their phones to create a free Blackberry-style functionality. With the software on a phone, users can have their corporate email forwarded to them on the go. That function has previously been the domain of high-end smart phones.

“We make email accessible on the 98 percent of phones that don’t have email capabilities,” Capobianco said.

However, there are plenty of other companies offering similar email capabilities, including Flurry.

He said that the company makes its money through its carrier edition, which can scale to millions of users.

The company’s name comes from the Italian word for tight rope walker. The company has 75 employees and most of its development team is in Italy. With the new funding, Nexit partner Michel Wendell joins Funambol’s board of directors, and Castile general partner Carl Stjernfeldt joins the board as an observer.