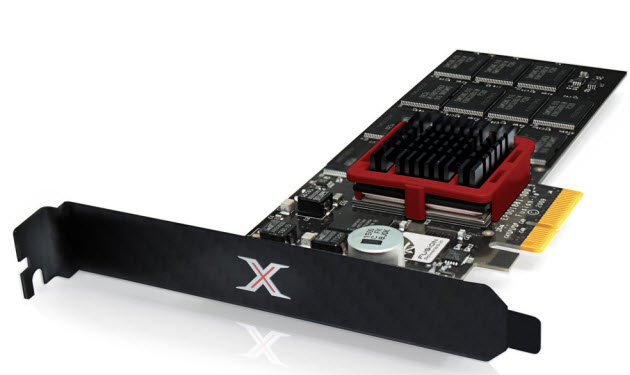 Fusion-io, a maker of super-fast flash memory modules, said today that its products can accelerate stock trading services by as much as five-fold. The company has shown that its ioMemory devices have been used by Credit Suisse to accelerate its trading platform.

While financial institutions could benefit from the use of flash memory in their data centers, so can a lot of other enterprises that need power efficient computing boosts. (See yesterday’s story on the growth of flash in data centers). With more efficient computing, companies can reduce power consumption, cut cooling expenses, and eliminate expensive storage solutions.

Flash memory is particularly important in algorithmic trading services, which use computers to decide what trades to execute and when to do them. The speed of the transactions depends on the average time it takes to save the data from temporary memory to permanent memory. Flash memory speeds that process by placing data closer to the processor that needs it the most. A single ioMemory module has the capacity of 100 traditional dynamic random access memory (DRAM) memory modules and the performance of 1,000 hard disk drives.

Marinela Tudoran, a tech executive at Credit Suisse, says that Fusion-io’s flash memory products will become more and more popular thanks to advantages in speed, capacity, endurance and simplicity. The Fusion-io products are memory modules that can be added into servers housed in racks within a big data center.

Fusion-io says its performance increases range from three times to 10 times, depending on the application. Salt Lake City-based Fusion-io, a veteran of the DEMO conference, was founded in 2006 and has more than 300 employees. The company was started by David Flynn and Rick White. Apple co-founder Steve Wozniak serves as its chief scientist.
Rivals include LSI and other memory chip makers. Fusion-io says it has more than doubled its revenues in the past year and has many of the Fortune 1000 companies as its customers. Customers include Zappos, MySpace, Wine.com, Answers.com, and the Lawrence Livermore National Laboratories.