But what about finding future founders?

That’s exactly what Danielle Morrill, founder and CEO of private company data firm Mattermark, recently attempted to do together with Bloomberg Beta, an early-stage investment vehicle spawned from the Bloomberg family of companies. Clearly, of course, VCs and angels would love to know who the potentially mega-successful founders of tomorrow are, today. 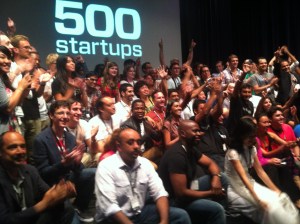 Anything to get a leg up in the uber-competitive world of technology investing.

“The goal of the project was to use big data, machine learning, and public sources of data to answer the following question: Who are the people who have not yet started a venture-backed company, who are most likely to start one?” Morrill writes in a blog post. “We started with people living in the Bay Area and New York, where Bloomberg Beta focuses its investing.”

The study considered a little more than 1.5 million people who are currently “connected to technology startups,” examining factors such as education, age, previous employers, seniority level, role, and geography, and comparing them to current founders of venture-backed companies.

“Based on the sample population of people related to the startup ecosystem who we included in our study, an individual in this group has only a 0.66 percent chance of starting a company,” Morrill wrote. “While we believe the future founders group has a 17 percent chance — 25x higher — that’s still going to be the minority of members of the group.”

[Editor’s note: Morrill revised the previous paragraph slightly, adding a qualifier about the sample included in the study; we’ve updated the paragraph to match her blog post.]

Bloomberg Beta has invited these 350 people to meet at private events to share the results with them — and explore the possibilities of starting a company in the future.

I wonder, of course, if this won’t turn out to be a self-fulfilling prophecy. If you’re told that out of 1.5 million people you were selected as one of 350 most likely to do something amazing, you’d probably change your behavior somewhat, making it more likely than you will actually do that thing. Something similar could happen here.

In any case, Morrill says that the most interesting data to come out of this study might not be the potential 350 future founders. It may just be a clearer picture of existing founders — and one that doesn’t always jibe with our 20-something single white male brogrammer stereotype.

Only 15 percent of venture-backed founders have a computer science degree, she says, and the much-derided management consultants are twice as likely to be founders as engineers. In addition, 38 percent of founders are over 40, and being “stuck” at a job or with a company for a long period of time does not kill your chances of founding a company in the future.