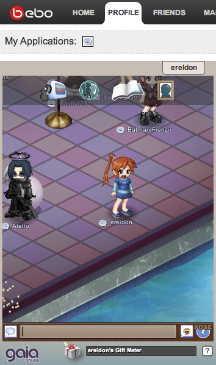 Social networks like Facebook and Bebo currently limit users and third-party developers from fully exporting most user data to other sites. However, there are a number of applications that are using these company’s social networking platforms to share data across sites, grow and even make money.

Virtual world Gaia Online, for example, recently introduced an application for Bebo that is now one of the social network’s most popular.

The trend of cross-site applications will pick up steam as social networks and other companies, including Facebook and Google, work to figure out more complete ways of sharing data.

The Gaia application, called Gaia OMG, lets Bebo users, mostly teenagers, sign in to their Gaia accounts while on Bebo, then interact with other Gaia users within the Gaia Bebo application — it’s a miniature, limited version of what you can do on the Gaia home site (see screenshot).

It launched alongside Bebo’s third-party developer platform last month. Now, the company says Bebo has gone from being the 430th largest traffic referrer to Gaia, to within the top ten.

This is easily monetizable traffic for the virtual world. Gaia users on Bebo must go to the Gaia home site in order to buy virtual goods, such as clothing for your Gaia avatar. Gaia currently has three million monthly users, and Bebo claims more than 40 million total users — and the two companies share a teenage audience — so the app is a clearly great market fit.

Other applications are also taking advantage of the Bebo developer platform, which closely mirrors Facebook’s. Bunchball, for example, offers Flash-based games that lets Facebook and Bebo users play each other from within either site. It tells us it averages more than 20,000 games played per day on Facebook, with around 10,000 daily active users. On Bebo, the company averages around 12,000 games played per day, with around 6,000 daily active users. See screenshot, below: 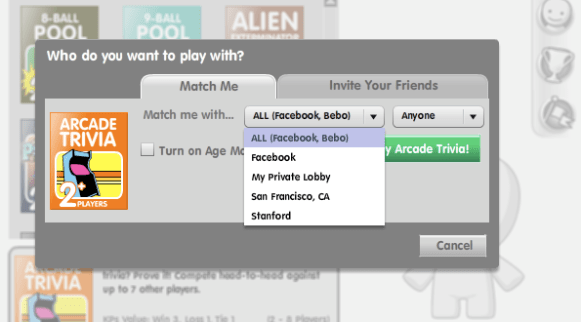 More than 150,000 games between Facebook and Bebo users have been played since the company launched its application on Bebo. Bunchball also integrates with other sites, such as Piczo and other sites, and says more than one million games have been played on it in the last thirty days. For more, see Mark Hendrickson’s write-up.

There are other interesting examples of cross-site applications emerging, such as Facebook application OutSync, which I first saw mentioned on Dare Obajanjo’s blog. It’s actually a combination Facebook-Windows application that shows you the pictures of Facebook friends who email you, within Outlook. More interestingly, it syncs with Windows mobile through your Exchange server or ActiveSync, so you can see photos of your friends during calls or mobile emails. It is compatible with Windows XP and Server 2003, and requires Outlook 2003 and 2007.