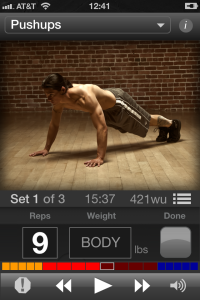 Gain Fitness, developer of an exercise application, wants to make personal trainer-quality workouts available to the masses. The San Francisco-based startup has raised a round of seed funding to develop a marketplace for fitness enthusiasts and professional trainers.

Today, Gain allows consumers to create fitness plans on its iPhone and web apps. The service is currently free to users, but Gain hopes to capture part of the $120 billion fitness industry with its next product release. In early January, the company will begin selling trainer packs, a bundle of exercises complete with audio and video. These packs, which could generate between 50 and 100 unique workouts, will likely cost between $1 and $5, said CEO and co-founder Nick Gammell in an interview with VentureBeat.

The app, initially tested by VentureBeat last December, now has more than 600,000 users. Gain’s users tend to be people who are already active but dissatisfied with their current routines and results.

Gain is not the only workout app on the market today. Competitors include Wii Fit and Nike Plus, and popular home exercise system P90X recently released an iPhone app. When asked what makes Gain unique, Gammell cited the company’s data-driven approach. The team of former Google employees has created algorithms to make Gain’s workouts more individualized and adaptive than the “out of the box” varieties offered by rivals, Gammell said.

The company, which currently has five employees, has raised $650K in seed funding from InterWest Partners and Seraph Group, along with angel investors including Keith Rabois, the chief operating office of Square. Gain previously raised $190K from family and friends.