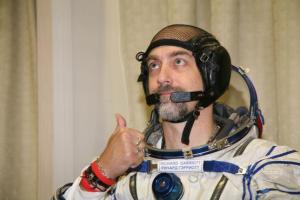 Richard Garriott is the first game designer in space. The creator of the Ultima series of video games was launched into orbit 17 hours ago with a crew aboard a Soyuz TMA spacecraft.

In a kind of marketing gimmick for his online game, the flight dovetails with the storyline of Garriot’s Tabula Rasa game,  which begins when aliens wipe out Earth. He’s taking the DNA of a variety of celebrities in a bid to preserve a “copy of the human race” at the space station. Garriott previously made an appearance on The Colbert Report after he promised to take Colbert’s DNA up into space. That’s pretty good publicity for NCSoft, the publisher of the game, but Garriott is paying for the $30 million trip from his own riches.

Garriott is the sixth space tourist to fly a rocket into space, but his mission is likely draw a lot of attention from around the globe. As the son of NASA astronaut Owen Garriott, he’s the first second generation astronaut. You can track his progress on a web site. 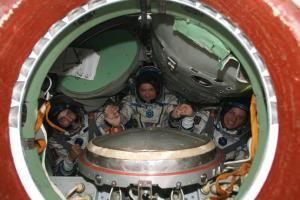 To prepare for the flight, Garriott went through cosmonaut training at the Yuri Gagarin Cosmonaut Training Center in Star City, Russia. The company that put him in orbit, Space Adventures, started launching privately funded spacecraft in 2001, when Dennis Tito went up. It has since become the ultimate vanity adventure.

But Garriott also plans on doing some research up in the space station, including taking pictures of the earth that can be compared to the pictures that his father took 35 years ago. The Nature Conservancy will analyze the pictures on its site to determine how much Earth’s landscape has changed in a generation.