For many people, working in the gaming industry is a dream come true. Until recently, I was one of those people: a four-year industry veteran at Riot who was both vocally critical of my industry and yet thoroughly enjoyed my job. But what many people don’t know until they’re on the inside is how quickly that dream can become a nightmare.

If you work in the industry, I probably don’t need to explain how we workers are exploited by companies, only to turn around and be abused by the very communities we want to make games for. But let’s run through a few key points.

Let’s start with the most recent abuse: Telltale Games. Telltale recently laid off all but 25 employees — 90 percent of its nearly 300-person studio, without offering any severance (and health care only through the end of the month — one more week). Many of those employees were contractors, and thus they will have a harder time filing for state unemployment benefits.

Layoffs are an inevitable part of doing business, but in this case it appears that Telltale acted negligently. Despite knowledge of their impending contraction, as recently as this month they had continued to hire new workers — people who left other jobs or moved across the country for a new position at Telltale. They now live unemployed in one of the most expensive metropolitan areas in America, some of them with spouses and children to care for.

What recourse do those workers have? None. Telltale has screwed them over and left them high and dry.

The gaming industry is overwhelmingly male (despite recent improvements), and many racial minorities are severely underrepresented. This is nothing new, as a quick search for “kotaku sexism” or “polygon racial diversity” will reveal.

And while most companies will be quick to pay lip service to their support for increased diversity, many workers in the game industry who have spoken up about sexism or racism in the industry have found themselves out of the job, as a quick search for “game worker fired” can attest to.

Jessica Price found herself on the involuntary end of a departure from ArenaNet after she complained vocally about the subtle misogyny/mansplaining of a response to a Twitter thread she’d posted. Her coworker, Peter Fries, was also exited after he stood up for her.

These firings are often motivated by a sexist internet mob, and they dramatically harm attempts to advocate for diversity in the gaming industry, as the most vocal advocates quickly find themselves muzzled for fear of losing their jobs. And when they do speak up?

Working in the gaming industry often means dealing with a pretty intense amount of public hate, especially if you work on core gameplay decisions, or if you are a woman or person of color.

While “disengage” may seem like the obvious answer, game companies often encourage their workers to get in front of player hate, under the assumption that more responsive employees “humanize” the company. This is especially true for developers, community managers, and comms workers, who often cannot do their jobs appropriately without engaging directly with players.

Circle this back around to Price’s firing, and you can see the deadly cycle that game workers are forced into: Either remain silent on issues of diversity and keep their heads down, or risk a single impolite engagement with a sexist troll on the internet costing them their job. 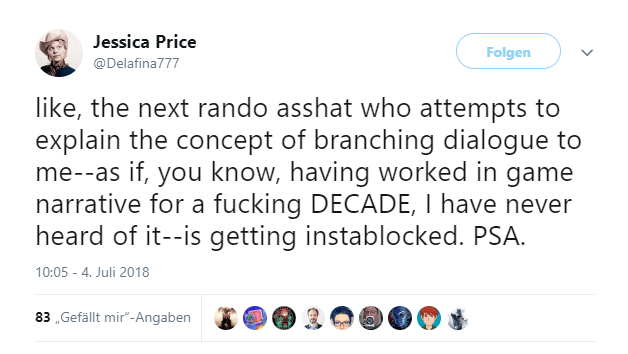 In Price’s case, it was using the word “asshat”. As Rock Paper Shotgun so clearly put it, “ArenaNet’s decision to fire both Price and Fries reinforces that standard: If you are a game developer and you are regularly patronized and harassed, then you should stay silent. If you speak out against that treatment  —  or even simply defend a colleague who is speaking out and asking that they be treated with respect  —  then that constitutes ‘attacks on the community’ and you will be fired, because ArenaNet value the community more than their developers no matter how that community acts. … They’ve written a blank check to Guild Wars 2 players who believe they should … be able to exert ownership over developer’s personal lives.”

Game industry workers are expected to work long, unpaid overtime hours. While at many game companies, crunch is a temporary state, at many other companies it’s a constant state of being. Despite rants about how good game workers have it, the gaming industry is a job like any other, and deserves job protections just the same.

The destructive and abusive effects of crunch have been detailed by Kotaku, Game Informer, and even the New York Times. But the short of it is this: extended overtime is bad for employees, increases burnout, and probably doesn’t actually increase work output.

Employees are full-time, long-term workers who carry out the regular business of the company. Sometimes, a company needs workers with an entirely different skill-set for a one-time project, workers they wouldn’t want to employ year-round. For that, they hire contractors. Contractors cover their own expenses, often not receiving the same benefits as full employees, but have much more flexible scheduling.

In recent years, game companies have joined the trend of playing a bit of sleight-of-hand: hiring contractors to do the work of full-time employees. This allows them to fire them at will and avoid providing health care and other employment benefits, with the overall result of making game industry jobs less stable.

California’s Supreme Court recently tightened restrictions of who can qualify as a contractor, which is progress. Then again, California is also an at-will employment state, meaning you can fire somebody at any point with no notice for any reason.

Why do workers put up with this?

The “why” is simple. Employment is a relationship of power. Who is more powerful, a company or one of their employees? The answer is painfully obvious, in most cases. And as a result, most workers have little choice but to accept the offers before them.

Want a contract that guarantees severance if you’re laid off, or guarantees that you’re paid overtime during crunch? There are always other workers who could replace you.

Have complaints about women or people of color being underrepresented or mistreated? You’ll be told that if you leave (whether you’re a member of a marginalized class or an ally), you’ll only make the problem worse by your departure. (After all, the company values you. Keep your head down! The company is working on improving, and don’t you want to be there to see those improvements to fruition?)

This is even worse in passion industries (especially entertainment), where you’ll be told that perhaps you’re not dedicated enough to the company, and that there is no shortage of people who would love to have your job. Besides, isn’t working in the gaming industry a privilege?

In other words: You are replaceable. So sign the contract or they’ll find somebody who will. But while one individual worker may not have much power, a collective group does.

I’ve used the word “union” in the title, but honestly any form of collective bargaining or advocacy is valuable, whether it’s an identity group based around gender or race, a worker’s cooperative, or a proper union. That way, when you have concerns, it’s not just you going to your company or manager — it’s your representative, who stands for the whole group.

*Important caveat: I think collectivism is important for all industries, some even more so than in the games industry. Luckily, many of our most critical industries are already partially unionized: teachers, nurses, firefighters, and other public services. My experience is in the gaming industry, and so that’s what I speak to and fight for, but I have no doubt that these problems are endemic throughout all industries, especially passion industries.

Firing and retraining people is expensive. Companies don’t want to replace all of their workers all of the time because it’s bad business. So they have to prevent those workers from leaving, and they often do it by making it hard for employees to talk about the common frustrations they share. And that brings us to …

Nondisclosure agreements (and their horrifying cousins, nondisparagement agreements) are the strongest tools companies deploy to keep silence about their work conditions.

When people leave under particularly concerning conditions, their first thought is often “oh, no, how am I going to pay rent/eat!” That’s when their former company slides X months’ pay in front of them and says, “It’s yours, as long as you promise to never talk about our company again.”

So if you notice that the most outspoken critics of a gaming company (or the gaming industry) fall silent the moment they leave their company, now you know why. We need to start talking about these problems as an industry, and that means banding together as workers, and not avoiding awkward or scary conversations.

When it comes down to it, a union is just a group of workers fighting for each other as a group. It’s somewhat like when a lion attacks a herd of gazelles. Whichever one gets picked off is probably fucked. But when they stay in a group, the lions know best to stay away. Unions are those groups.

Unions will not save the workers laid off by Telltale or any other company. But what collective organizations can do is exert power within a company to ensure that workers have more ability to speak up and push to change their conditions.

For example, a women’s advocacy group within a company can push for better working conditions and a more proactive hiring pipeline that prioritizes seeking out women in the industry. Same goes for LGBT or racial identity groups.

But where unions are even better is that they have legal recognition by the government. If you end up having to take your company to court, that legal recognition (alongside the paper agreements your union makes with the company) will come in quite handy.

What can unions advocate for?

Unions have a storied history in some of our most important professions: teachers, nursing, firefighters, and other public servants. SEIU and AFL-CIO continue fighting for workers today. But unions didn’t start losing the fight for better jobs because they’re an obsolete tactic. They started losing because they lost manpower, and our wage inequality has risen as a result. 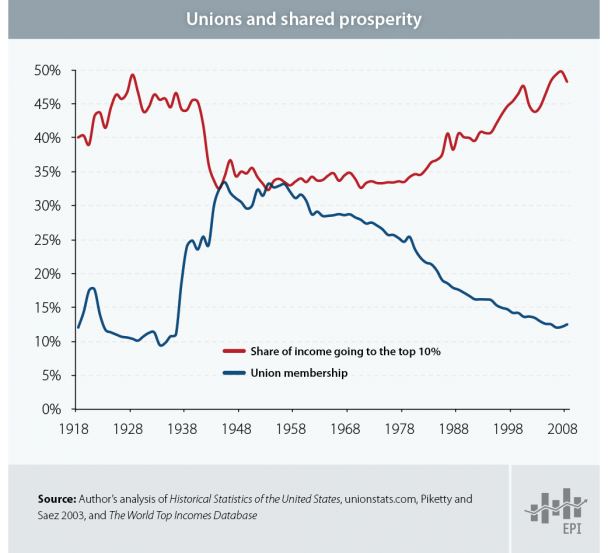 Above: Unions and shared prosperity

As union membership has declined, workers’ share of the pie has declined along with it. It’s time to reverse those numbers.

Individuals can only do so much. That’s why I’m putting my time towards Game Workers Unite to advocate for unions in an industry I love. Together, we can make game developers’ lives better — and happier developers means better games.

Mattias Lehman is a former Communications Associate, Playtester, and Esports Journalist at Riot Games who spends his spare time advocating for unions in the gaming industry.