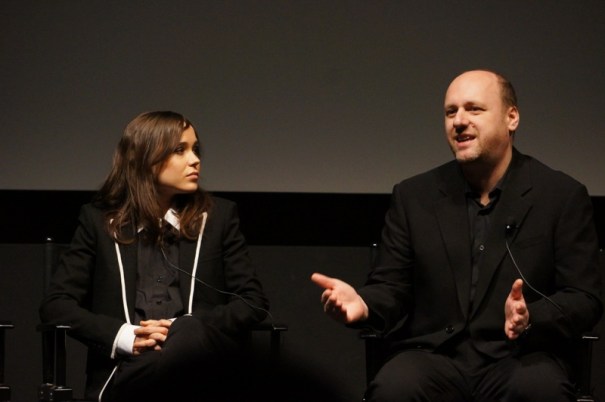 Note: This article contains spoilers from more than 30 minutes of Beyond: Two Souls gameplay.

Beyond: Two Souls is the first game I’ve seen that lets you play through both a suicide attempt and the birth of a child.

It’s a game that asks big questions about life and death, all the while straddling the line between “game” and “cinema.” None of that is surprising since it comes from the mind of Quantic Dream’s David Cage, who’s known for pushing gaming narrative boundaries with titles like Heavy Rain and Indigo Prophecy.

Judging from the 35 minutes of footage I saw last night at New York City’s Tribeca Film Festival (available in its entirety below), Beyond’s gameplay can easily be enjoyed as a dramatic film, as well as a thrilling game experience. [A new trailer for the game also premiered last night.]

The PlayStation 3 title stars Ellen Page (Inception, Juno) as Jodie, a young girl with a mysterious connection to an entity she calls Aiden. She also has a close relationship to a scientist played by Willem Dafoe (Spider-Man, Antichrist). Jodie’s life is in shambles, and you’re joining her on a journey of self-discovery.

Sure, you’ve got occasional flashing buttons for quick time events (in gaming parlance, these are buttons you hit to complete specific actions during cut scenes) and a disembodied entity that lets you manipulate the game’s world. But, for the most part, Beyond: Two Souls presents a strong story that’s well written, well acted, and well directed.

It seems Cage’s ambitions of delivering a story cinematically through games have come true.

It’s a snowy night. We find Jodie sleeping outside on the city street. It seems she’s been homeless for a while now. She struggles to get up, and slowly makes her way to a phone. She calls a friend, possibly her only friend, Nathan Dawkins (Dafoe).

“They’re all around me,” she says. Despite Nathan’s pleas, she doesn’t give up many details about her situation. It’s just a check-in call. She hangs up — and with little energy left, collapses on the street.

Jodie’s eventually saved by Stan (played by Eric Winter), a kind-hearted homeless man who nurses her back to health. But after finally recovering, it’s not too long before Jodie tries to kill herself by stepping off a highway overpass (You also have the option of not trying to jump). Aiden, her mysterious spiritual friend, saves Jodie, but she’s none too pleased.

“I’ve been running for weeks, and for what?” she cries. “I have no home, no money, no food. My life is a fucking disaster. I’m tired of life, I give up.”

Suicide is rarely a topic in games, but in this scene you can feel Jodie’s desperation. For her, life is a curse.

The suicide attempt is made even more poignant with a later scene, where Jodie helps a homeless women deliver her child. Amidst the filth of an abandoned building and Jodie’s own desperation, life is born. (It’s reminiscent of a similar scene from the film Children of Men).

The footage is full of beautiful moments, as well as shocking ones. In an effort to earn some money on the street, Jodie picks up a guitar and sings a mournful rendition of Beck’s Lost Cause. Later, after Stan is jumped by a group of punks, Jodie delivers an ass-whupping of Jason Bourne proportions. (I love the fact that she’s strong on her own, without always needing Aiden’s help.)

When the gameplay footage ended on a cliffhanger, you could feel the audience’s anticipation to learn what happens next. That’d be a decent accomplishment for a  film — but for a game that’s meant to be played, it was astounding how much Beyond was able to rope us in simply based on watching it.

In a Q&A session after the footage screening, Page admitted she hadn’t played a game since Crash Bandicoot, but she found herself astounded by the world Cage had created. It also took some time for her to get used to acting with 90 motion capture dots on her face (though she noted that getting prepped with mo-cap equipment wasn’t much different than makeup for a normal film).