Game of War players are spending a ton of money, but traditional console gamers still spend more than their mobile counterparts.

The average paying player on mobile spends $86.50 per year on in-app purchases, according to research firm Slice Intelligence. That’s right behind the $91.58 average revenue per paying user (ARPPU) for consoles. That’s a difference of a measly $5, and it explains why developers are aggressively pursuing the smartphone and tablet market. Additionally, certain games have shown that dedicated players will spend way more than that average. Game of War: Fire Age from developer Machine Zone draws an average of $549.69 per paying user. That’s more than any other mobile game, and that’s enough to make the game one of the top-grossing apps in the $34.8 billion gaming business on iOS and Android.

A $550 annual average is insane, but Machine Zone has definitely mastered certain aspects of getting people with a lot of money to part with huge chunks of it. A big part of this, as analytics firm ThinkGaming points out, is that Game of War has a lot of depth for big spenders. The app has a multitude of systems that players need to engage with to ensure they have an army prepared for the next big multiplayer battle. But those systems are slow, and players can speed them up by spending cash. Of course, a lot of games do stuff like this, and part of Machine Zone’s success is that other studios haven’t figured out how to duplicate its money-making techniques. It’s also likely that Game of War has a disproportionate number of whales compared to those people who put just a few dollars in. The game heavily favors big spenders, and the top whales are a hundredfold more powerful than the common player who puts little or no cash into Game of War.

“Most of us think of hardcore video gamers as those paying extravagantly for immersive and complex games, but data shows that mobile gamers are in fact the big spenders,” Slice analyst Taylor Stanton wrote in a blog post. “The mobile game with the largest average in-app spend is Game of War, where players spend, on average, $550 dollars to insure their army conquers the competition. What do Game of War gamers buy? Crates of gold, with the average item price hovering at $52 dollars.”

Slice provided a list of some of the top mobile games in the world and how they perform against the average ARPPU: 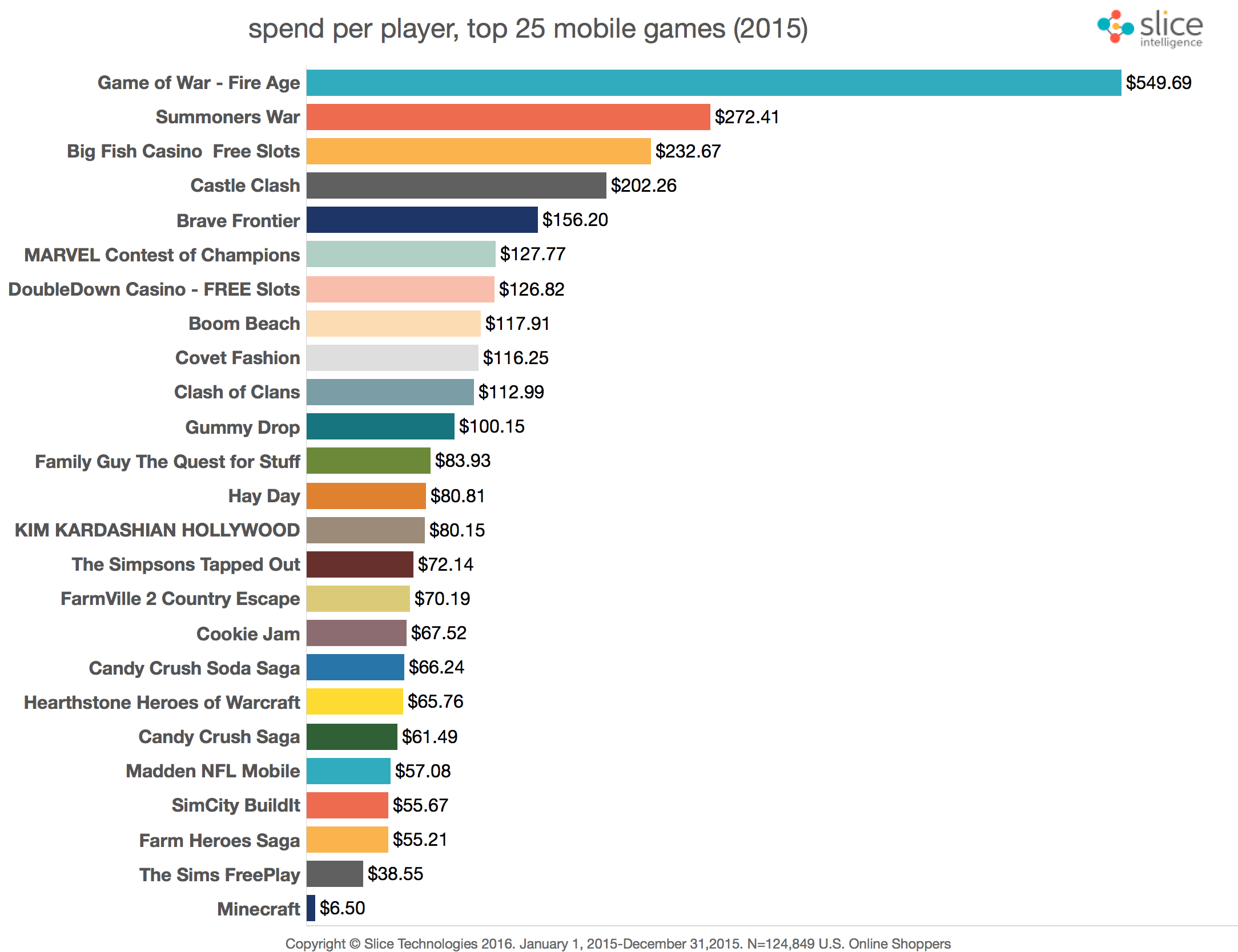 Above: Game of War has an insanely high average revenue per paying player.

Finally, Slice points out that the majority of gamers prefer spending their money either on mobile or on PC/consoles. The firm found that 43 percent of paying gamers only spend money on their smartphone apps. That number drops to 37.8 percent for console-only spenders. Finally, just 19.2 percent spend on both smart devices and traditional platforms.

That last category will likely continue to grow as younger people continue to encounter games first on iPads and other tablets, but — for now — it’s easy to see why game developers are all looking to carve out their own niche in the $99.3 billion worldwide gaming sector.