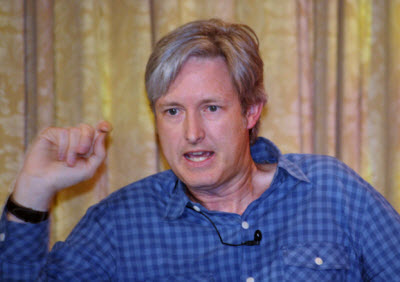 With more than 25 million units sold, the iPad has become much larger than a number of other historic game platforms (the Sega Dreamcast sold about 8 million units). As such, it’s helping Apple to swing developers back into its fold, according to a recent survey by Flurry. Android tablets are expected to catch on at some point as well.

“I think this is going to be incredibly disruptive,” said Giancarlo Mori, chief creative officer at mobile game publisher Glu Mobile, speaking on a panel at VentureBeat’s GamesBeat 2011 conference last week. “It’s fueled by the desire to have your gaming device with you at all times.”

In our panel on the Rise of Tablet Games (moderated by George Jones of Tab Times), Julian Farrior (pictured), CEO of Backflip Studios, which has sold more than 100 million mobile games, said that current mobile games sell about 10 times more on the iPhone than they do on the iPad. Still, he is “extremely bullish” because the iPad has higher average revenue per user (ARPU), higher advertising revenue, and a longer duration of game play. Backflip’s Army of Darkness Defense tablet game has a 42 percent higher ARPU with iPad users than iPhone users.

“I love where these trends are going,” he said. “The duration of play is 32 percent to 36 percent longer. If the trends continue, they could be as important as my iPhone game business.” 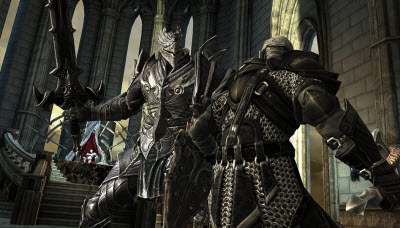 The iPad has a big screen and decent screen resolution to support cool games such as Chair Entertainment’s Infinity Blade (pictured right) a fantasy combat game that uses the high-quality graphics of the Unreal Engine from Epic Games. Farrior said his company isn’t making iPad-only games yet, mainly since it is easy to make a game that runs both on the iPhone and iPad. Nor has Backflip made any games to run only on Android tablets.

But the technology trends are obvious, now that Apple has produced the iPad and the iPad 2. He agreed the tablets will be like consoles in two years and laptops in five years. Every year, the tablet technology will get exponentially better, Mori said.

That is forcing game developers to step up their game quality. Developers have to pour a lot more money into art resources to take advantage of the device’s better screen resolution, Farrior said. Farrior predicts that high-quality web games, such as League of Legends from Riot Games, will likely be adapted to run on tablets in the not-so-distant future.

Baudouin Corman, vice president of publishing in the Americas at Gameloft, said Gameloft has more than 20 games on the iPad and is equally bullish about it. Sales per device are much higher on the iPad. Both family-oriented and hardcore games are selling well on the iPad, he said.

Mori at Glu Mobile, said there are more mass market gamers on the iPhone and more hardcore gamers and early adopters on the iPad. Every game Glu publishes for the iPad is tuned specifically for that platform. Mori said gamers play the iPad games for a longer period of time too. Strategically, Glu is focused on making use of the iPad’s high-quality specifications for graphics and speed. He thinks busy users like himself play more games now than they ever did because the device is so easily accessible; it can turn on with the tap of a button and launch games immediately.

For Android tablets, Mori said there isn’t a huge difference in the type of player compared to the iPad.

At some point, more players will enter the market. Hewlett-Packard has launched its webOS-based tablet, and players such as Intel and Microsoft are likely to make their own bids to create new tablets as well.

“If it’s not in the market yet and doesn’t have significant market share, it’s not top of mind,” Farrior said.