We’ve booked them. GamesBeat 2014 will have 101 speakers who comprise our strongest line-up in the event’s six-year history. It takes place Sept. 15 and Sept. 16 at the Parc 55 Wyndham Hotel in San Francisco. We’ve assembled a who’s who of games in one event that game industry followers won’t want to miss. 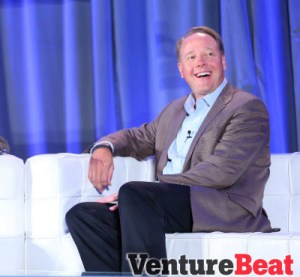 Our aim is to get the movers and shakers together and talking about our theme on “Total World Domination,” or global gaming.

You can check out the full GamesBeat 2014 agenda here. It’s packed with 27 CEOs, 20 fireside chats, seven breakout sessions, and 20 more solo talks that we’ve dubbed GamesBeat University. While the mainstage will have speakers with high-level vision, the university speakers will have tips, tricks, and practical advice for modern game companies. Our moderators are experts, journalists, and analysts who come from Magid Advisors, GTTV, IGN, Reuters, Wedbush Securities, GamesBeat, TechRadar.com, YetiZen, and others.

GamesBeat University’s speakers will deliver practical advice in a parallel track that happens at the same time as the mainstage talks. It includes topics like how to get Apple to love your game, how to get money from a publisher, monetization and user acquisition, and breaking into new markets like virtual reality or China.

Our emcees include Dean Takahashi, the lead writer for GamesBeat; Dan “Shoe” Hsu, the editor-in-chief of GamesBeat; Michael Pachter, the managing director at Wedbush Securities; Japheth Dillman, the co-founder of YetiZen; Jeff Green, a consultant at Hit Detection; Margaret Wallace, the CEO of Playmatics; and Joseph Olin, the CEO of It’s a Secret.

All told, we’ll have 53 sessions this year across the mainstage and GamesBeat University, compared to just 34 sessions last year. I’m really looking forward to our opening talk with Andrew Wilson, the CEO of Electronic Arts, which will be moderated by Mike Vorhaus, the president of Magid Advisors. We’ve got a lot of former Electronic Arts execs following him, like Owen Mahoney, the CEO of Nexon; and John Riccitiello, an investor and advisor and the former CEO of EA.

Some of these companies, like Unity Technologies, might be up for sale. And some of the companies that might want to buy them will also be on our stage. We have tech titans like Google and Amazon, as well as overseas leaders like Tencent and iDreamSky. All of that means that we’re going to live up to our theme of “Total World Domination” — or a global picture of the game industry and the strategies people are pursuing to rule it. 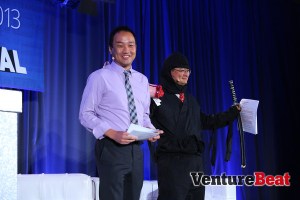 Above: Dan “Shoe” Hsu, the editor-in-chief of GamesBeat, and Dean Takahashi, the lead writer for GamesBeat, opened day two of GamesBeat 2013 with a Halloween theme.

If you’d like to sponsor, please send an email to sales@venturebeat.com.