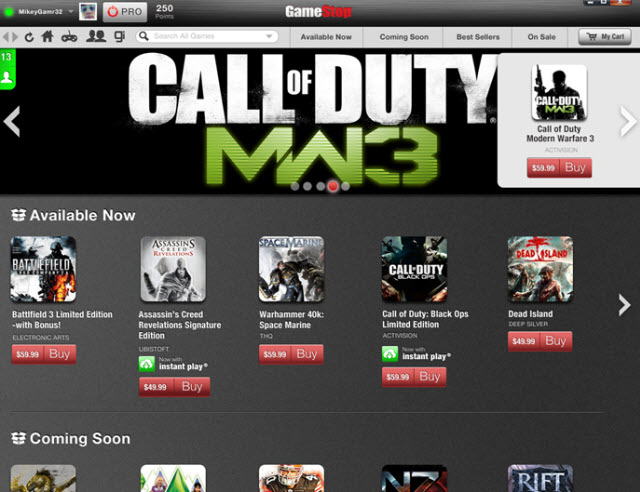 GameStop, the world’s biggest game retailer, announced today it has begun working on a GameStop branded gaming tablet. And last week, the company said it had begun a closed beta test for its cloud-like online gaming and digital download service.

The moves show that the world’s biggest game retailer is getting ready for an era in which digital gaming is just as important as buying packaged disks in retail stores.

GameStop president Tony Bartel told GI.biz that the tablet will use Google’s Android operating system and can come with games preloaded on it. Bartel said that gamers in Dallas, Texas, started using the hardware a couple of weeks ago. GameStop plans to stream games to the new device with the technology it acquired with the purchase of Spawn Labs. GameStop will also release a dedicated controller for the device.

And last week, Bartel said in a speech that the game streaming service is in a closed beta test. With one part of the streaming service (pictured above), you can instantly play demos of games on GameStop’s web site, without downloading anything. If you buy the game, it begins to download to your PC. While you wait, you can continue with the instant-play, and your progress is saved to the final game upon completion of the download. That kind of service is dubbed progressive download. Once the download is complete, the game executes on the user’s own machine.

Bartel talked about the service in a demo at the Cloud Gaming USA conference in San Jose, Calif. It’s a “try before you buy” service where you can see what the game looks and plays like before you buy it. Gamers can play for something like 15 minutes.

By contrast, rivals such as OnLive and Gaikai offer game streaming where the game is executed in servers in web-connected data centers, or the cloud. Video of the game is then sent to users, who can log in from anywhere and play high-end games on low-end computers. Bartel said that you can also use the GameStop service for “streaming to a new screen.”

GameStop picked up its digital distribution technology when it acquired game-streaming service Spawn Labs and online storefront Impulse earlier this year. A full rollout of the GameStop service is not expected until next year.

At Cloud Gaming USA, Bartel said his company is focused primarily on immersive games, not casual or simple games. These games are console-like in quality. The technology is very demanding and latency (interaction speed) is critical. And on average, people play these games for a longer time. In the past, there were significant technological barriers to this kind of immersive game being delivered via the cloud. Those included bandwidth, latency and the ability to scale it to millions of players. There were also costs to adapting games, business model questions, and conflicts with platform companies, Bartel said.

Bartel said that NPD has noted a big gap in awareness and usage on cloud services. Only 22 percent of Americans know what “cloud computing” means. They’re also wary because of scandals like the PlayStation Network outage. IPSOS reported that 40 percent of people do not believe that files stored in the cloud are as secure as private files stored on their own computers.

But gamers do want to try before they buy, try games when they’re thinking about them, and avoid large downloads, according to GameStop’s own research. Bartel said that cloud gaming is a way to enhance the overall consumer experience and is “one of many new gaming options we are pursuing.”

GameStop bought online indie game portal Kongregate, and Bartel said that digital content businesses are on track to generate hundreds of millions of dollars in revenues for GameStop in 2012. That’s still a small percentage of its overall revenue, but it has a very fast growth rate. One of the initiatives producing results on this front is the ability for users to buy digital download content inside stores. Bartel positioned the cloud as a way to extend the console experience, rather than replace it.

You can, for instance, use multiple devices to access your games when you are away from home. As demoed before with the Spawn Labs technology, you can “sling” games. That is, you can log into the Power Up Rewards account on GameStop and play games that you have previously played.

Bartel said the company has the advantage of knowing the playing tastes of 13 million gamers through its rewards program, which tracks 150 million games played by the members. It can thus recommend games that they are more likely to buy.