Winning is always a big deal — but especially when you commemorate it as a star-studded, month-long event in South Korea the way League of Legends did with the 2018 World Championships.

From October 1 to November 3, cities all over South Korea hosted events that drew enormous crowds. The viewers didn’t stop there, however. Hundreds of millions also tuned in via social video, too, as evidenced by the huge uptick in views from League of Legends’ channels. 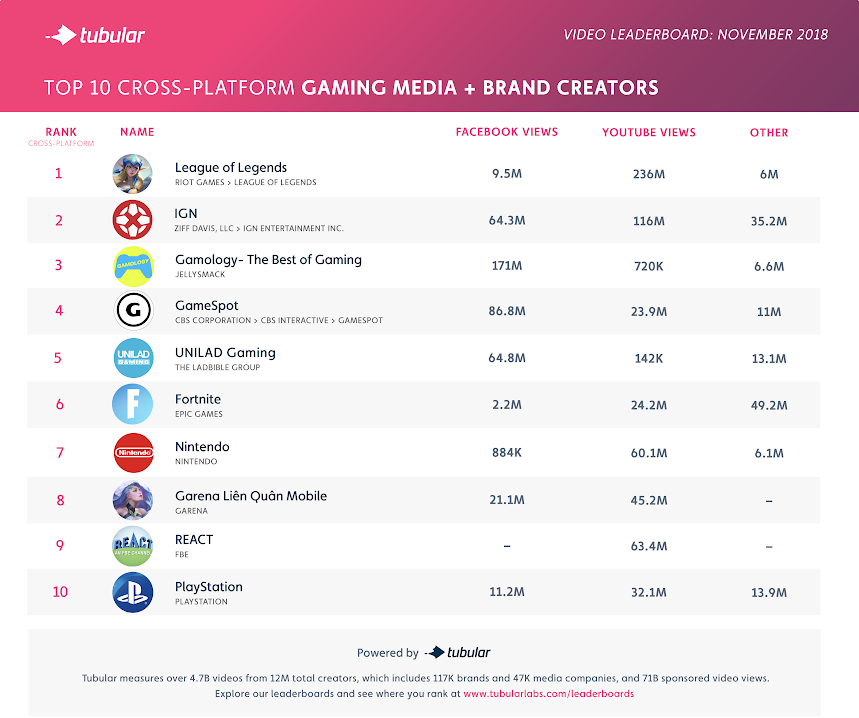 As mentioned, the 2018 World Championships led to League of Legends’ big increase in overall social video views, from a combined 123 million across platforms in October to 252 million in November. That surge was led by K/DA’s “POP/STARS,” a song (and band) created to help promote League of Legends’ new character skin. The group includes real K-pop artists from (G)I-dle, and the YouTube video premiere picked up over 120 million views, with a V3 score (views in the first three days after publishing) of 30.2 million.

The World Championships themselves also received plenty of eyeballs during the month of November. K/DA’s “POP/STARS” performance during the Opening Ceremony generated nearly 16 million views on YouTube, and the behind-the-scenes look at the music video’s choreography had another 6.1 million.

While League of Legends’ creator Riot Games is based in the United States, just 20.3 percent of its social video audience comes from the country. That does still lead the way, however, with Brazil, Germany, Mexico, and Poland rounding out the top five.

Elsewhere, IGN may have fallen from the top spot on the monthly leaderboard, but it didn’t move very far — dropping just one spot to No. 2. The company’s most popular new content for the month revolved around the surprising popularity of the “Detective Pikachu” movie trailer, which earned 11.2 million views on IGN’s Facebook page. Four of the top five videos were about either “Detective Pikachu” or the new Lion King live-action film. The rest of November’s top videos revolved around reviews of some of the holiday season’s top gaming titles like Super Smash Bros. Ultimate, Pokémon: Let’s Go, and Fallout 76, among others.

Gamology — The Best of Gaming and Gamespot fared similarly while finishing third and fourth on the month, respectively. Gamology’s most-viewed new video was its own posting of the “Detective Pikachu” trailer. For Gamespot, content came from videos around titles like Super Smash Bros. Ultimate, League of Legends, Overwatch, and Red Dead Redemption 2.

Fortnite dropped to sixth overall (from third in October) while focusing social videos primarily on new NFL team skins. The Epic Games property continued a strong Instagram push, making for its fifth straight month with at least 20 million views on the platform.

In the push up to and through Black Friday and Cyber Monday, Nintendo and PlayStation were both very busy promoting titles coming out for their popular consoles. Super Smash Bros. Ultimate dropped on December 7 for Nintendo Switch, and the brand was happy to remind fans to get pre-orders in. Seven of Nintendo’s top 15 videos in November were about Super Smash Bros., with the top two accumulating over 3.7 million views a piece.

Fresh off the high of RDR2’s release the previous month, PlayStation leaned on the holiday Playstation Classic release, and its new Astro C40 TR controller for the PS4. The brand also had its busiest month on Instagram since June, with 6.7 million views there (with nearly 60 million total).