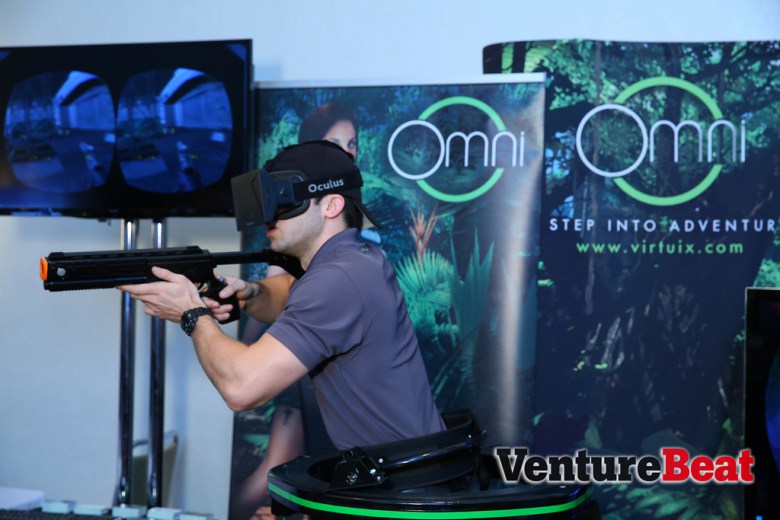 Above: Oculus Rift and Virtuix

GamesBeat: How did you happen to meet the Oculus folks?

Offner: I met Brendon Iribe and tried the Rift shortly after I left Loeb in 2012, when I was between things and trying to figure out what I wanted to do. I started a biz dev consulting firm. It was in November 2012 at a gaming insiders event. I thought, “Wow, this is something.”

I didn’t think of it again until George and I started working together in January. George was like, “Let’s go see Laird Malamed, the COO of Oculus, my friend from Activision. He’s working with Brendon and Palmer Luckey and these guys making VR.” We went down in January and it went from there.

GamesBeat: How did you spend your time at Oculus? What sorts of issues did you have to pay attention to? Were you very preoccupied with things like fundraising?

Offner: We went through a classic cycle. The company had been started using Legal Zoom, and then they had put another structure in place. They were going through vertical growth. The first thing I did in January, February, and March was get the books cleaned up, both legal and accounting and everything else. I did that with Laird.

In March and April, Brendon started bringing in term sheets for the series A. The moment we said, “Okay, we’re properly legally organized and the accounting’s coming along,” he says, “We’re going to do a round, and it’s not going to be $8 million; it’s going to be $16 million.” We closed the round May 29, I believe.

As soon as we got the round closed, we rolled into, “Okay, it’s E3. We have other issues to deal with. We have to do a bunch of deals this summer.” We started working on a Samsung Gear deal back then. Then, lo and behold, it got really busy in August and September, because while people didn’t notice, we were getting ready to do the series B. We rolled into the series B and we closed that before Thanksgiving. We were on a roll.

Then we had to do some platform deals. We had to get the Samsung deal going because we needed to build that relationship for our mobile solution. We had some other major deals we were working on. Then, presto. We closed the B round, the loose ends on that, in January or February. The next thing I knew we were getting ready to sell the company. As soon as we had gotten a task accomplished, we didn’t have very much time to catch our breath. It was, whoosh, vertical growth curve.

GamesBeat: What’s your first thought about advice for companies going through that kind of growth?

Offner: Make sure your legal house is in order. Keep it in order. Brendon and Laird were really smart and supportive of what I wanted to do with outside law firms like Bingham, our corporate counsel. Once we finished the A, we didn’t shut down keeping the due diligence up to date. We kept at it. Take that extra step, if you’re a startup company that’s going through hyper-growth or wants to. Make sure your accounting is really in order, too. Again, Brendon and Laird were good about having good accounting support and a good acting controller.

Work those fundamentals. Take the extra step to make sure you work at clearing out trademark rights and things like your copyright filing. If you do all that and keep it up, when you want to do a major transaction – whether it’s raising $75 million or selling the company for $2 billion – you’re organized and ready to go. That was one reason why we were able to be so successful. The other reasons, more important ones, were the talent of the team and the incredible product they built.

GamesBeat: I assume you can’t talk much about Bethesda, but I would ask if that also took up a lot of your time, the lawsuit.