The PC market has now been in decline for 14 quarters in a row, according to research firm Gartner. The streak, if you will, dates back to the second quarter of 2012. For Q1 2018, Gartner found PC shipments were down globally year-over-year, while IDC reported they were flat. So far, 2018 doesn’t look like it’s going to be much different from past years.

Gartner and IDC analysts have pointed to a variety of factors as contributing to this past quarter’s decline, including component shortages and a rising bill for materials that translates to higher prices. The only consistent factor every quarter, however, is that the PC simply isn’t as in-demand as it once was.

Gartner estimates that worldwide PC shipments fell 1.4 percent to 61.7 million units in Q1 2018. The top six vendors were HP, Lenovo, Dell, Apple, Asus, and Acer. Apple ahead of Asus is a relatively new positioning — Apple only passed Asus in Q4 2017.

As you can see in the chart below, Gartner found that in the top six, only Asus and Acer experienced decreases in PC shipments, but these drops were both larger than competitors’ gains. The rest of the market was actually up 6.6 percent, a rare sight. 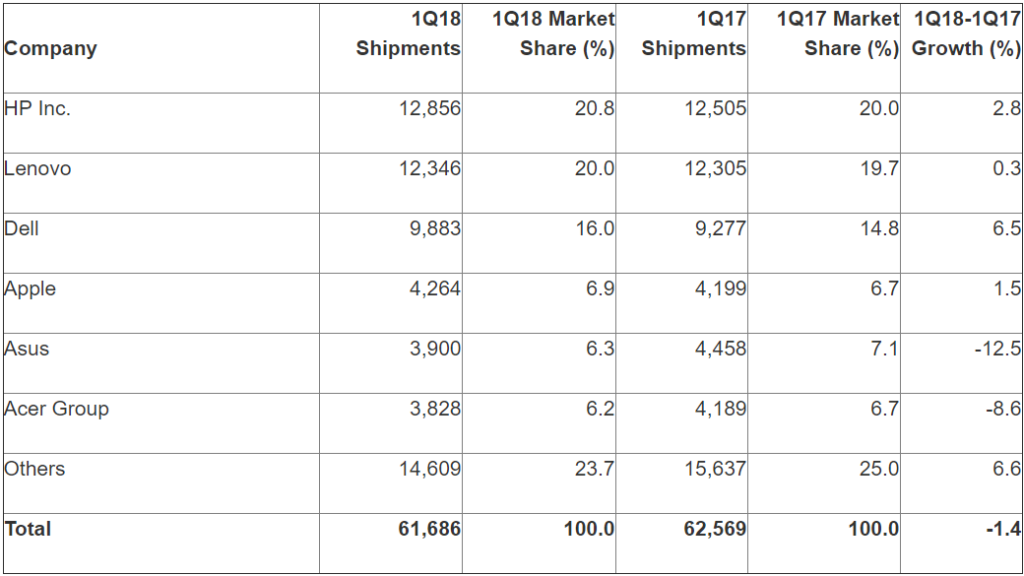 The results show that HP and Lenovo are neck and neck, but there’s more here than meets the eye. HP only took back first place from Lenovo a few quarters ago. But HP has been largely on an upward trend, while Lenovo has been slipping, with more quarters of declining shipments than not over the past couple of years. And Dell grew the fastest, eager to blow past both.

“In the first quarter of 2018, there was some inventory carryover from the fourth quarter of 2017,” Gartner principal analyst Mikako Kitagawa said in a statement. “At the same time, vendors were cautious in overstocking due to the upcoming release of new models in the second quarter of 2018 with Intel’s new eighth-generation core processors.”

IDC estimates worldwide PC shipments were as flat as they could be: 0.0 percent at 60.4 million units in the first quarter. The top five vendors in IDC’s results were HP, Lenovo, Dell, Acer, and Apple. According to IDC, Apple slipped to fifth from fourth place, its position last quarter as well as the same quarter a year ago.

IDC agrees with Gartner that HP was up and that Dell was up more, as well as that Acer was down. But IDC found that Lenovo was flat, and that Apple was down. The remaining smaller companies were also down, which is more believable than Gartner’s findings. The exact numbers, for your perusal:

“The component shortage that initially impacted portions of 2017 led some vendors to stock up inventory to avoid expected component price hikes, and that led to some concerns of excess stock that would be hard to digest in subsequent quarters,” IDC research manager Jay Chou said in a statement. “However, the market is continuing on a resilient path that should see modest commercial momentum through 2020.”