The PC market has now been in decline for five years in a row, per at least one research firm. Not all 20 quarters were in the red, but the most recent nine were. For Q4 2016, both Gartner and IDC found PC shipments were down globally.

Gartner estimates worldwide PC shipments fell 3.7 percent to 72.6 million units in Q4 2016, marking the ninth quarter of PC shipment declines. According to the firm’s numbers, PC shipments have declined annually since 2012. Another perspective: “2016 shipment totals were at the same levels as shipments in 2007.”

In Q4, the top six vendors were Lenovo, HP, Dell, Asus, Apple, and Acer. As you can see in the chart below, Gartner found that only Asus and Acer experienced a decrease in PC shipments. The rest of the market was down 18.8 percent.

For the whole year, the situation looked even more grim. Dell was the only company in the top six that managed to grow its shipments:

IDC agrees with Gartner that Asus was down and that the remaining smaller companies suffered a double-digit drop, but found that Apple was also down slightly. The exact numbers, for your perusal: 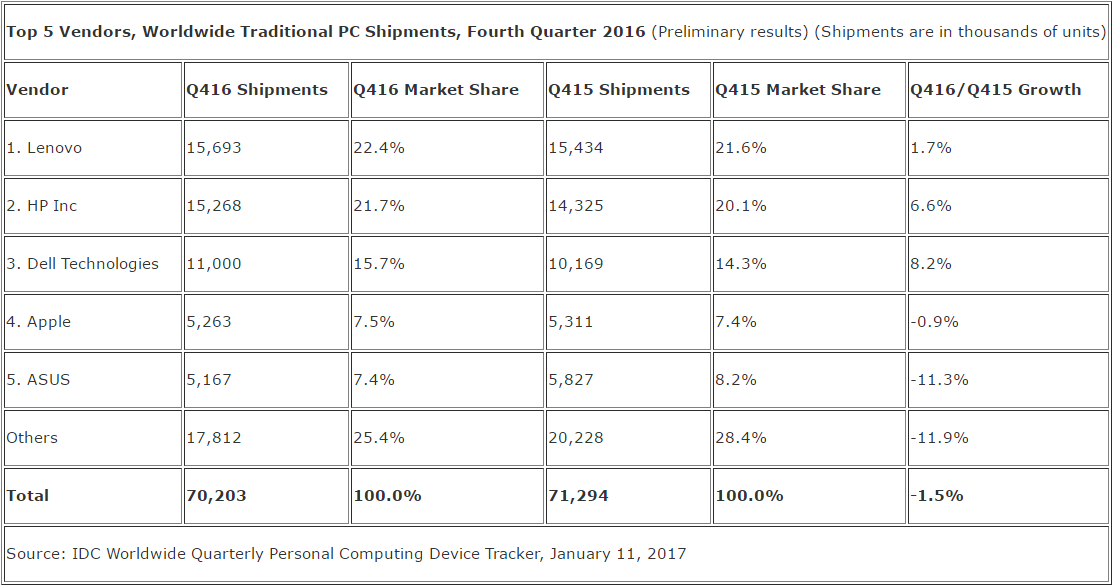 As for the whole year, IDC agrees with Gartner that Dell did well, but also found that HP saw growth: 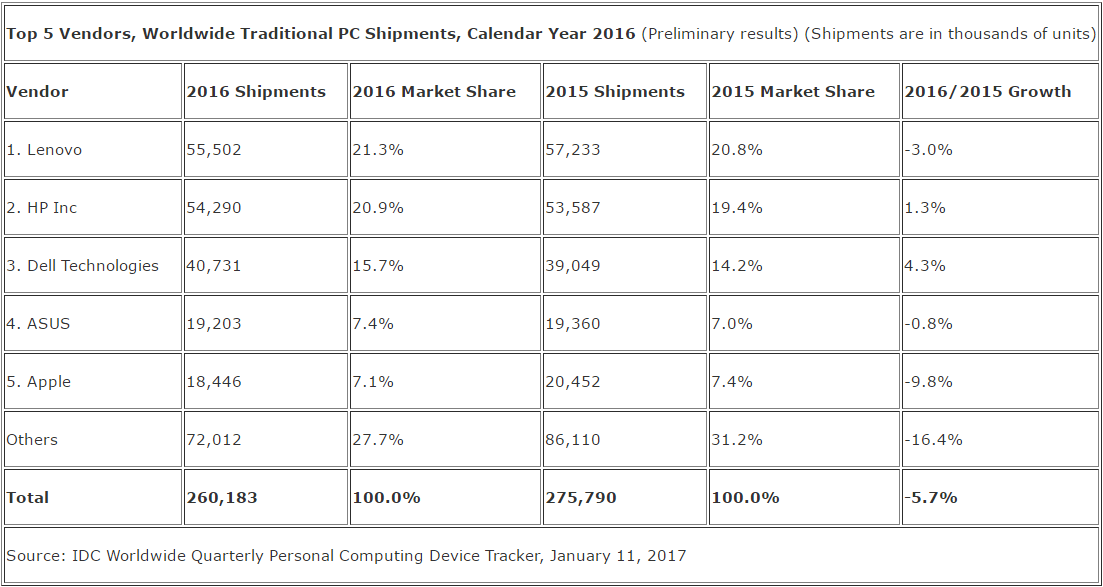 Gartner and IDC analysts have pointed to a variety of factors causing this steady decline, but there’s only one that remains every quarter. The PC simply isn’t in the same demand as it once was.

“Stagnation in the PC market continued into the fourth quarter of 2016 as holiday sales were generally weak due to the fundamental change in PC buying behavior,” Gartner principal analyst Mikako Kitagawa said in a statement. “The broad PC market has been static as technology improvements have not been sufficient to drive real market growth. There have been innovative form factors like 2-in-1s and thin and light notebooks, as well as technology improvements, such as longer battery life. This end of the market has grown fast, led by engaged PC users who put high priority on PCs. However, the market driven by PC enthusiasts is not big enough to drive overall market growth.”

IDC was a little more optimistic.

“The fourth quarter results reinforce our expectations for market stabilization, and even some recovery,” IDC analyst Loren Loverde said in a statement. “The contraction in traditional PC shipments experienced over the past five years finally appears to be giving way as users move to update systems. We have a good opportunity for traditional PC growth in commercial markets, while the consumer segment should also improve as it feels less pressure from slowing phone and tablet markets.”