The PC market has now been in decline for 11 quarters in a row, according to research firm Gartner. For Q2 2017, both Gartner and IDC found PC shipments were down globally.

Gartner estimates worldwide PC shipments fell 4.3 percent to 61.1 million units in Q2 2017. This is the worst quarter in terms of volume since 2007.

In Q2, the top six vendors were HP, Lenovo, Dell, Apple, Asus, and Acer. As you can see in the chart below, Gartner found that in the top six, only HP and Dell experienced an increase in PC shipments. In fact, those two companies have notably achieved five consecutive quarters of year-over-year growth. Asus and Acer were down double digits while the rest of the market was down 7.4 percent.

IDC, meanwhile, estimates worldwide PC shipments were down 3.3 percent to 60.5 million units in the second quarter. The top five vendors in IDC’s results were HP, Lenovo, Dell, Apple, and Asus.

IDC agrees with Gartner that HP and Dell were up, but also found Apple saw gains. The firm found, however, that the remaining smaller companies suffered a double-digit drop (12.2 percent). The exact numbers, for your perusal: 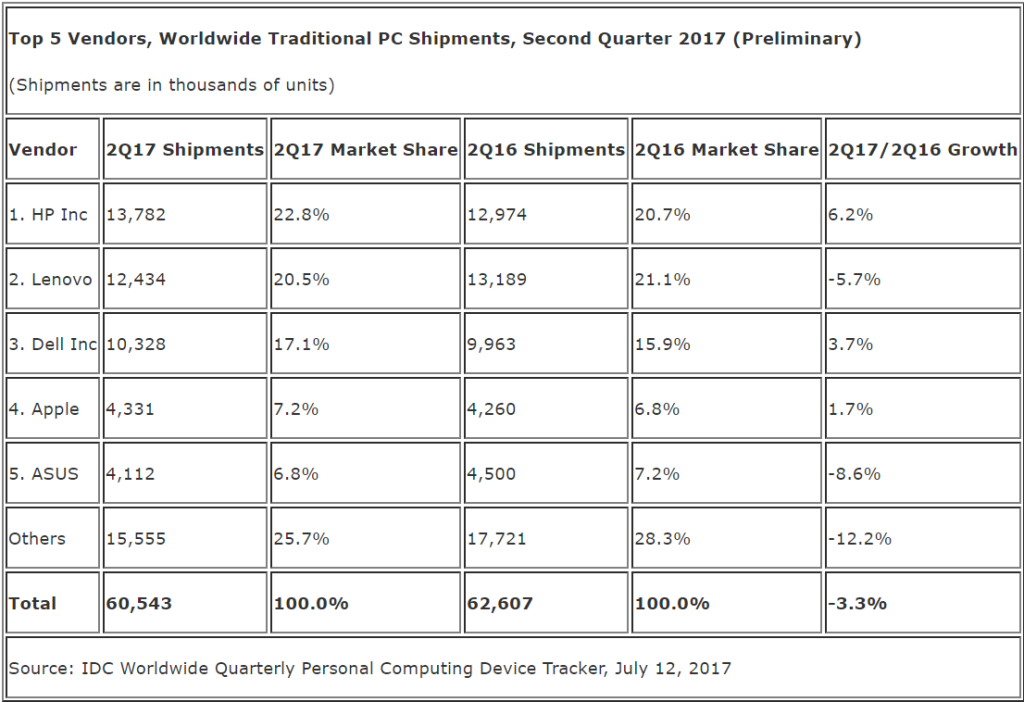 Whereas one factor affecting shipments during the past several quarters was an inventory buildup caused by shortages of key components such as SSD (solid state drive), the second quarter operated under less harsh constraints, though in some instances component shortages still played a role in driving shipment dynamics. Moreover, as expected, the increased bill of materials (BOM) cost due to the shortage also began to impact the final price of systems, which was also factored into IDC’s original assumption of inhibiting shipments.

Gartner and IDC analysts have pointed to a variety of factors of this past quarter’s decline, including component shortages. The only factor that remains every quarter is that the PC simply isn’t as in-demand as it once was.

“Higher PC prices due to the impact of component shortages for DRAM, solid state drives (SSDs) and LCD panels had a pronounced negative impact on PC demand in the second quarter of 2017,” Gartner principal analyst Mikako Kitagawa said in a statement. “The approach to higher component costs varied by vendor. Some decided to absorb the component price hike without raising the final price of their devices, while other vendors transferred the costs to the end-user price. However, in the business segment, vendors could not increase the price too quickly, especially in large enterprises where the price is typically locked in based on the contract, which often run through the quarter or even the year. In the consumer market, the price hike has a greater impact as buying habits are more sensitive to price increases. Many consumers are willing to postpone their purchases until the price pressure eases.”

“Amid some unevenness in market trends across the regions, the global PC market has continued to trend toward stabilization,” IDC research manager Jay Chou said in a statement. “Despite recent issues wrought by component shortages and its effect on system prices, we expect the momentum of commercial market replacements will contribute to eventual market growth. Consumer demand will remain under pressure, although growth in areas like PC gaming and the increasingly attractive portfolio of sleek Windows-based systems will help push the consumer market to stabilize as well.”