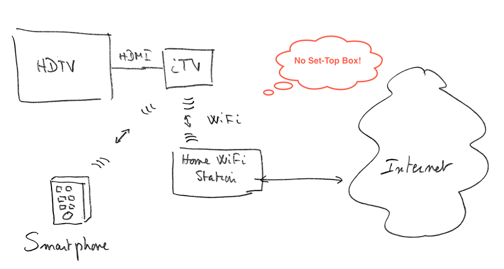 If Apple is planning an interactive television, former Apple executive Jean-Louis Gassée has a pretty good idea of how it will work.

Gassée’s explanation, on his “Monday Notes” blog, takes a little careful reading, but it builds a compelling argument that Apple can — and probably will — make a set-top box, which he calls the iTV, that will cut cable providers out and replace their bundles of channels with apps that you purchase and install.

Gassée starts with the insight that 40 percent or more of smartphone and tablet customers use their devices while plunked down in front of the television. That means there’s an opportunity to use those gadgets as the interface for controlling the TV. Meanwhile, people are fed up with overpriced cable TV packages filled with junk they don’t care about, and they have a proven interest in on-demand video — just look at the success of Netflix and Hulu.

What’s needed is a device to bring it all together. Gassée argues that could be some version of the current Apple TV. Instead of flipping channels, you’d install, say, the “60 Minutes” app on your set top box and iPad. Then you could access the current week’s show, scrub forward and back through it, pull up the entire archive of past shows, and interact with the content in other ways.

Whenever you chose to show a new clip or show, your iPad would send commands over Wi-Fi to the iTV. The iTV would then download your show over the internet and display it on the TV.

“With channels as apps, all you need is a net connection (sometimes provided by the cable operator). You can throw the set-top box away,” Gassée writes.

It’s an interesting hypothesis, and Gassée’s hand-sketched illustrations make it especially clear how an iTV would differ from the current set-top box model.

However, Gassée’s insight into Apple’s actual workings are probably fairly limited: He left the company more than 20 years ago, in 1990, after which he founded Be, Inc. He is now a venture partner at Allegis Capital.

Also of note: Gassée’s not convinced that Apple is going to make an actual television. He thinks the model that it currently uses, of adding a set-top box to your existing TV, is more likely.

Image: Sketch by Jean-Louise Gassée showing how iTV could fit into your TV and Wi-Fi network.