Oh, girl, it’s on! Jason Goldberg is moving in on Scott Gatz’s turf. And Gatz is not taking it lying down. The two openly gay entrepreneurs are both trying to create the hot place for their brethren to check in with each other online.

Goldberg (left, with Fabulis co-founder Bradford Shellhammer), started his company late last year. Headquartered in New York, Fabulis has been in beta for a couple of months with an online people directory for gay men, but it made a glitteringly official debut online in the wee hours of Friday morning. Only a few hours before, Goldberg held a party Thursday evening at a bar in San Francisco — GayCities’ hometown — to celebrate his own launch.

Gatz (right) launched San Francisco-based GayCities in 2008, but recently transformed it from a gay travel directory into a location-based social network. Both startups have raised some money and aim to raise more to create sites focused on social recommendations, a hot area of investment these days.

There’s a real opportunity in assembling a gay audience online. Marketers have long known there’s money to be made selling to gay audiences. Estimates for just the gay travel market in the U.S., a natural source of advertising dollars, range from $47.3 billion to $70 billion a year. And the market’s total spending power may be as high as $700 billion a year.

Take those new location and social networking technologies, mix in mobile devices making it easy for people to find each other, and you’ve got a fizzy cocktail for investors.

Goldberg, a serial entrepreneur best known for starting online-recruiting site Jobster and SocialMedian, a social news aggregator, told me he wants to build a site that’s about “celebrating life,” not hooking up. Sites like Yelp and TripAdvisor, he said, don’t offer the “gay take” on venues, and broad social networks like Facebook don’t match the way gay men socialize.

Meanwhile, gay “friend”-finding sites like Grindr and Manhunt are pretty transparently about sex — a turnoff for gay men who are just looking to socialize, not get laid. (It’s perhaps noteworthy that both Goldberg and Gatz are in committed, long-term relationships, a fact that may have shaped the products they built.)

Online gay websites — especially ones that aren’t geared around sex — have struggled. PlanetOut, the highest-profile gay media startup to date, went public in 2004 but made ill-advised acquisitions and was merged into Here Media, a gay-themed TV and movie distributor, last year for a pittance.

Here Media recently shuttered PlanetOut.com, one of the oldest gay websites on the Internet, redirecting it to Gay.com, a site best known for personal ads. And Gatz noted that many traditional gay print publications have gone out of business in the past 12 months.

“We’re all part of the new wave,” said Gatz, a former Yahoo executive. “We know advertisers are interested in reaching this audience, we know this audience is looking for solutions. It’s nice after this period of darkness to have some light shining.”

Fabulis and GayCities haven’t gotten much buzz outside the gay press. They’ve been steadily raising their profiles: GayCities launched an iPhone app that lets users check in to specific locations last month, while Goldberg was recently photographed for Out magazine — “I’m the hot technology guy,” Goldberg explained wryly — and has publicly feuded with the likes of Citibank and Amtrak over bizarrely retro incidents of apparent corporate homophobia.

What Fabulis is launching today is a directory of events and the people planning to attend them, cleverly built on top of Facebook. While most developers use the social network’s Facebook Connect tools simply to identify users and provide a convenient login, Fabulis’s development team, based in Pune, India, have created a layer on top of Facebook’s events directory, allowing users to say things they might not mention on Facebook — like that they’re planning to attend a party wearing eyeliner. (You go, whoever clicks that button.) And it’s easy to imagine that some users might RSVP to a dance party on Fabulis but not want to announce their plans to all their Facebook friends. 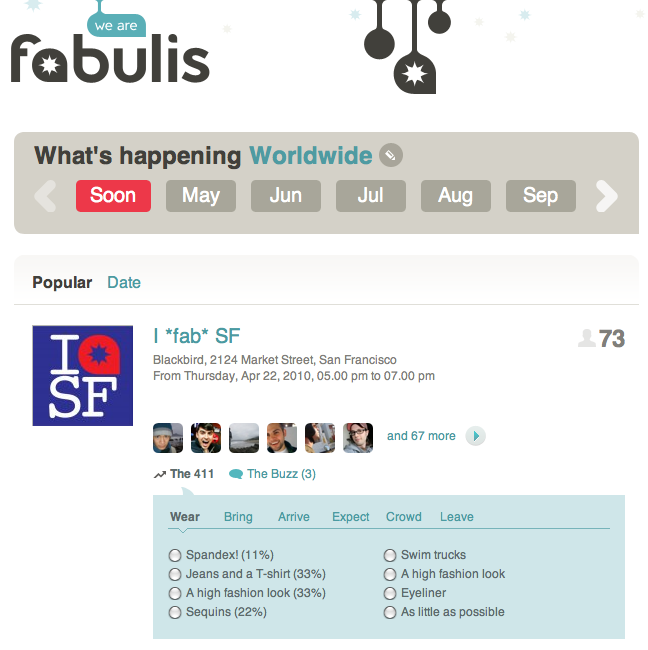 Fabulis also awards users “bits,” a form of virtual currency, for performing various actions on the site, like nominating friends as “fabulis” and getting them to join the site. Goldberg anticipates eventually charging for bits as well.

So how is GayCities responding? Gatz told me that he found Fabulis’s appearance on the scene energizing. He noted that GayCities has more users than Fabulis (a claim Goldberg contests, though his site currently only has 15,000 users registered through its beta phase). According to the site’s Google Analytics stats, GayCities has 385,000 monthly unique visitors and more than 2 million pageviews a month. Gatz said the GayCities iPhone app has 175,000 users. 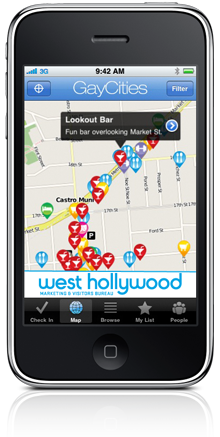 GayCities clearly has an edge over Fabulis in location-based services and international reach. Services like Foursquare and Gowalla have popularized the notion of using a mobile device to announce one’s presence at a restaurant, bar, or other venue. Pairing that notion with a gay-themed social network creates a sort of instant gaydar for gay men looking to socialize with other gay men. Gatz has hired go-go dancers to do guerrilla marketing in gay bars, offering to buy customers drinks if they use the GayCities iPhone app to check in. And it has a carefully edited travel directory as a starting point for listing venues.

“We’ve had people check in 121 cities in all six continents — everywhere but Antarctica,” said Gatz. “We’ve had someone open our iPhone app in Baghdad.”

Goldberg said that an iPhone app and check-ins are on Fabulis’s development roadmap. And he dismissed GayCities’ travel directory as full of “bars and bathhouses” — an emphasis on sex that he said is what he hopes to avoid with Fabulis.

Gatz said that was a “misconception” and that GayCities lists all kinds of places, from hotels, gyms, art exhibits, and organizations like gay sports leagues.

What’s next for the two companies? Goldberg, who raised $625,000 in convertible debt from the Washington Post Company, Mayfield Fund partner Allen Morgan, and others, said he expects to raise a Series A later this year. (Morgan, whom Goldberg calls his “big straight daddy,” funded PlanetOut at Mayfield and served on its board. He did not respond to requests for comment on the launch of Fabulis and the shutdown of PlanetOut.com.)

Gatz has bootstrapped GayCities himself and is currently raising an angel round.

It could be a great catfight between two highly ambitious entrepreneurs. But would it make more sense to join forces and tackle the big gay market together? We hear that Gatz and Goldberg had lunch on Thursday while Goldberg was in town. In the business world, at least, gay marriage is perfectly legal.