General Electric has a vision for a future that is automated, data-driven, and run by smart machines.

GE has attached itself to all the major buzzwords of late, with its executives speaking to the press about the power of “big data,” and the Internet of Things. This buildup is part of its billion-dollar investment in the Industrial Internet, which is bringing analytics and intelligence to the physical world of industry.

GE published a report today on the The Industrial Internet@Work, which makes some sweeping predictions about how the rise of Internet-connected machines will impact society.

The report, written by GE’s chief economist, Marco Annunziata, and its director of global strategy and analytics, Peter C. Evans, found that companies lose money due to inefficiencies in how information is gathered, stored, and shared.

The enemy to productivity is “unplanned downtime.” The authors argue that maintenance crews won’t have to work according to a rigid time schedule and incur unnecessary downtime. Instead, they can respond when they’re needed to the real-time data coming out of connected machines.

“We are giving industrial sectors the ability to be more efficient,” said GE’s vice president of software and analytics William Ruh, in an interview with VentureBeat. “We’re giving them the models the consumer Internet has had for a decade.”

The report delves into four massive industries: aviation, railways, power, and health care. It provides some concrete use cases for how work processes will change in the future.

Ruh tells me that GE is now “all about services” — this kind of speak has prompted analysts to suggest that the company has reinvented itself as a software firm. In addition, GE invested over $100 million into Pivotal, a new spinout company run by former executives from storage and infrastructure giants VMware and EMC.

It’s highly strategic for GE to delve into software and services. It’s an approach taken by most of the largest and most established players in the industry, including IBM and Dell.

GE currently operates around 250,000 turbines, locomotives, medical equipment, and other machines installed globally. These machines are generating terabytes of data that can be analyzed to improve efficiency and reduce costs.

“We see in the industrial sector that there are a whole series of applications that can be configured to operate big machines and plants and fleets,” said Ruh. 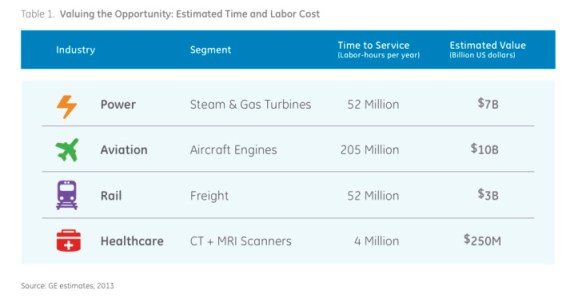 Will the Industrial Internet create jobs?

Technology advances are often seen as a threat to workers — we often hear that machines will replace human workers.

The GE report, however, stipulates that the Industrial Internet will lead to new employment opportunities. GE predicts that employers will be looking to hire data scientists, digital-mechanical engineers, and user interface experts.

The report also stipulates that the average worker will become far more digitally savvy. A wind turbine worker, for instance, will show up for work with a wireless device that indicates exactly which turbine needs to be fixed. That same device is equipped with video conferencing technology, so that worker can communicate with the central operations center and tap the expertise of his or her peers.

According to the report, employers will foot the cost of this technical training and purchase new devices for their workers. The authors also indicate that education will need to improve, but it doesn’t delve further into how we’ll transform our schools and universities.

“We argue that the transformation of work associated with the Industrial Internet is better characterized as a race with the new intelligent machines, not against them,” the authors wrote.

Want to learn more about the Industrial Internet? Check out the full report here.