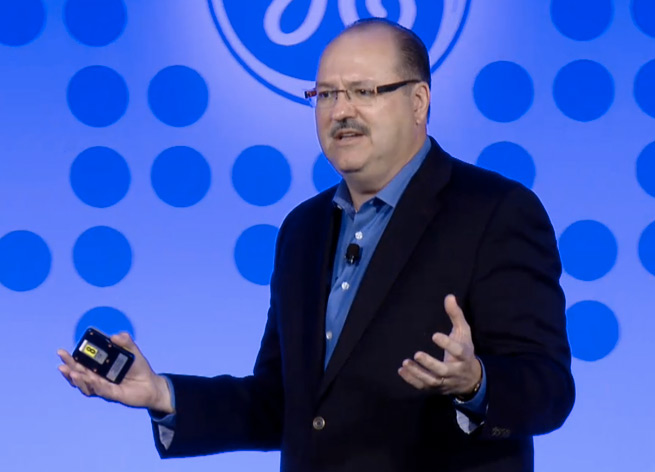 Offering a “big data” solution is apparently irresistible to every company on the planet. Megacorporation General Electric has just announced a new big-data and analytics platform it calls “Predictivity” so it too can join the number-crunching party.

Unlike many other big-data solutions, GE’s new Hadoop-based software is targeted at the “industrial Internet.” Companies in industries like aviation, health care, energy, transportation, and manufacturing all can benefit from real-time insight and analytics, and GE thinks it is the right company to deliver that since it already has such deep ties with those industries.

GE’s vice president of the Global Software Center, Bill Ruh (pictured above), called the new offerings a major step toward “a new era of computing.”

“GE’s industrial-strength platform is the first viable step to not only the next era of industrial productivity but the next era of computing,” Ruh said in a statement. “The ability to bring machines to life with powerful software and sensors is a big advancement — but it is only in the ability to quickly analyze, understand, and put machine-based data to work in real time that points us to a society that benefits from the promise of big data.”

To add to the announcement, GE also firmed up partnerships with Pivotal, Amazon, and Accenture that will help them fulfill some of the promise of this software.

The EMC-backed Pivotal partnership might be the biggest of the three. Pivotal is the recent high-profile spin-off of EMC and VMware that got $105 million in funding from GE in late April. The two companies are intertwining in a meaningful way, and so they will work together on these big data solutions. Specifically, Pivotal will use its Cloud Foundry platform and Hadoop-based tech to support GE.

“Pivotal and GE share a vision for a common platform that is cloud-agnostic and based on modern scale-out technologies — and does it all at speeds faster than what was previously possible,” Pivotal chief executive officer Paul Maritz said in a statement.

Amazon Web Services and Accenture will give GE additional support. Amazon will be the first cloud provider on which GE will deploy its “industrial Internet platform.” Accenture and GE say they will jointly develop new tech and analytics apps that leverage big data.