The Internet of Things is making everyday objects smarter and connected. So why not a garbage can?

GeniCan is launching its smart garbage can device at CES 2017, the big tech trade show in Las Vegas this week. Part of the smart home, the GeniCan attaches to most garbage cans and recycling bins so that you can easily update your grocery list. Once you’ve thrown something out, the odds are good you’ll want a replacement. Clearly, the Internet of Things means that just about everything is going to be connected, sensored, and smart.

Through a partnership with Amazon’s Dash Replenishment Service, GeniCan can also automatically order popular items, like diapers, paper towels, and snacks, once they have been thrown away or recycled. When you run out of a product, you can scan the item before throwing it away to quickly add it to a grocery list. Items without a bar code can also be effortlessly added by holding the item in front of GeniCan for a couple of seconds and using voice recognition technology to instruct the device.

GeniCan leverages sensors to detect and scan items, which are then added to the app through a connection to the home’s Wi-Fi. To avoid accidentally adding products, GeniCan is calibrated to only add items that have been intentionally scanned or added via voice recognition. If an item is simply tossed into the garbage can, it will not be added to the list. 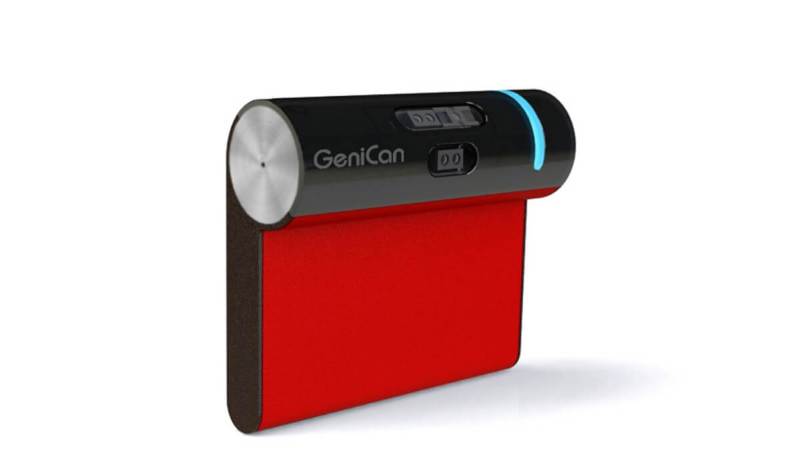 GeniCan ensures users have their grocery list with them any time they head to the store and makes it easy for the entire family to participate in generating and updating the list. The accompanying GeniCan app stores the grocery list, which can be shared across devices, so the entire family can view it anytime, anywhere. The list can also be manually updated within the app, which includes a bar code scanner and the same voice recognition technology as the device itself.

“I was on a work conference call when my wife called and asked me to text her a photo of the grocery list. How often do we go to the store without a list and end up buying things we don’t need, or worse, forgetting to buy essentials?” said GeniCan cofounder and inventor Rob Griffin, in a statement. “I knew there had to be a better way than scribbling on a piece of paper, or using an app that you never update and can’t share with the family. That’s why I invented GeniCan.”

GeniCan is hands-free, allowing users to update the grocery list the moment they are thinking about what they need, even if their hands are dirty or full. The device ships with four Duracell AA batteries that will last a year between replacements. It is compatible with all major platforms, including Apple and Android, with future plans to include Windows phones.

“We’re thrilled to offer a solution to a pain point most families and households are confronted with,” said Dave Pestka, cofounder, in a statement. “In addition to saving users time, GeniCan has the added benefit of saving them money, since shopping with a list and sticking to it is proven to help save money at the store, while reducing the number of trips. Our partnership with Amazon also provides an alternative option for time-crunched families, allowing them to have essentials delivered and skip the trip to the store altogether.”

GeniCan is now available for preorder and will be available for demos at CES 2017. Griffin and Pestka started the company in 2014.