Touting its special focus on the San Francisco Bay Area, new portal GenieTown is launching today with a listing service that might be helpful the next time you need a cabinet maker, gutter cleaner or wedding photographer.

Like the Yellow Pages or Yelp, GenieTown is primarily a list of different service providers, with ratings from customers. However, it’s added another feature: the ability for people in need of a service to post projects for contractors to bid on. That part of the business model is similar to Elance or Guru, two services that list projects for professionals to bid on.

The online market for freelance professionals — for example, software coders or technical writers — is, in fact, already pretty well developed. What GenieTown hopes to do is open up a market for blue-collar and technical workers, who have continued to rely on the local phone book for their business. 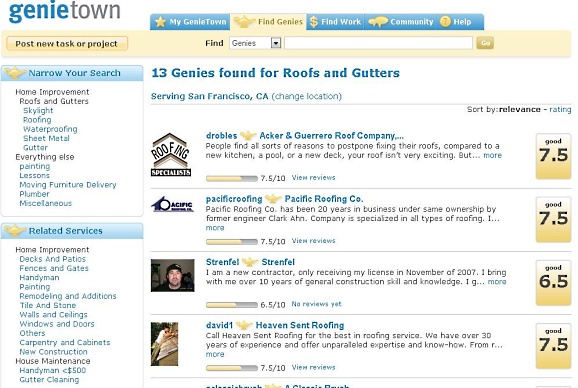 It’s a good idea, from a consumer standpoint. When my house flooded during a recent downpour, it wasn’t easy to figure out exactly what kind of plumber or technician to call. Granted, there also wasn’t time to sit around and wait for bids to roll in for a project (stop the damned leaks!), but it’s easy to imagine a scenario where it would have been useful — like the ensuing cleanup.

And from a pricing standpoint, if GenieTown is successful, it might shake up entrenched businesses. Just as Guru has dropped the pricing floor on many writing projects, GenieTown could help drop the cost of services well known for their expense — again, plumbing is a good example.

In the short-term, though, GenieTown is unlikely to spread outside of a few cities that are large enough to have the Internet-savvy workforce needed to support it, as it plans to try to do in a few months. There are also some real-world complications. Few good contractors want to bid on a project before seeing the site in person; the system could also encourage unskilled workers who hurt the bidding process by consistently underbidding skilled shops.

In the meantime, check out the video below, from GenieTown’s community site, where experts can share their tips. Believe me, it’s worth paying attention to those small leaks.