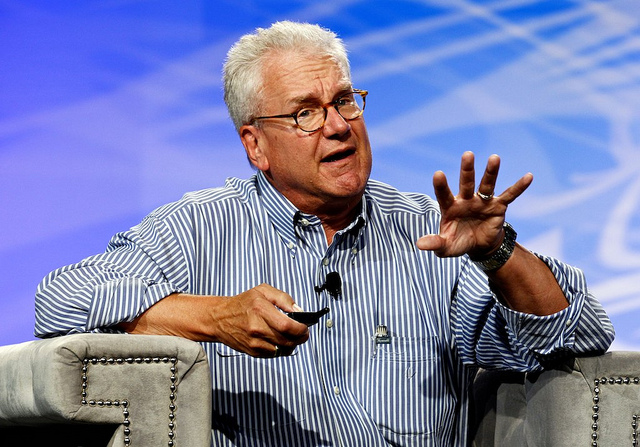 Updated: We’ve added Moore’s slide deck from his presentation below.

For business book author Geoffrey Moore, learning how to succeed in the increasingly fast-paced tech business is a competitive as well as a national imperative.

“We don’t have as much competitive advantage as a nation as we used to, so we’ve got to keep our team on the field,” said Moore.

Moore is the author of the bestselling Silicon Valley bible Crossing the Chasm. He’s also the managing director of TCG Advisors and a partner at Mohr Davidow Ventures. Suffice it to say that his words carry a lot of weight among the digerati, from entrepreneurs to venture capitalists. He appeared onstage today at Demo Fall 2011 in Silicon Valley. (We’ll post a video of his conversation with VentureBeat editor-in-chief Matt Marshall shortly.)

His new book is Escape Velocity: Free Your Company’s Future from the Pull of the Past. Unlike his earlier book, which was published in 1990 and is aimed at early-stage companies, this book is meant more for mature companies facing a changing consumer and internet-driven environment. In the book, Moore analyzes what he says are five different types of power that companies have and use, based on their category dominance, competitive advantage, engagement with customers, great product offers or great execution.

But it was his views on various tech giants that made his analytic vision clearest.

Moore said that HP hived off its PC business because it can’t fight a war on two fronts: enterprise and consumer tech. It’s bad enough having to fight IBM and Oracle without also having a separate fight against Microsoft and Apple. In that sense, the company’s decision makes sense, even though it’s giving up a dominant share of the PC market to do it.

“You are either a complex systems company or you’re a volume operations company. It’s either fish or fowl.” The reason HP survived so long on both the enterprise and consumer fronts is that it was supported by fat margins from its printer ink business.

“I find it hard to fault HP because, I’m sorry, if you’re playing against Steve Jobs, you’re going to lose. He’s the Bobby Fisher of this generation,” Moore said.

Apple is an example of a company that utilizes “offer power” — the attractiveness of its product offers — better than almost anyone else, according to Moore.

There were MP3 players before the iPod, but Jobs was able to change the category by creating a sufficiently attractive new offer in the iPod. (In other words, the product was so much better than what competitors offered that it was compelling to customers and overwhelmed the competition.) Apple repeated the trick with the iPhone, which gave it enough leverage to negotiate a very favorable deal with AT&T, and again with the iPad, which now accounts for the vast majority of the tablet market.

“Steve is kind of a miraculous guy,” Moore said. “There’s no one else that I can think of who’s been able to create offer power as effectively.”

Moore also offered his perspective on the challenges and opportunities facing Yahoo, Google and Intel.

Why the new book?

“I’ve spent most of my life dining out on Crossing the Chasm, and the dinners were good,” Moore said. But that book was focused primarily on business-to-business opportunities, not business-to-consumer, volume operations companies, like many of the big internet companies today.

In this environment, Moore said, it doesn’t make sense to pick a single market segment and dominate it while you attempt to cross the “chasm” to critical mass and revenues.

Instead, he proposed several metrics that are important: acquisition rates, customer engagement, virtality, your ability to monetize, churn, lifestime customer value, and how productive your marketing and promotional activities are.

“You can’t do this linearly,” Moore said. “You’ve got to get the wheels spinning all at once.”

Moore was skeptical about one of the currently most-hyped consumer internet companies, Groupon, which is heading towards a likely IPO. “It’s a $600 million revenue company losing $300 million. Which means you too can sell dollar bills for 67 cents at high volume.”

While initially skeptical of Twitter, Moore’s been impressed with Twitter of late. “People have a lot of use for 140 characters in real time. I think it’s got real legs,” Moore said.

On Facebook, he was even more optimistic, citing the company’s high customer lifetime value.

“It has become the Kodak of this century, because you used to keep your photographs in a box, and now you keep them on Facebook. So families will live on Facebook until there’s something else,” Moore said.