Combining satellite imagery with maps and other data has become very fertile ground lately, illustrated by two recent products from Geosemble and Google.

First, Google just introduced a way for you to edit the location of your (or others’) houses and businesses in Google Maps (image below). 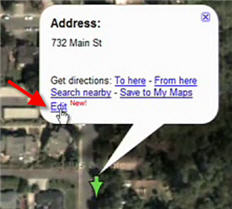 Enter Geosemble, which offers a separate product: It lets you import large amounts of data — using for example an Excel sheet with all of your clients addresses — to map out the physical location of each address within a visual map created using satellite images.

You can import anything from telephone directories to publicly available tax data to lists of news articles about a city. Geosemble can provide you exact physical information, such as the size of a swimming pool or an open area of somebody’s yard. You can search for locations based on zip code, city, county, the property value of people’s homes and other information from within the site.

To start using the service, you’ll need to contact the company here.

It’s not hard to think of uses for Geosemble. Example: A company that builds offices for people’s home could take publicly available databases of people who have incorporated sole proprietorship businesses, and then locate on a satellite map which of them have space for an office addition. Such targeting would be more efficient than scanning publicly available online maps, poring over your own Excel sheets, and going door-to-door to figure out potential customers.

Of course, Google Maps For Enterprise also lets businesses overlay their own data on top of its maps. Like Geosemble, that service costs money. Geosemble is competing to process more data and provide more precise results faster and more cheaply than Google or any other mapping company.

Geosemble has its government allies: Together with the University of Southern California engineering school, it has continued to receive grants from various agencies.

In August, DARPA awarded Geosemble and USC a grant to develop a way to link online news articles, videos and audio data with maps so you can see news items for any satellite image coordinates in the world. The Department of Homeland Security, meanwhile, funded a related project where Geosemble and USC will summarize local information and display it in compact labels and captions. The US Air Force Office of Scientific Research has provided money to basically duplicate Google Maps’ own overlay of map data and satellite images. The National Science Foundation has also awarded Geosemble a small-business grant, to help Geosemble build out the commercial services mentioned earlier.

Geosemble is a partially-owned subsidary of Fetch Technologies, a data services company that also grew out of collaborations between USC researchers and the government.

Meanwhile, below is a Flash demo of how Google’s new maps “edit” tool works (RSS readers will have to visit site).