With the Crunchies just a couple of weeks away, we’ve covered most the contenders on this site, with a few exceptions. One is Earthmine, a nominee in the Best Technology Innovation/Achievement category.

The company is building a geospatial platform that will integrate with web applications to give them access to a database of in-depth 3D data on a selection of major metropolitan areas. The product is expected to target government agencies, builders, and others involved in urban planning. A beta of the product is set for release in February. 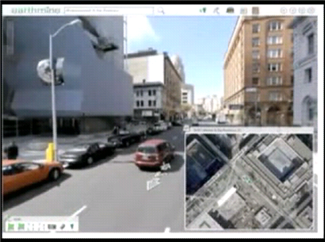 The Berkeley-based company has some tough competition. Google has already released StreetView with the help of a satellite partnership with NASA, while Microsoft had gained early ground and attention with its Virtual Earth program.

However, Earthmine says it’s inked an exclusive agreement with the California Institute of Technology (Caltech),  trading an equity stake in Earthmine for an exclusive license to NASA’s Jet Propulsion Laboratory (JPL) software–the same software used on the Mars Exploration Rover Missions–which stands to give the company a significant technological advantage over the competition.

Earthmine’s competitors have not been without partnership, but it remains to be seen how they’ll be able to match this kind of technology. We’re trying to contact Caltech to find out just how exclusive this exclusive agreement is likely to remain, but haven’t heard back yet.

The first version of Earthmine’s product, demoed here, has very easy to use point, click, and go browsing capabilites, while Google StreetView and other competitive products (see below) only allow zooming because their environments are based primarily on video and satellite imaging. In addition, Earthmine cleverly combines Google Maps’ renowned bird’s eye view as a browser-in-browser feature (like the picture-in-picture option many people use on TV to watch sporting events), so while immersed in the 3D world, the minimized browser (with the bird’s eye view) shows and allows quick access for movement in the 3D map.

As the demo shows, the measurement tool can measure varying objects such as the width and height of a window, the breadth of a street, or the height of a tall building.

Co-founders John Ristevski and Anthony Fassero envision an accurate 3D model of the real world where the user has tools to interact with the mapped city (San Francisco is currently the only city available, but the company plans to have the top 50 U.S. cities mapped in the next few years). Construction companies, city government offices, and other users can point and click for accurate real-world measurements, create tags to mark points of interest, and capture and export screen shots.

The company, which has raised $1.2 million through family and friends, uses “reality indexing” software to create a geospatial data mine of urban environments using three-dimensional, high resolution panoramic images collected from their SUV-mounted camera setup. The technology Earthmine licensed from Caltech uses algorithms to extrapolate data from these wide-angle stereo cameras.

Earthmine is still looking for additional capital, and it remains to be seen how they’ll generate revenue. Fassero suggests they’ll offer an API on their software platform and allow city governments to integrate their geographical systems and databases with Earthmine.

Earthmine is one of the latest geospatial players to hit the scene. Several other mapping companies we covered in the past have been quicker to the punch, including Upnext, which has already released Facebook applications featuring its rendering technology (and received equal praise and heat from TechCrunch ), and Geosemble, which lets clients import data such as addresses to map out physical locations. One competitor, Everyscape, has already launched in seven U.S. cities, from Boston, MA all the way to sunny Laguna Beach, CA.

So the race is on to see who can quickly map the most cities and monetize their product.