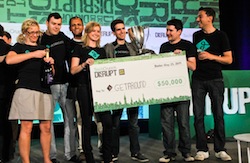 Getaround, the startup that offers a marketplace for personal car rentals, was named the winner of TechCrunch Disrupt NYC.

The company bested 32 other competing startups, including runners-up Billguard and Sonar, to win  $50,000 and a ton of valuable media exposure. But judges were not the only ones who thought Getaround was a great idea, as the company was also voted the Audience Choice winner.

Getaround offers a marketplace where people can rent their car to others and/or rent one themselves. Car owners set the rental availability while Getaround handles things like insurance, 24-hour roadside assistance, searching for available vehicles and such.

Although the company has been public less than a week, 1,600 cars are signed up for the service, according to Getaround’s founder. For some perspective, that’s about 20 percent of similar car sharing service Zipcar’s 8,000 fleet of vehicles.

As noted in our past coverage, the service also has plenty of advantages over the competition. Rental prices, which are set by the car owners, are generally cheaper than Zipcar or traditional car rental companies. Getaround also doesn’t have the problem with expanding like Zipcar does, since it doesn’t have to worry about deploying and maintaining a fleet of cars. It’s also just as useful in less densely populated areas as it is in cities.

RelayRides, another car-sharing startup in Boston, offers a very similar service, but at this point it seems like Getaround is pushing to build a more social marketplace.