GetJar is raising $11 million in a second round of funding from Accel Partners as it continues to expand its mobile app store.

The company doesn’t have a lot of brand recognition. But it operates the second-largest mobile app store, behind Apple’s App Store. It has surpassed 1 billion in downloads. For perspective, Apple has had more than 5 billion downloads. But GetJar’s app store works across hundreds of cell phones. 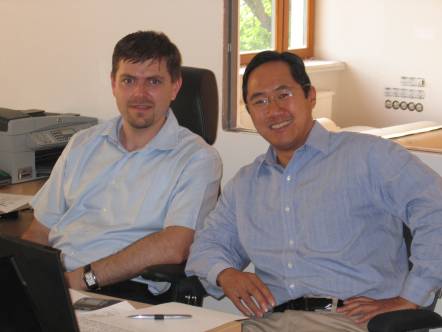 GetJar was founded in Vilnius, Lithuania,  in 2004 by CEO Ilja Laurs (at left in photo, with Accel Partners’ Rich Wong). The company promotes its app store as an open platform that caters to a number of smartphones, including those based on the Android, BlackBerry or Symbian operating systems. In the past year, GetJar has tripled its number of employees, quadrupled its downloads per month, signed partnerships with Sprint and others and maintained profitability.

Accel Partners funded GetJar’s $6 million Series A in 2007. Now, Accel is the sole participant in this next round. “We doubled down in this Series B due to GetJar’s momentum as the leading open platform in the mobile apps space,” said Wong. “Mobile app developers need to get discovered, build a marketing channel for mobile users, and scale to massive user bases.”

Laurs said the new funding would be instrumental in getting the company to the next level in its global expansion. If GetJar can hold its position, good things will happen. Juniper research forecasts that the global app market will be worth $30 billion by 2015. Right now, GetJar has more than 65,000 apps and customers in 200 countries.