Ghostbusters World is the latest game to try to get you hooked on playing anywhere in the world. It’s an augmented reality game, like Pokémon Go and Jurassic Park: Alive, where you can use your smartphone to see animated ghosts in the real world.

The free-to-play game from Sony Pictures Consumer Products, Ghost Corps, 4:33, and Next Age is the latest to take advantage of Google’s mapping technology, the Google Maps applications programming interface (API). It is coming out later this year, but I got a good look at it on an Android-based Google Pixel 2 smartphone. It has more of a hardcore gaming flavor to it than other games, but it only offers incremental innovation on top of the likes of Pokémon Go. If you really love Ghostbusters, then this might be for you. But otherwise, it’s one of many titles that will be using Google’s mapping technology.

The single-player game uses augmented reality battle mechanics that are particularly well suited to the Ghostbusters. In the films, Ghostbusters seek out ghosts in the real world. And the same thing happens in this game, where you can walk down the street and come across a ghost. You battle the ghost using your weapons, and once you’ve weakened it with your proton gun’s beams, you can capture the ghost in a trap.

David Kim of Sony Pictures said in an interview with GamesBeat that the game play is simple. 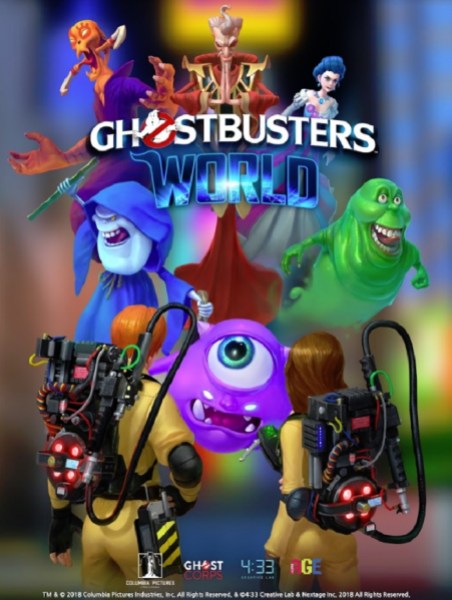 “You just tap on a ghost that you want to attack, and the battle begins,” he said.

It was a little complicated to create a raid battle, with four players attacking a boss. I had to create a room and invite the nearby players.

Several friends can join you in taking down bosses, and four of us gave that a try. A Stay Puft Marshmallow Man spawned on us, and we attacked it with everything we had. When the puffy guy raised his hand, a circle appeared on it, and we had to shoot it to prevent an attack. It took a lot of work from three players (as many as four can join) taking on the Marshmallow Man, but we did it. I had a couple of different weapons, including one that was like a shotgun and another like an electric shock. All the while, the happy Ghostbusters soundtrack plays. It got a little harder when one of our players got knocked out.

In story mode, you can pursue an adventure. The story comes from Erik Burnham, author of the Ghostbusters comic books. The art and look of the characters is based on how they look in the comics. But the ghosts come from all parts of the franchise, including films, TV shows, comics, theme parks, and video games. There are hundreds of different ghosts that will be sprinkled through the world. 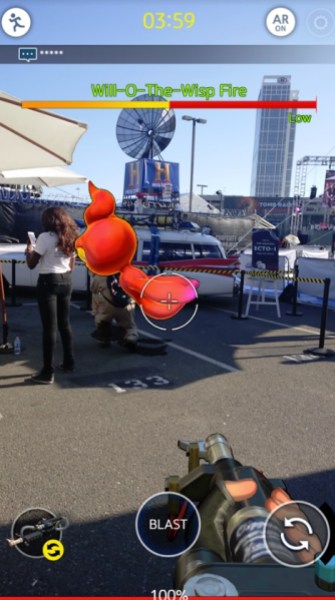 Above: What is this ghost looking at?

You won’t have to pay in order to enjoy the game, but you can make purchases with real money for optional perks. Ghostbusters World uses Google’s ARCore and Apple’s ARKit to bring. The title will open for pre-registration this fall, and is aiming to launch in the fourth quarter of this year. Kim said the game will soft launch in a few countries this week.

You can actually play a lot of the game without moving around much. But there are Dimension Doors interspersed throughout the world where ghosts gather. You can go to those locations and collect resources that will help you bust ghosts.

You can also capture ghosts and use them to play asynchronous player-versus-player (PvP) battles with other players. And you’ll be able to personalize your avatar’s appearance, costume, and proton pack with items and gear.