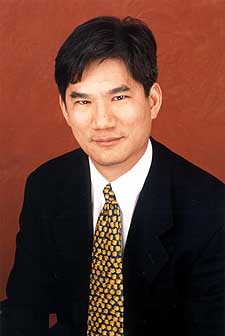 When times get bad, it pays to have a sense of humor.

That’s a hallmark of Gilman Louie, a celebrated video game geek and seasoned venture capitalist. He was chief executive of MicroProse, a seminal simulation game company that made flight simulations such as the Falcon series. He was also more recently the founder of In-Q-Tel, the Central Intelligence Agency’s venture capital arm in Silicon Valley. While at In-Q-Tel, he did 61 deals. He used to get nutty pitches from people who said they could communicate telepathically. One of his colleagues took such a call and said, “I’m going to hang up now and you can beam the idea to my head.”

Now he’s a partner with Stewart Alsop in the Alsop Louie venture capital fund. He spoke recently at the Bay Area Capital Connections III conference at the Computer History Museum in Mountain View, Calif. The audience was full of young entrepreneurs, ready to absorb Louie’s wisdom. These are the highlights of his talk.

Riffing off of Guy Kawasaki’s “The Top 10 Lies of Venture Capitalists,” Louie said that venture capitalists are “professional liars.” He said that resorting to lies is one way VCs deal with the flood of ideas that they have to screen in order to find good investments (more on these lies in a second). In spite of the gloom, he said that today remains the best time to start a company.

Louie said he was excited about the potential of life sciences investments, which promise the ability to “live forever,” as well as the growth of information systems where “Google is the tip of the iceberg.” Joking that “everything good starts with Star Trek,” he said the communicators that Captain Kirk used are now in use everyday among BlackBerry owners. And he said he was aware of a “nano material” company that could make “cloaking” (making an object invisible) possible. He said it could soon be possible to “print physical goods” on a desktop printer, enabling users to micro-fabricate one item at a time as desired.

He said that venture capitalists are who 20-year-olds go to when they can’t get money from a bank. But he noted that venture-backed companies account for 9.1 percent of all U.S. jobs, or 10.4 million. They account for 8.6 percent of all U.S. sales, or $2.3 trillion. In the last four quarters, he said VCs had invested $30.8 billion in 4,000 companies. Silicon Valley accounts for 40 percent of that. Because of new engines of growth such as cleantech, Louie said that Silicon Valley is cushioned against the recession.

He noted that Silicon Valley survived the last recession and that the rate of new ideas progresses independent of the state of financial markets.

“In the last three years, people rushed to monetize the web,” he said. “A lot of them wanted to make a quick buck. But you make real money by building real companies.”

He pointed to the “R.I.P.: Good Times” presentation circulated by Sequoia Capital and said that it brought up the old saw: when you’re being chased by a bear, you don’t have to outrun the bear. You just have to outrun your friends. He said that startups have to be sure that they’re in the top 10 percent of a VC’s portfolio so that they can get all of the attention and cash during tough times.

Then Louie put on his skeptic’s hat and told the audience about the “great lies of venture capitalists.” The lies are as follows:

1. “You have a great idea and I’m happy to give you money once you get traction.” Louie said, “That’s just to get you out of the door. But if you have traction before you show up, your company is worth a lot more.”

2. “You can never take too much money. Take as much as you can. Why? That’s when it’s cheap. I get more percentage of your company when you take more cash from me.” He added, “In reality, you should ask for as a little money as you need to get by. Your most precious asset is your ownership of the company. We love it in a meltdown because we can stick it to you.”

3. “Valuations aren’t what they used to be.”

4. “Ask a professional CEO to run the company.” He added, “Most of us entrepreneurs would say, ‘Hell no!’ You don’t need a Wall Street reject to come run your company. Beware of venture funds who move quickly to replace entrepreneurs. Do your homework on who will make a lot of money with you. Look for those who want you to be their partner.”

5. “My associate is a star. I’ll punt the deal to the associate.” Louie said, “Every general partner in a VC firm keeps the great deals to himself or herself.”

Then Louie expounded on the reasons why it’s a great time to start a company.

1. “The companies that build value can survive the dark days. Your rivals will evaporate in a tough economy.”

2. VCs will often take your idea and give it to another entrepreneur if they can’t do a deal with you. This results in a lot of copycat companies. But that won’t happen in a down economy as often because the VCs can’t afford to start as many me-too companies.

3. “Building a startup is not affected by current economic times. You’re going to launch but not for 24 months at the earliest. You can launch your product as the economy is recovering.”

4. It’s a great time to steal talent. “If those Sequoia-backed companies are laying off people, they can work over at ours.”

5. “You have to have the confidence to know you are great.” He noted that his partner, Stewart Alsop, often asks trick questions of entrepreneurs, such as, “What happens if you don’t get funded?” If the entrepreneur says they will do another idea, that’s the wrong answer. The VC wants to know if you will do it anyway because you’re passionate about the idea, rain or shine.

Louie noted that he is not looking for ideas with high probabilities of success because they’re probably obvious ideas that others will copy. He laughed at how the founders of Federal Express were so down on their luck that they went to Las Vegas to gamble and raise money to meet payroll.

He said that venture capital is an expensive form of capital and that you should raise it only if you really need it.

“Don’t raise VC money to show your friends that you can do it,” he said. “For those who get money, the most important thing is to spend time with VCs to get their experience and wisdom. They can recognize patterns of stupidity and patterns of genius.”

Lastly, Louie said, “Don’t be afraid. This is the time to choose your dreams.”