The Girls in Tech Catalyst conference featured speakers who want to inspire women to excel in technology jobs. The speakers at Catalyst ranged from Poppy Northcutt, the first woman to be part of NASA’s Mission Control in Houston, to Danielle Feinberg, technical director at Pixar.

Adriana Gascoigne, CEO of Girls in Tech and author of the new book Tech Boss Lady, said that 47% of the workforce is female, but women are only 25% of the information technology workforce. Gascoigne formed the group a dozen years ago to empower the next generation of tech leaders.

She said that without diversity in the workforce, there’s a measurable impact on recruitment, retention, innovation, and company culture. But even so, women lag behind men in compensation, opportunity for innovation, work-life balance, and ongoing learning. So Girls in Tech offers boot camps, mentorship, Hacking for Humanity and Amplify events, and coding training.

Rather than focus on horror stories about abuse or sexual harassment related to the #MeToo movement, the speakers focused on overcoming challenges for women in the workplace. 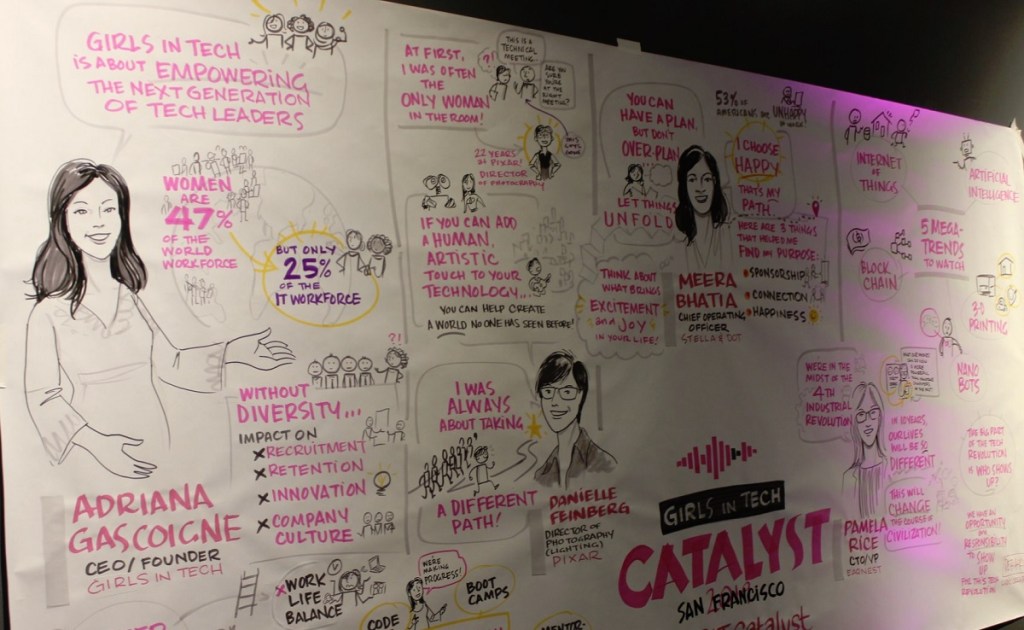 Some of the women speaking were pioneers. Northcutt, a former TRW engineer and contractor, was the first female to work as an engineer at NASA’s Mission Control center in Houston. More than 50 years ago, ahead of the Apollo 8 launch, she was the only woman in a “room full of nerdy white men” in white T-shirts.

She was trained in math, but there was no advice, no how-to book, no conferences for her to attend. She said that while males were called engineers, she was called a compute-tress. After working many years as an engineer, Northcutt said she became a “flaming radical women’s rights activist.” She also advised women to be out in the open, and not be “hidden figures.” When she became the first woman at Mission Control, the whole world noticed. 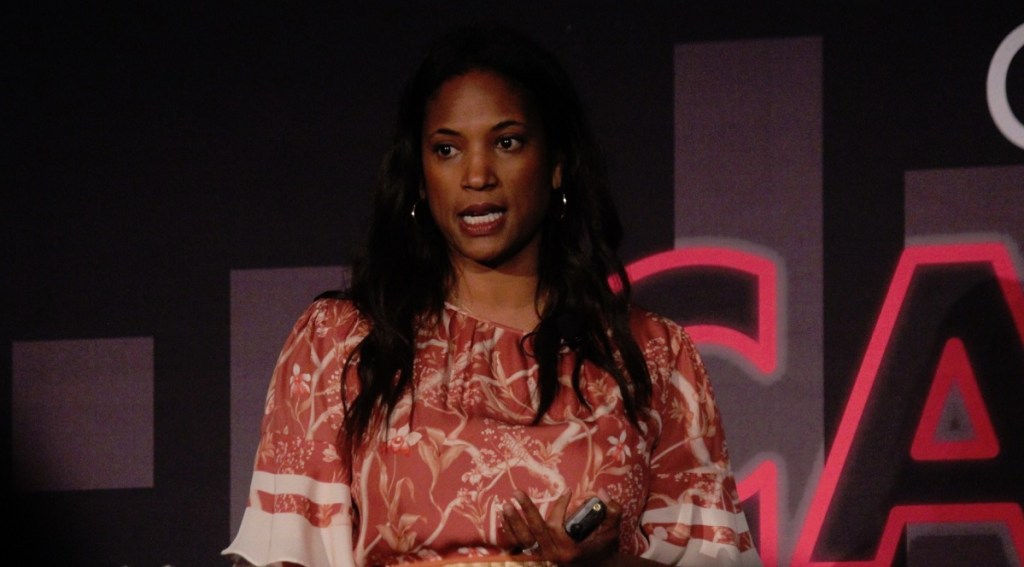 Above: Summer Simmons is director of product creative at Netflix.

In a more modern company, Summer Simmons talked about her role as director of product creative at Netflix. She said the company believes in the power of story to connect people, and that successful entertainment is all about helping people see themselves in Netflix’s stories. That’s why it’s important for Netflix’s workforce to use their diverse perspectives to move the business forward.

“My journey as a leader is about making room and finding room” for other voices at the table, Simmons said.

Asked about Netflix’s reputation for being ultra-competitive, she said, “I don’t wait for someone to make room. I claim it for myself.” 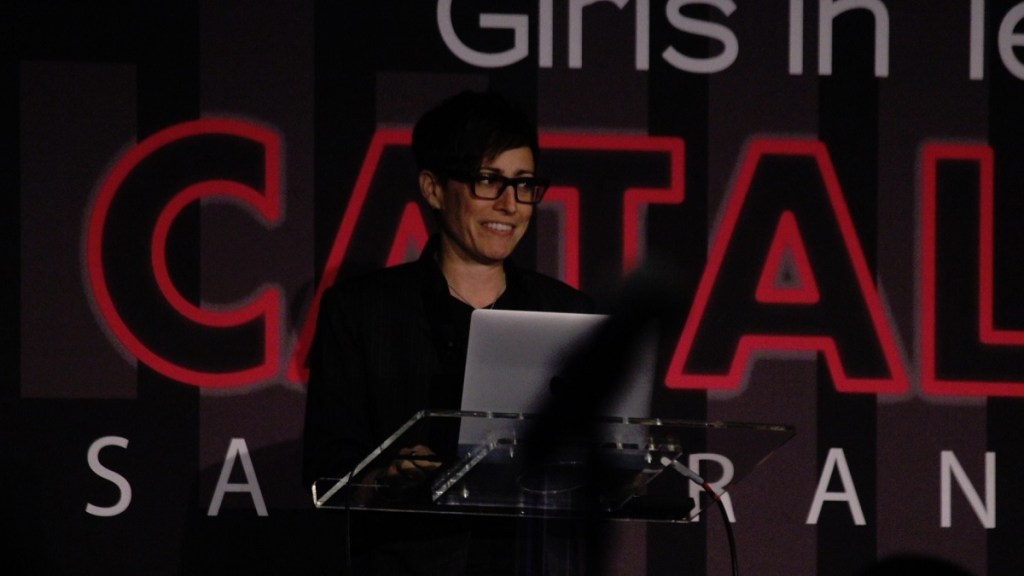 Feinberg, who has a degree in computer science from Harvard University, said she was crestfallen when she showed up at a meeting and a male coworker asked why she had come because it was a “technical meeting.” Now that person is no longer there, and she was recently promoted to supervising technical director, which is a rare position for a woman.

But she has spent 22 years at Pixar, most recently as director of photography. She talked about creating “awe” with beautiful world shots in Coco and putting human emotion into Wall-E’s eyes that defied real-world physics. Had they not made Wall-E more human, he would have looked lifeless and glassy.

Likewise, her team had some interesting discussions when the director of The Incredibles told them that the character Violet had to have long hair. In those days, hair was an unsolved problem. The physics of how it moves and reflects light is a difficult computing problem. But the team pulled it off, and Violet was able to hide behind her hair due to her shyness. By taking a different path, Feinberg said the team can solve problems and benefit from diversity and create a “world that no one has seen before.” 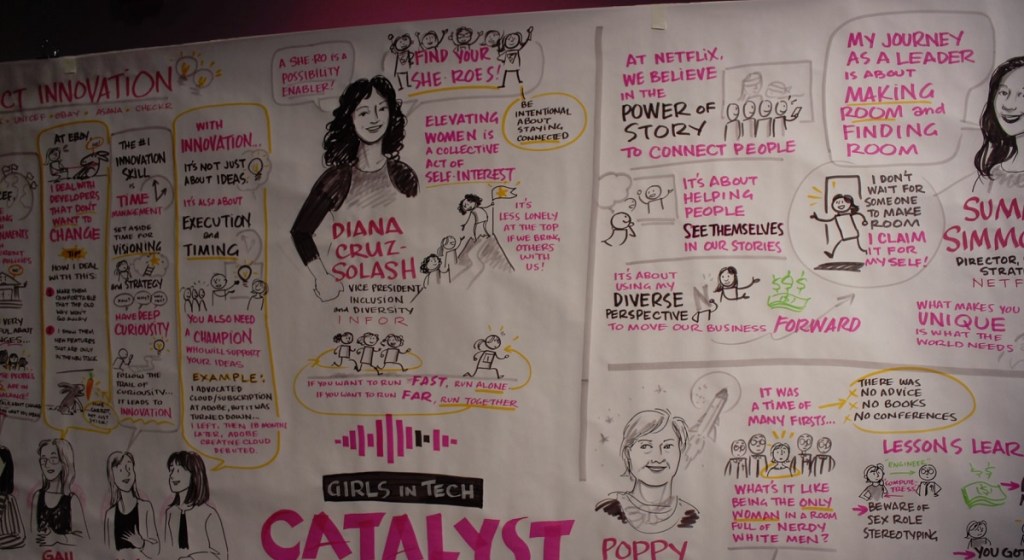 Above: Catalyst day one summary

Meera Bhatia, chief operating officer of Stella & Dot, said that sponsorship is critical for women. It’s as important as making connections and being happy in your work. In this case, sponsorship means finding someone who will make it their job to see that you are successful. That shifts some of the responsibility for success to others, but it makes sense in large workplaces where individual effort can go unnoticed.

She noted that 53% of Americans are unhappy at work, and women should think about what brings them joy in the workplace. 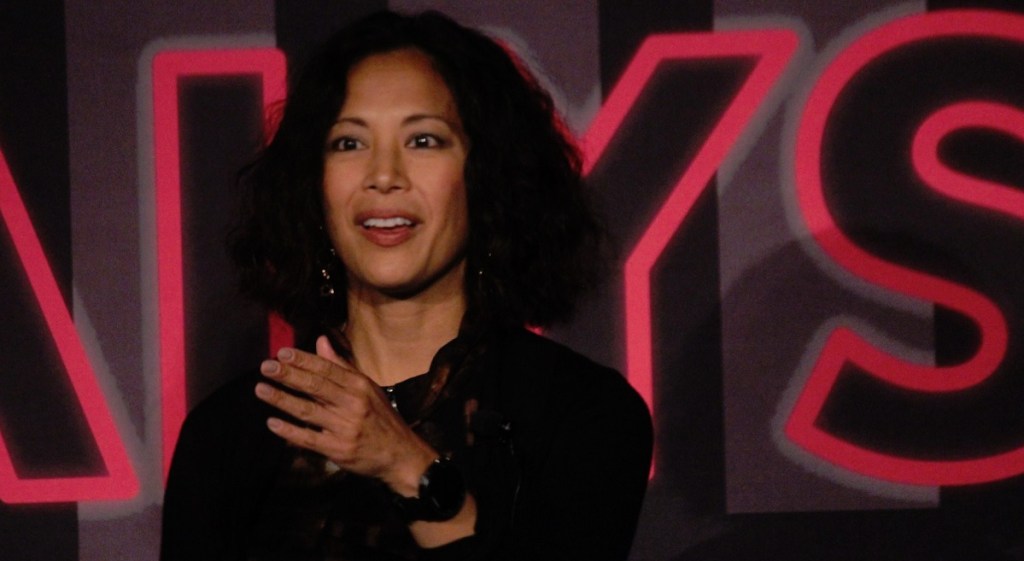 Above: Diana Cruz-Solash, vice president for inclusion and diversity at Infor.

Diana Cruz-Solash, vice president of inclusion and diversity at business software maker Infor, suggested that women find their “sheroes,” a group of women who actively try to help each other as mentors and advisers.

“It’s less lonely at the top if we bring others with us,” she said.

I introduced my college-student daughter to her, and she said that it was never too early to start creating your “sheroes.” And she said you can create multiple groups over time and have different people rotate through those groups, as needed. 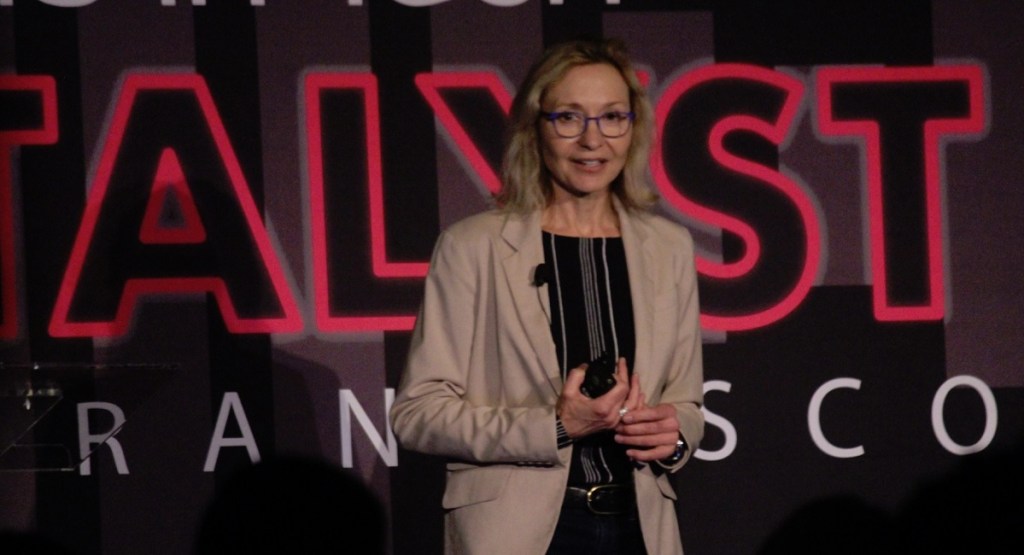 Above: Pamela Rice, CTO of Earnest, talked at Catalyst about tech megatrends.

Pamela Rice, chief technology officer of Earnest, pointed out five major megatrends that will bring about a tech revolution and blur the lines between the physical, digital, and biological worlds. She said people should be aware of trends like artificial intelligence and 3D printing and take advantage of the opportunities. Rice also said there is an opportunity, because of the #MeToo movement, for change to happen with regard to women’s roles. She said that women have a responsibility to “show up” for this revolution.

I found the first day to be very inspirational, as I have for the past few years. But it was fun to go with my daughter for the first time, as she saw some very practical ideas for how the event — and networking among women — could help her. She took most of these photos.