The past couple of weeks have been a study in contrasts for Adriana Gascoigne, CEO and founder of Girls in Tech, the women and girls advocacy group with 60,000 members in 60 chapters in 36 countries. Gascoigne pulled off a successful Catalyst Conference celebrating women in technology in San Francisco. And then she looked at the horrifying stories about the sexual harassment of women in Silicon Valley in the New York Times.

The men and women in those stories were her peers from a decade of advocating the cause of women in tech. She felt those horror stories were such a setback that she wrote an open letter entitled, “What we can do about sexual harassment in Silicon Valley.”

She wrote, “I’m appalled and shaken by allegations in Katie Benner’s NYT piece that point to several prominent men in the VC space who have harassed women entrepreneurs. As someone who has experienced sexual harassment herself — it’s rampant in the tech community — I’m outraged that some people in our community think it’s okay to be so blatantly inappropriate in their encounters with women with whom they have a business relationship.”

I interviewed Gascoigne about her open letter, and it brought up her own wounds of being harassed by male colleagues in the past. But she also raised the silver lining of an opportunity to change the way business is run in Silicon Valley and talked about how the women who came forward can now receive support from a much broader group of people who believe in the cause of equality.

“It’s traumatizing. It’s almost reliving what I went through several years ago,” Gascoigne said in our interview. “I didn’t have the courage to speak up or confront the people who were causing those issues in my workplace. I applaud the women who came forward and went into detail about what had happened, what their experiences were, how it made them feel.” 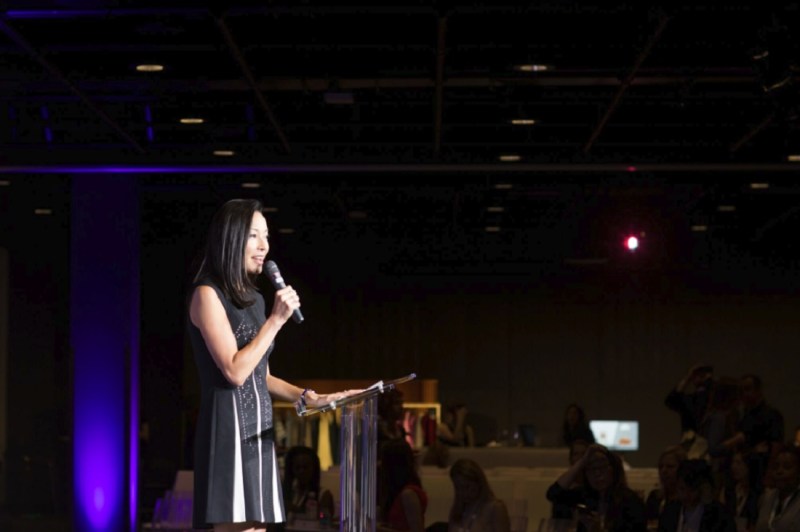 Above: Adriana Gascoigne addresses the Catalyst Conference in San Francisco.

Adriana Gascoigne: We’re not talking under the best of circumstances, given the news and everything that’s going on with the investigation. But the silver lining is that things are getting done. That’s positive. But it’s hard to digest learning about so many things. I knew it existed. I knew it was bad. But I didn’t realize it was this bad.

VentureBeat: You wrote the open letter this week. It seemed like this news hit you fairly hard, that the New York Times uncovered so much sexual harassment going on in Silicon Valley.

Gascoigne: Yeah, to say the least. It’s traumatizing. It’s almost reliving what I went through several years ago. I didn’t have to courage to speak up or confront the people who were causing those issues in my workplace. I applaud the women who came forward and went into detail about what had happened, what their experiences were, how it made them feel.

It’s a huge risk that they’re taking. I feel that they don’t necessarily know what will happen after they divulge this information. So many different things could happen. They don’t want to be seen as the tattle tales or the whiners. It’s very sensitive. It’s a tightrope type of thing that they had to experience. But I’m so glad that they came forward.

Like I say, it’s a silver lining that this is all bubbling up. Companies are going to be more accountable. Their HR divisions are going to be more accountable when it comes to protecting their employees through specific policies that protect women and minority groups, training programs for management, clauses and agreements in employee contracts, VC partner agreements. Things that underscore that good behavior is a positive, and bad behavior could not only hurt employees, but tarnish the brand of the company, the interaction with their portfolio, the success of their portfolio.

There are so many things that can be affected as a result of something like this happening that, at the time, people don’t realize the repercussions — how it can affect a person in their life, or a whole community. 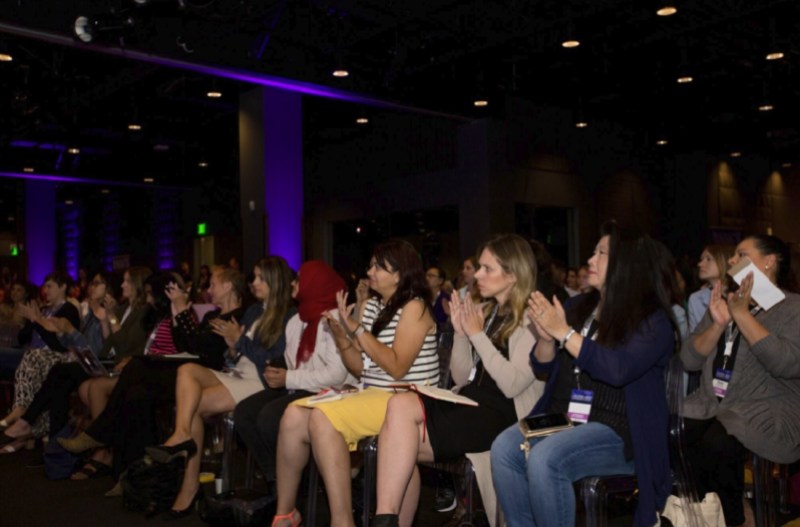 Above: 1,000 people attended the Catalyst Conference in San Francisco.

VB: You came forward in some ways. You didn’t name names, but you did talk about the harassment publicly. Can you talk about the kind of reaction that generates, and what these women could expect now that they have come forward?

Gascoigne: The open letter, on the whole, was extremely positive. People realized that having a voice and sharing your opinion and helping build a platform where women can have a support network, feel safe and secure, and share the issues that they’re encountering in the workplace, that’s important. It’s something that Girls in Tech will provide.

The open letter was mainly to share my point of view, because I was getting approached by a lot of reporters to speak to what was happening in Silicon Valley. While I wish I could talk to everyone, there’s just one of me. I decided it was time to make a statement that put our stake in the ground and expressed what I feel personally, given that I was sexually harassed three times in my career. Listening to all of the discussions that are going on, the investigations, the articles reporting on it, and distilling that down to solutions. What can we do as a tech community? What can VCs do? What can companies do to protect their employees and start changing the culture that’s so delicate, but so important, especially in the early stages?

We have to take accountability for creating change in policy and training programs, making sure that cultures are focused on employee happiness and productivity. People that cause issues, that are behaving badly, need to know that there are repercussions.

As to what people can expect, now that things have bubbled up to the surface — the women specifically who have come forward, they’re getting applause from everyone. They’re getting a lot of support from a lot of organizations, and obviously the media. I think companies as well. But especially the women in tech community, where they’re serving as the front line, so to speak, of women who have come forward experiencing things. They’re very courageous to take that risk and share their personal stories, the tribulations of their day-to-day work, whether it was at a startup or as an entrepreneur looking for funding and pitching VCs.

I’ve heard these stories many times. Sometimes it’s just on a high level, but going into detail — there’s some gross, gross things that have happened, discussions that have occurred, actions, assaults. I feel that these women are going to get a lot of support. They’re getting a lot of applause and praise from the women in tech community, from groups like Girls in Tech, and also from a lot of tech executives and startup executives who I think really believe in diversity and inclusion, and that leveling the playing field, creating an environment based on gender parity, is crucial to the positive existence of a healthy tech ecosystem.

Only then can we create products and services, software and hardware, in Silicon Valley that are comprehensive. A culture that can support a level playing field and enable people of different backgrounds, different races, different genders, people of different experiences can be creative problem solvers, creative innovators. They should be focused on the task at hand, without having to get help with what they’re dealing with in the workplace. Are people talking about me behind my back? What are these weird emails about? Am I being isolated in the board room? All of these things go through our minds if statements are made – are we isolated are alienated? There’s a lot of unconscious bias. Some of it’s latent sexual harassment. Some of it’s open assault. Some of it’s impostor syndrome, something we put on ourselves. 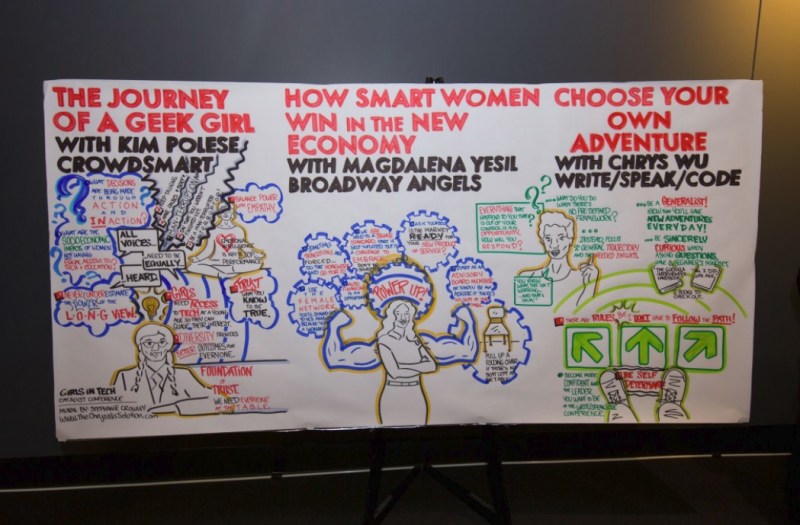 Above: An artist summarized talks at the Catalyst Conference.

VB: I noticed in your letter that you tend to go back and forth between frustration and trying to find a positive route out of this. Just on frustration, it seems like there are a lot of expressions that can be frustrating. Some people don’t believe this can be happening in 2017, or that this is some kind of witch hunt against men. What you can say about where you’re at as far as some of your reaction to the reactions?

Gascoigne: I’m extremely frustrated. I’ve been doing this for 10 years. Just when I think we’re making progress, this happens. It’s not just one or two cases, but several. It’s a lot bigger than I thought it was. I’m shaken that men in venture capital or angel investment who have power over women founders, because they’re pitching for funding, that they would use this sort of power play to get what they want. I’m just outraged that some people in our community think it’s okay to be inappropriate in their dealings with women, when their relationships are supposed to be totally business-oriented. 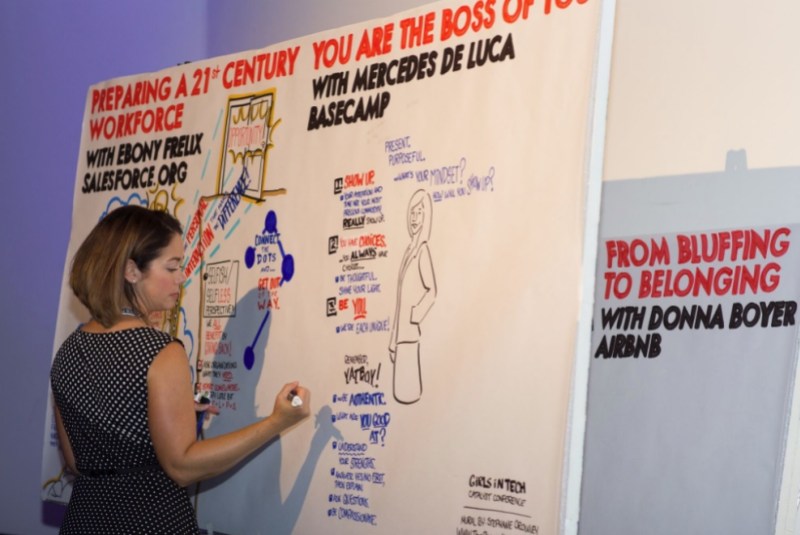 Above: Capturing talks about the cause of women at the Catalyst Conference.

VB: One thing that shocked me is that — in a lot of ways these are very important women, very accomplished, and very powerful in their own right. But they were less powerful than people who subjected them to this. It’s a flat expression of, “I’m more powerful than you, no matter what you think.”

Gascoigne: Because they’re asking for something. Those people have something that these women want or need in order to move their startups forward.

Along with the frustration and the anger I hold — part of the anger is due to the fact that I never spoke up myself. When I was dealing with a sexual harassment situation, I ended up doing a lot of research to see what could be done to stop this person. I was new to the whole experience. Basically, if you don’t have proof of someone doing or saying something inappropriate, you don’t have a case. In some cases certain people are very seasoned at harassment. It’s shocking and scary.

But I do feel that there’s a fundamental industry shift happening right now. It underscores what’s about to happen. Companies are going to be a lot more accountable, as I mentioned before, and hold their employees accountable. Executives are going to think twice before doing certain things or neglecting to enforce employee safety and security and privacy.

There are actionable things we can do to make sure that we keep this from happening in the future — palpable, tangible stuff. VCs should publish the percentage of their funds where they invest in women-led startups. VCs should hire more women. They should create a place where women can make anonymous complaints. I think a lot of tech companies and startups can focus on making sure that they enforce policies, and have their HR departments really focus on employees versus executives, on policies that protect employee safety and security, along with management and executive training so that — it’s like a fire drill. If something like this happens, what needs to be done to protect people who are being abused, harassed, or assaulted in the workplace?

That should be a given. That should already be activated, already at the forefront for all executives at every company. I’m just surprised that the startup industry hasn’t learned this yet.