As one of the world’s largest code-hosting platforms, GitHub needs little introduction — but fresh from reports that it’s looking to raise $200 million, thus valuing the company at $2 billion, the California-based company wants to talk more numbers.

Following a roundtable event to mark London Technology Week, GitHub revealed some figures about its global spread of visitors. It turns out that from the 32 million people who flock to its site each month, more than a third (36 percent) come from Europe — the “largest demographic of GitHub users around the world,” the company said. And looking at the bigger picture, almost three-quarters (74 percent) of all GitHub visitors emanate from outside the U.S.

That said, only ten percent of GitHub employees are based in Europe, an area served by a 30-person team spread across London, Amsterdam, Paris, and Berlin. While the company did launch its first physical office outside the U.S. last week, kicking off in Japan, it hasn’t revealed plans to open a hub in Europe quite yet. 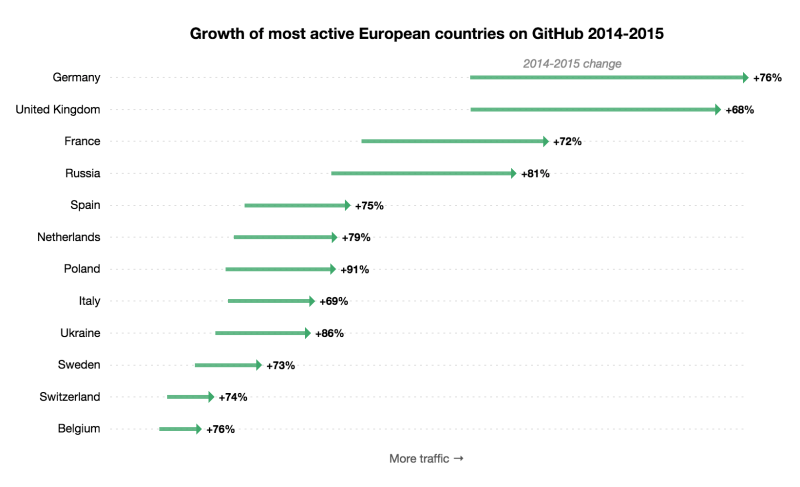 Above: GitHub in Europe

Visitors are, of course, different from users. On the actual registered “logged-in” users front, GitHub claims around 9.5 million people per month, but says that because it doesn’t require users to provide location data, it can only report on “anonymized global visit activity.” Using the global visitor-breakdown stats, however, this should give some indication as to its spread of actual active users.

Founded out of San Francisco in 2008, GitHub is used for its private and enterprise-focused code repositories, but perhaps is chiefly known for its public open-source libraries. Countless companies, governments, and organizations use GitHub to offer their code to the wider community.

Just last week, Facebook revealed it was open-sourcing Infer, a code-verification tool that squishes bugs in mobile apps, through GitHub — adding to its 200-plus projects on the platform. The social network’s head of open source, James Pearce, explained why the company is big on open source, citing ideology, innovation, and it being “good for business” as the key reasons. “It means we build better software, write better code, our engineers are able to work with more pride, and we’re able to retain the world’s best engineers because they know they can open-source their work,” he explained.

It’s clear that GitHub has emerged as a valuable brand in the development realm. To date, the company has raised $100 million, which is no drop in the ocean, but it’s a figure that could soon triple if recent rumors are anything to go by.