Updated with more details about Glam’s channel for men, which has been called “CodeBlue” internally — see image below left

Glam, the women-focused online ad network, is laying off 14 out of 200 employees, mostly in sales, reports by Valleywag and Silicon Alley Insider indicated today.

The cutbacks, while coming just seven months after Glam raised $85 million, marks the “popping” of the ad-network bubble, according to Valleywag. 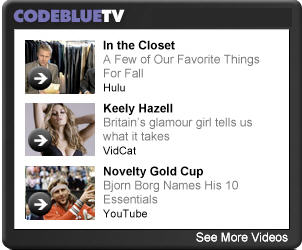 However, we haven’t heard much about any wild and lavish spending by the company, which is what Valleywag speculates is the reason for the layoffs.

We talked to chief executive Samir Arora today, and he confirmed the cuts, but put a different spin on them. He said that the company has routinely reviewed its workforce before the fourth quarter of each year, to make sure each employee is still in the right position, and trimming about 7 percent is in line with the cuts made last year.

Separately, Glam is preparing to launch a new product, or a men’s version of Glam (see early mockup of a button at left that points to videos contained by the channel). Company sources say that the layoffs are also part of an internal reorganization to get ready.

That’s not to say that the company’s immediate future won’t be chaotic. We’ve written about the aggressive moves by this company to expand over the last two years, and mentioned that a downturn in the economy could affect Glam’s efforts to construct a massive advertising company. A decline in online sales could cause this company to unravel.

Update: More details are emerging about the company and its plans:

First, we’re hearing the company is reporting revenue growth of 200 percent in the current quarter, compared to the same quarter last year.

Also, one of Glam’s goals is to get to EBITDA profitability in its “core business” by the fourth quarter of this year, another reason the cuts are being made, according to our source. We’re hearing Arora and the the exec team and founders volunteered to take at least a 20 percent reduction in compensation, with Arora halving his.

Moreover, Glam has the vast majority of its $20 million credit line still at its disposal — and so it continues to expand in places like the UK, Germany, Japan and France.

Finally, we’re hearing more about Glam’s product plans. It will launch two more “channels” shortly, one of which is focused on men. The men’s channel, which will be an ad network, together with content both owned in house as well as externally is called “CodeBlue” internally. It is expected to launch with a different name before the end of the year (plan is November). Glam is rumored to have already signed on Fox (Hulu), Sony Music, and MTV and is in discussions with other media companies. Like in the MySpace Music case, this may be a joint venture, or be wholly-owned by Glam.

It will be the third target demographic, after women, and African Americans.

The company boasts it reaches 44 million people with its current offering, with two billion ad impressions a month. It has lofty — some would say even hallucinatory — ambitions for its plan for Men. According to one internal target we’ve heard, it wants to reach 90 million people a month — although we haven’t confirmed whether that is an official target or not.

The insiders here in Silicon Valley seem to be divided evenly between those who think Glam, led by Arora (left), have hyped the company too much, and can’t be taken as a serious player, and those on the other hand, who have chosen to engage with him seriously. Notably, at Google’s Zeitgeist event last week — where Google wined and dined its top partners — Google placed Arora at the main table where Google’s top ad executives, top ad agencies, and even Google chief executive Eric Schmidt were also seated. Google hasn’t done that great at display advertising. Glam claims it has. Is this a case of Google wooing Arora, or of wanting to suck him dry of info — so that they launch their own network and kill Glam? Don’t know.

Image below is of the CodeBlue navigation bar.

Disclosure: VentureBeat recently employed a business manager who was related to one of Glam’s co-founders. However, he no longer works at VentureBeat.