Glam Media, the Brisbane network of sites that says it is the fastest growing property on the Web, is raising $200 million in fresh financing. It is also expected to announce a deal with Google tomorrow, which will let Google power search on Glam’s network sites.

A source forwarded VentureBeat a copy of the document Banc of America Securities is using to help Glam raise the financing. The document does not mention a valuation for the company, but some believe the company could be valued at $600 million or more. It should be raised in September.

Here’s a copy of the document. [Update: We’re now told the document is an early draft. There are three other banks on the deal, including Allen & Company, Deutsche Bank and Credit Suisse.]

We’ve written at length about Glam in the past (here, for example), and its success at representing a group of sites focused on woman, selling the advertising for them. We plan to write more about Glam shortly [update: here’s the follow-up piece]. The memo makes several key disclosures, including that the company is on track to make $21 million in revenue this year, but expects to make $150 million next year. It expects a loss (EBITA) of $3.7 million this year, but a proift $39.1 million next year (see chart below).

Glam Media says its network of publishers enjoy 19 million visits per month in the United States. Glam is also going to announce tomorrow a deal with Google, as part of Glam’s move to offer a new search feature for each site in its network. Glam itself will power search results for people wanting to search for site-specific content. However, Glam will rely on Google to let people to conduct Web-wide search. The Banc of America memo highlights the following:

* The fastest-growing web property in the United States with a year over year increase in unique visitors from 782,000 to over 19.1 million monthly unique visitors in June 2007 [this is faster than the initial increase of MySpace, the memo points out];

* # 1 in terms of traffic amongst women’s web properties within 20 months of launch, with a 23% lead over iVillage.com, which held the top ranking for over nine years; and a

* Partnership with Google enabling Glam to offer additional search and text advertising through its owned and operated websites and publisher network. 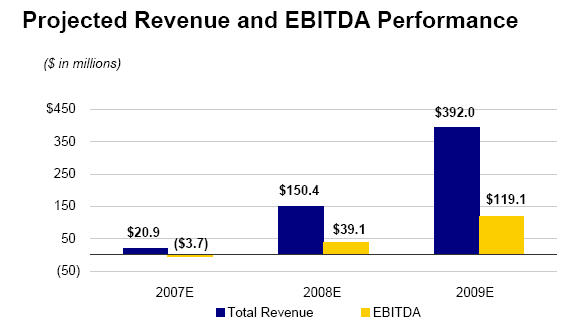