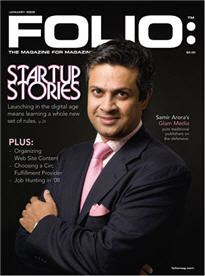 Glam, the controversial woman’s content and ad network run by Samir Arora (pictured left), is raising between $50-100 million in cash, and is expected to finalize the amount soon, we’ve confirmed with sources.

Along with that will be up to $100 million in debt, but the debt will be raised over the next year.

The news is in fact not new. We first reported Glam’s move to do so back in August, when the company emerged reporting a blitz of growth and boasting it was the fastest growing site on the Web. But we’re getting more details confirmed, as follows.

The company had originally sought to raise a mix of cash and debt, for a total $200 (see its prospectus, page 4), and that’s apparently still part of the plan. (Some reports earlier today didn’t account for the fact that Glam is also raising debt, and wrongly suggested Glam had lowered its sights).

Glam has created consternation in the industry. Glam is selling ads for scores of fashion and beauty sites, and sells ads for some of its own content sites too. Older competitors such as NBC/iVillage have looked on as Glam’s network has shot past their own, in terms of page views and unique viewers — though Glam doesn’t own most its sites outright but merely sells the ads on them. Glam has picked off top sales executives and created considerable animosity in the process — in fact, we’re hearing another big hire is about to be announced on Monday: a Yahoo top executive and holder of numerous Yahoo patents, in charge of display advertising technology. Glam has boosted its direct sales team to near 50, up from 5 last year. The Yahoo executive is designed to help Glam expand its technology platform team in Silicon Valley.

Glam’s chief executive Samir Arora (pictured above in January’s Folio’s magazine) is quite the slick salesman, habitually wearing pink, and with a penchant for French fashion shoes. His detractors paint him as an upstart whose network is more smoke and mirrors than the juggernaut he paints it out to be. See the recent Folio article here, and our pieces here and here for more on Glam’s model and the controversy around it.

Some reports suggest that Glam has sought to raise money at a near $1 billion valuation, but our sources have never confirmed that figure. We’re hearing Glam consistently got feedback during fundraising that it could raise money at a value of between $350 and $500 million, not more. Even that is high, considering Glam is mere four years old and was valued at $150 million a year ago. (Though IGN, a men’s/gaming site comparable to Glam in size, was purchased by Fox for $650 million in 2005).

Glam’s existing investors, including DAG Ventures, Draper Fisher Jurvetson, Accel Partners, and WaldenVC are all participating in the round, we’re told. DFJ’s Tim Draper is adding to the hype, going around saying Glam is the fastest growing company “on the face of the earth,” faster than his previous companies Skype and Hotmail.

We’re also hearing Glam has an annual revenue (run rate) of $40 million, and is aiming for $80 million or more this year. Valuations are tied to revenue, and media companies are typically valued at three or more times revenue, but rarely as much as ten. Glam lately has been trying to push itself toward a social network, which could give it a higher value than an traditional ad network because of the community that builds around it (though the jury appears to be out right now on how vibrant Glam can build a network, when much of the community lives around the individual blogs it represents).

The value question will also be dictated by whether Glam can claim “ownership” of the 44 million unique visitors it says it has globally. Traffic measurement company Comscore has decided to designate these visitors to Glam’s camp, even though Glam doesn’t own the sites of its network outright. Glam argues Comscore is correct to designate those uniques to Glam, because Glam retains an exclusive ad relationship with most of its network blogs (though it is true that it doesn’t have exclusive relationships with some of them).

See the table below, which shows the value of various companies in the network area, and the value per visitor, called the “visitor multiple.”Assume Glam raises money at $400-500M level, with monthly global unique visitors (to its network) of 44 million, that would give it a “visitor multiple” of 10 to 12, much lower than the median of 25, or 22 if you factor out the outlier, Facebook. But still, I think this is what Glam would like to argue and the question is whether investors will accept that (i.e., that Glam is a true network, and so should be compared against these other sites).

Finally, we’ve heard that Glam received an offer to be acquired a few weeks ago, in the range of $350 to $500 million by a large media company, but that it decided to go it alone instead.

One reason for the excitement around Glam is its sector’s growth. Women’s sites, along with politics, was the fastest growing audience categories in 2007, according to Comscore. And here Glam has doing better than the norm. Glam grew at 213 percent, while iVillage grew at 27 percent –again, that is, if you include both Glam’s and iVillage’s directly owned sites as well as their ad partner network sites.