Glam Media, the Brisbane, Calif. network of women’s online lifestyle, fashion and other blogs, said it has overtaken iVillage to become the number one women’s Web property.

It is also the fastest growing of the top 100 U.S. Web sites, according to traffic data to be released tomorrow by ComScore for the month of May.

Glam’s network had 17.3 million unique readers during May, compared to iVillage’s 17.1 million readers, according to the data. The rise of Glam Media has been quick. The four-year-old company fell into its groove two years ago, as more women built out blogs, and as Glam has lured them into its network. Glam now has about 350 magazines, websites, and blogs in its network, covering everything from shopping to beauty and health.

We initially expressed skepticism about this company’s prospects, after it raised financing on what seemed to be a very bubbly value of $150 million. After all, how could 50 employees command such a high value when all they’re doing is producing content, and when they don’t really own many of the properties in its network?

But then we visited with the company in January, and began to understand its model (see here for our story). Glam has negotiated long-term contracts with most the independently owned sites, and in return offers those sites highly paid advertising of between $12 and $20 per thousand views (CPM) — which is lucrative enough to keep most of them from straying. Glam keeps a portion of that advertising, though doesn’t disclose how much. It continues to build out fully-owned sites, too, and says it gets up to significant $35 CPM on those sites.

At that time, chief executive Samir Arora said he saw Glam headed toward a $500 million valuation, based on the value of comparable companies. Now he’s more bullish, saying Glam has effectively reached that goal within six months, and that its is worth is headed higher. He uses iVillage as a proxy: That company was sold for $650 million a year and a half ago, and its traffic has continued to grow strongly (see graphic below). Factoring in stock market performance, Arora estimates iVillage is now worth about $1.2 billion. And with Glam overtaking iVillage in traffic, well… 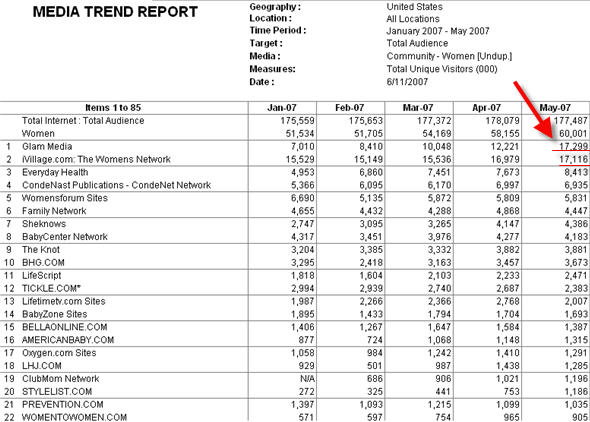 The trends helping Glam are strengthening, he says — as new blogs get created and advertisers search for new ways to reach readers beyond traditional media. “The deeper we go into this,” said Arora in an interview with VentureBeat last week, “the more it seems the fragmentation has increased. It is deeper and wider than we thought.”

Glam continues to build its ad network, including targeting technology so that advertisers know the age of the readers on Glam’s sites, along with other demographic and engagement data. Glam has signed a deal to run Google text ads on sites, beside its other premium and display advertising. It has affiliated with more than 90 other sites, with Hearst being a big one.

Without knowing more about the exact relationships it has with its network of blogs, it’s hard to tell how sound Arora’s value estimates are, and how sustainable this model will be if consumer spending falls, and advertising drops. It’s also hard to say what the barriers to entry by others players are. If Glam can command greater advertising rates because of more sophisticated targeting (due to the size of the network), it could enjoy the so-called network effect — and keep getting bigger. We’re not certain this will happen. However, Glam sure has momentum (see growth rate chart below).

Glam is making a big deal of its surge. Tomorrow, it launches a full-page ad campaign in the NYT, the WSJ and others to trumpet its surpassing of iVillage, the site that has held the No. 1 spot for more than eight years.

The traffic suggests Glam’s properties reach about 10 percent of the U.S. Internet population. 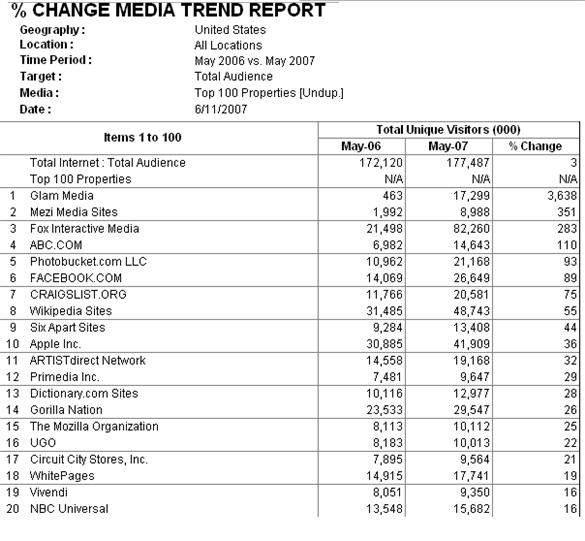 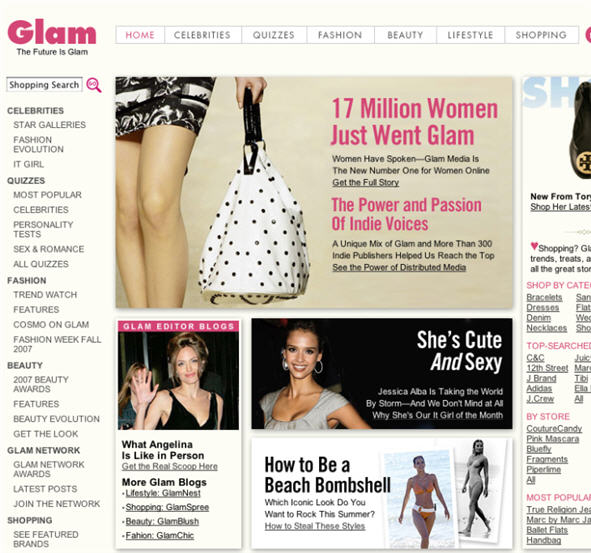