Glam Media, the controversial Silicon Valley company that says its network of woman-oriented sites is the fastest growing on the Web, has released a new set of features designed to boost traffic even more.

One is a Digg-like feature for recommending stories, only designed for non-geek woman. Call it the anti-Digg.

See our earlier coverage of the company, and the notable follow-up piece in Forbes about the company. What makes this company so interesting is that promises to be a raging success if it gains a certain critical mass in time — by signing up enough bloggers and ad deals that it can sustain itself after a its rapid buildup. Or, if the steam runs out of the economy, and spending on advertising dives, Glam could just as easily go down in flames. It is about to finish raising another $200 million.

Today, at the DEMO conference in San Diego, the company has released three more features. First is a new navigation bar, to make its expanding empire — now numbering 400 publishers — more navigable. The navigation bar organizes all content items according to whether they are articles, blogs, photos, quizzes, products or part of a specific theme area with its own channel, for example “health and wellness.” A blog item about health would fall under this channel, but would also fall under “blog,” for example. Glam will soon introduce video as a content type.

The move is significant because the content is all indexed and processed with tags, so that it can be better searched, including by search engines — all part of Glam’s effort to make its content rise higher in result rankings to give it more traffic as it tries to distance itself from competing networks like iVillage.

Second, Glam has introduced a “Story Box” feature, or a widget that shows what other “hot” content exists around the Glam network is relevant to the page the user is looking at. Glam’s Samir Arora says the box has been tested, and has already produced two billion ad impressions a month.

Finally, it has unveiled something called “Curate It,” which lets users recommend an article or other piece of content for others, similar to how Digg or Yelp let users recommend news or restaurants. However, Glam is holding to the reins, by picking professional curators to guide the content-ranking process.

Here’s how it works: Regular users can being curating, and then work their way up to get more status. As they do, their votes count more. They work themselves up from curator, to senior curator, to power curator. At that point, like eBay does with its “rising star” system, Glam steps in and anoints someone with “executive curator” status. Finally, the top step is “curator-in-chief.” See images below. In another twist, Glam lets users choose which curators they like, and which ones they don’t. That way, Glam can see which curators are maintaining a following and can reward them with promotions, accordingly.

Users can take their curates and distribute a “curate badge” as a widget on their site, on Myspace, Facebook, Glamspace, and so on. 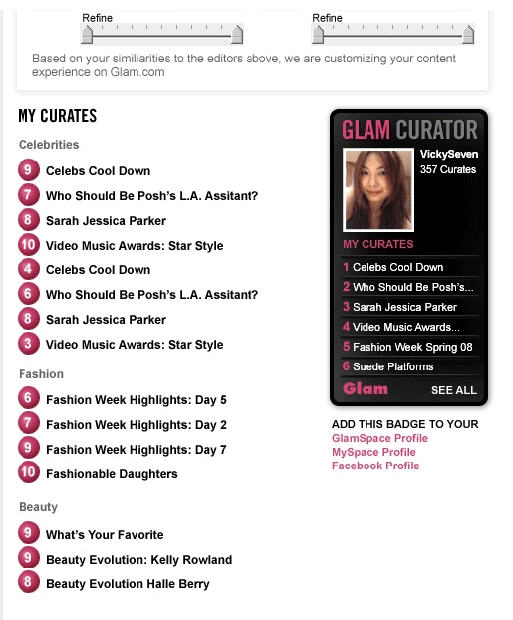 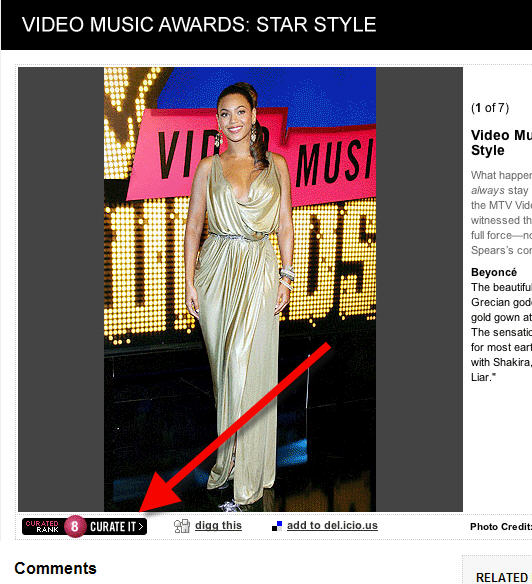