In an era when Web advertising networks are red hot, Glam lays claim to being one of the hottest.

Focused on gathering up female-oriented Web sites, and then selling advertising on their pages, Glam says it is the fastest growing property on the Web, and is about to sign a whopping $1 billion advertising deal.

But Glam is becoming a magnet for controversy. While investors appear ready to invest at high valuations (see our past coverage), Glam has also sparked ire from jealous competitors, who claim it is a sham. They say Glam is not a destination site, and just a network. Glam, meanwhile, says it never claimed to be a destination site — but spins the message differently: It says it has the largest “reach” among women on the Web.

To start with, Glam is now getting 20 million unique viewers, up from 782,000 about a year ago – a faster growth than even MySpace during the frenetic year before it was acquired by News Corp. Comscore, the traffic measurement company, backs up Glam’s claims. Now, Glam also is raising $200 million more in venture capital, and some insiders say Glam could be valued at $600 million or higher – something VentureBeat first reported earlier today. [See the full confidential memo here. Update: The memo is an early draft. We’re told four banks are now on the deal, including Allen & Co., Deutsche Bank and Credit Suisse.] 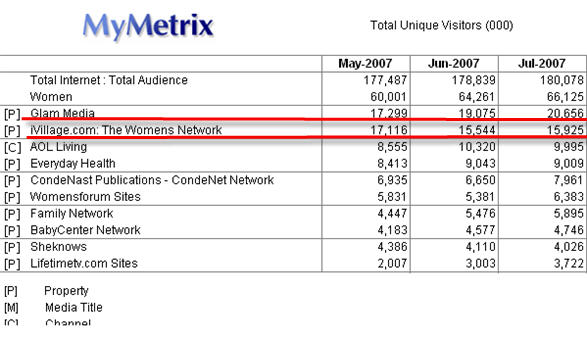 Tomorrow, Glam will announce a new deal with Google to provide Web results on Glam’s Web sites. Most significantly, however, Glam is about to close a $1 billion-plus advertising deal for its sites, VentureBeat has just learned. Glam will get between $500 million and $800 million in revenue from the deal over the next three years. We’re told negotiations are still under way, but that there have been at least two bids by major advertising companies.

Well, Glam has fierce critics. VentureBeat has spoken with at least three of its competitors. To them, Glam isn’t a Web property, so much as an ad network. Glam progress, they say, is driven by smooth, dapper chief executive Samir Arora, who tends toward ping-red shirts, Italian suits and French shoes — and has a riveting marketing spin. If you look at the sites Glam claims to “own,” they look very different from the sort of high-end professional female demographic Glam’s Arora likes to associate Glam with, these critics argue.

We obtained a copy of Glam’s Comscore breakdown of sites; it’s shown below. Note the sort of sites that show up prominently. Half of Glam’s page views, it turns out, come from MyYearbook, a social networking site. Some 6.5 percent come from Meez, an avatar site. There’s Dogster – a social network for dogs — and other questionable sites (see red arrows in graphic below). Take Free-Beauty-Tips.com, for example. At first glance, the site looks like a spam site. It features lists of links to articles loosely related to the theme of beauty and tips. The site’s name, together with links, allow it to feature highly within Google’s search results for “beauty tips”; it therefore draws all sort of traffic. Moreover, Glam has reportedly guaranteed sites such as Meez $200,000 a month in order to have its business. Says one critic, an anonymous competitor to Glam: “To me, Glam is Boo 2.0,” he says referring to Boo.com, the hyped fashion site of the late 1990s that crashed and burned after the Internet bubble burst. 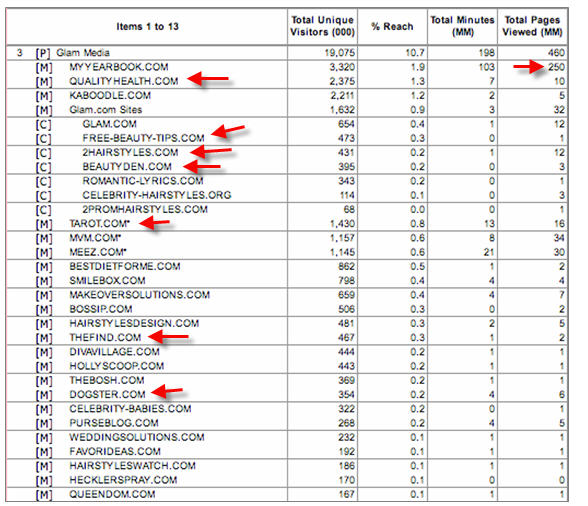 Competitor iVillage/NBC was until last month the largest woman-oriented network, until it was overtaken Glam, based on the number of unique visitors. IVillage executives say Glam’s claim that it enjoys $20-$30 CPM advertising rates on its core properties is bogus. Glam’s Arora, who says he can’t say much publicly these days because of his fund-raising mode (there are SEC regulations that govern what you can say) has insisted in past interviews that Glam is indeed getting those high rates.

Sugar Publishing and Federated Media Publishing (disclosure: Federated handles much of VentureBeat’s advertising), meanwhile, are about to announce the launch their own network to compete with Glam for its business, VentureBeat has learned. The network will be called the Sugar Network, and will be powered by FM, two inside sources said.

With Boo.com during the first Internet boom, there were clear signs of hype. The site itself was fraught with problems.

With Glam, however, it’s much harder to claim it’s a sham; it’s pulling in major revenue. One competitor begrudgingly conceded Glam appears to be doing a great job building a network. That’s what makes this an interesting story. A site network is a powerful concept, but also can be amorphous. If you turn a network into one like Google’s – where advertisers have an incentive to do business with you because you are the biggest, and offer the best targeting technology – then your lead can snowball. This is the so-called “network effect,” something that eBay perfected. However, right now, it’s too early to tell how vibrant Glam is. It doesn’t actually formally own the sites it has in the network. These sites can leave for other networks, usually with a notice of between a few months and a year. One site in its network, Kaboodle, for example, was just sold to Hearst, and so Glam will lose the right to sell ads exclusively for Kaboodle. Glam’s momentum, therefore, may be fleeting if it can’t convince sites in its network to stay.

One thing is clear. Glam’s Arora knows how to sell. He has founded and helped sell multiple businesses, including NetObjects. Arora’s message is slick. He’s offers sites a technology edge, with new search and advertising targeting technology, which we’ll get to in a minute. He also responds to critics of the sites in his network. MyYearbook, for example, features quizzes that produce highly valuable results for advertisers, he says. Quizzes engender a depth of engagement with readers that is core to Glam’s model, Arora says. He learned the value of quizzes from his time as a board member at Tickle, the dating site that was later sold to Monster. MyYearbook also is popular among young woman, part of the Glam’s targeted audience.

As for Free-Beauty-Tips.com, Arora says Glam bought it not for the links, but to acquire the skills of the site’s owner, a specialist in search engine optimization (SEO). Making the sites in Glam’s network more sophisticated about SEO is a service Glam wants to offer the sites, Arora said. Moreover, Free-Beauty-Tips is a recent acquisition, and Glam will be rolling out real content on that site by the end of the month (Glam showed us screenshots of the new design). Arora also insists the existing site is not a link farm, saying the links go to real articles. On Arora goes, down the list of questionable sites, explaining the logic behind why Glam has taken interest in each one of them (Meez, the avatar site, is desirable because it has young readers, and advertisers tell Glam they want to reach the “Y” generation, Arora explains). Finally, he makes no excuses about owning business of sites that may not be focused on woman. He plans to diversify Glam further in the future.

In most cases, Arora says, Glam has exclusive agreements in place to sell 100 percent of advertising on the sites in its network. The same isn’t true of competing sites like iVillage. IVillage claims it is the largest “destination” site for women, but that may not be true. IVillage lists Sugar Publishing as one of its sites, and Comscore counts Sugar’s traffic as belonging to iVillage. However iVillage neither owns Sugar nor runs 100 percent of its advertising. In fact, Sugar Publishing currently runs no advertising from iVillage. We contacted Brian Sugar, owner of Sugar Publishing for comment. IVillage ads will start showing up next month, he said, because the relationship with iVillage was agreed to only recently (last month). However, even then, Sugar’s sales staff will control major sponsorships, Sugar said – a strong indication that Sugar really shouldn’t be considered part of iVillage’s traffic. IVillage also appears to rely on Fastclick and Doubleclick to serve ads on some other sites. IVillage, reached for comment, said it controls 100 percent of the ad-sales on the sites (see partial list below). However, we’re told it does not control the business of Care2, BooksRags and TestCafe. Like Glam, IVillage has odd properties, such as Astrology.com, which makes up 2.5 million of its uniques; and iWin.com, a promotion/coupon site. Other promotion and questionnaire sites include Promotions.com (just bought by TheStreet, so iVillage will lose that property from its Comscore data), Smartsource.com, Webstakes, and TestCafe. IVillage, for its part, says these are all useful properties. 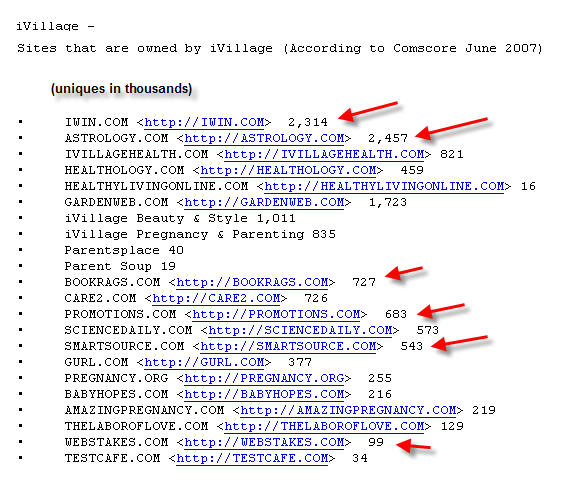 Meanwhile, Glam’s Arora says Glam will succeed because it has a technology edge, stemming form its Silicon Valley roots. It has developed new ad-serving technology for its 350 sites, which allows advertisers to not merely target Glam’s multiple woman sites, but also to target sites depending on the depth of engagement. Entertainment sites, for example, will have less engagement than certain social networking sites, where woman are performing daily tasks. Moreover, Glam can tell a sporting advertiser which Glam sites are focused on sports. Finally, if ads aren’t performing very well (in other words, woman readers aren’t clicking on them), those ads will be retired, and be placed on better performing sites. While other networks talk about having such technology, Arora says no other network has the woman-focused Web properties Glam does. Finally, Glam is launching a search widget (see details here) for sites so that users can search for content related to that specific site. For example, if it’s a beauty site, Glam lets users search articles within Glam’s beauty channel of sites. It is partnering with Google to offer full Web search. Glam has said it has an average CPM of $8 to $15 on its network sites, and about $27.5 CPM on the sites it owns outright, or those on Glam.com.

Finally, below is the traffic for PopSugar, the site that is about to launch its own ad network in conjunction with FM Publishing.

Mike Arrington at Techcrunch has just posted a critical piece about Glam, making many of the same points of the critics. Numbers are being thrown around that make this all a big game of smoke and mirrors, and every player is wrapped up in this. Note, for example, that Sugar claims 4.5 million unique visitors a month, as reported by Techcrunch. Brian Sugar tells us these numbers are based on Google analytics. However, Comscore, which is what advertisers rely on, shows a much lower number.