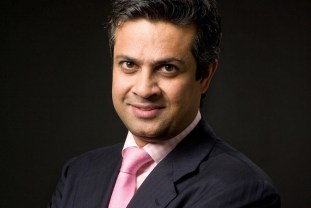 GlamAdapt is aimed at brand managers who aren’t focused on maximizing clicks, and who want to be seen paired with quality content instead of junkblogging and tag pages.

Most important, GlamAdapt isn’t just for Glam content. Any publisher can use GlamAdapt instead of, say, DoubleClick to serve display ads.

The premise behind GlamAdapt is that most Internet advertising is designed to make the robots happy, not the humans. “When you get someone from SEO to ill-formed content, they leave quickly,” Arora told me in a phone interview from New York. “You get high clickthrough, but low time on the site. How can you do a brand ad to someone who’s not sticking around?” Brand managers want to burn their logos and slogans into people’s minds, rather than teasing them to click a link.

GlamAdapt, which has been in development for almost two years, is explicitly designed not to maximize clicks, but to maximize what Arora calls “emotional” advertising. It supports video ads, smartphones, and the iPad in addition to desktop and laptop browsers. It’s in direct competition with Google’s DoubleClick empire.

The “adapt” in GlamAdapt proves it’s aimed at high-end brand managers who still swear by TV and print ads. “Our metrics will be reported both to the publisher and to the brand advertiser,” Arora said. Glam has partnered with a roomful of ad tech companies — Admeld, Bluekai, comScore, Dynamic Logic, Eyeblaster, Pictela, Pointroll, Quantcast, and SymphonyIRI Group — to serve ads and return stats.

“Compared to TV or print where it can take six months to a year to figure out how well a campaign is doing, they can learn and adapt right away.” This is old news to Web advertisers, but remember that around 90 percent of advertising dollars in America are still spent somewhere other than the Internet. That’s the money Glam is chasing.

Glam, founded in Silicon Valley in 2003, raised $50 million at a $750 million valuation in February, and is now preparing for an IPO.