Sausalito, Calif. startup Glassdoor has been pretty stealthy — it announced its second round of venture funding without revealing anything about its product. But now the Benchmark-backed company is finally launching Glassdoor.com in public testing mode. The site, it turns out, is a place where working schmoes (like me) can rate their employers and also share other useful data like salary information for specific jobs.

It’s easy to see the appeal. Anonymous reviews and ratings are popular in a lot of areas — Glassdoor compares itself to TripAdvisor, for example. Another such site that’s probably more familiar to VentureBeat readers is TheFunded, which has gotten a lot of attention for letting entrepreneurs anonymously review VCs; it’s not hard to see the parallel between entrepreneurs who want to expose an unfair VC with employees who want to expose unfair bosses, and there are a lot more employees than there are entrepreneurs. (Not everything on either site has to be negative, but I’m betting that disgruntled employees will be the most enthusiastic posters.) 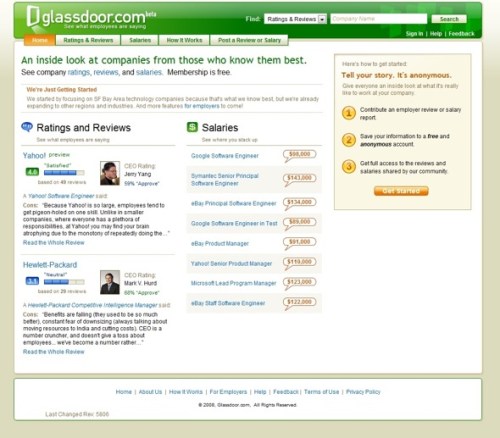 Glassdoor is hardly the first company in this market. Other employer-rating sites include JobValues and PingMyCompany, as well as Revyr, which is still in private testing. But the competition I’ve checked out is a lot more basic — the sites tend to have simple rating systems, and to let anyone or almost anyone vote. Glassdoor, on the other hand, wants data, not just complaints, and it’s based on a “give-to-get” model. Users need to enter either a detailed review or salary information for a job they’ve held in the last three years before they can access the rest of the site. That should help fill Glassdoor with information and also keep the comments and data at a higher than level “Google Sux!”

From the description, it sounds like its anonymous users could make Glassdoor both more entertaining and more informative than traditional job and salary sites. I’m happy to see any company that encourages people to share information about their jobs, as I think the salary numbers and the stories help everyone. And I hope Glassdoor keeps its quality standards high, but not too high.

You’ll get a chance to check out some of Glassdoor’s content for yourself before signing up; the site is making its information on Cisco, Google, Microsoft and Yahoo available to the general public.

Glassdoor is led by chief executive Robert Hohman, formerly president of Hotwire.com and engineering team leader at Expedia.com, and Board Chairman Richard Barton, who is also chief executive at real estate site Zillow.